A Legacy of Innovations

Since its founding, the business school at the University of Michigan has been a source of game-changing ideas. These are the stories of a few notable alumni and faculty members who thought big and acted boldly.

Groupon takes something everyone loves––coupons––and makes them even better. The mobile and online marketplace offers steep discounts on things to do, eat, see, and buy in 26 countries and 500 markets across the world. It has sold more than one billion units since launching in 2008, pumping more than $13 billion globally into local businesses, including $7 billion in North America alone. It has redefined how small business attracts and retain customers by providing them with customizable and scalable marketing tools and services.

Groupon––a combination of the word “group” and “coupon”––partly owes its success to co-founder and director Brad Keywell, BBA ’91/JD ’93. Keywell has also gone on to become a pioneer in the tech industry, co-founding several other tech companies; founding and chairing Chicago Ideas Week, a 200-speaker conference; and chairing the Future Founders Foundation. He is also on several boards and is a Trustee of the Zell Lurie Institute for Entrepreneurship at the Ross School of Business. 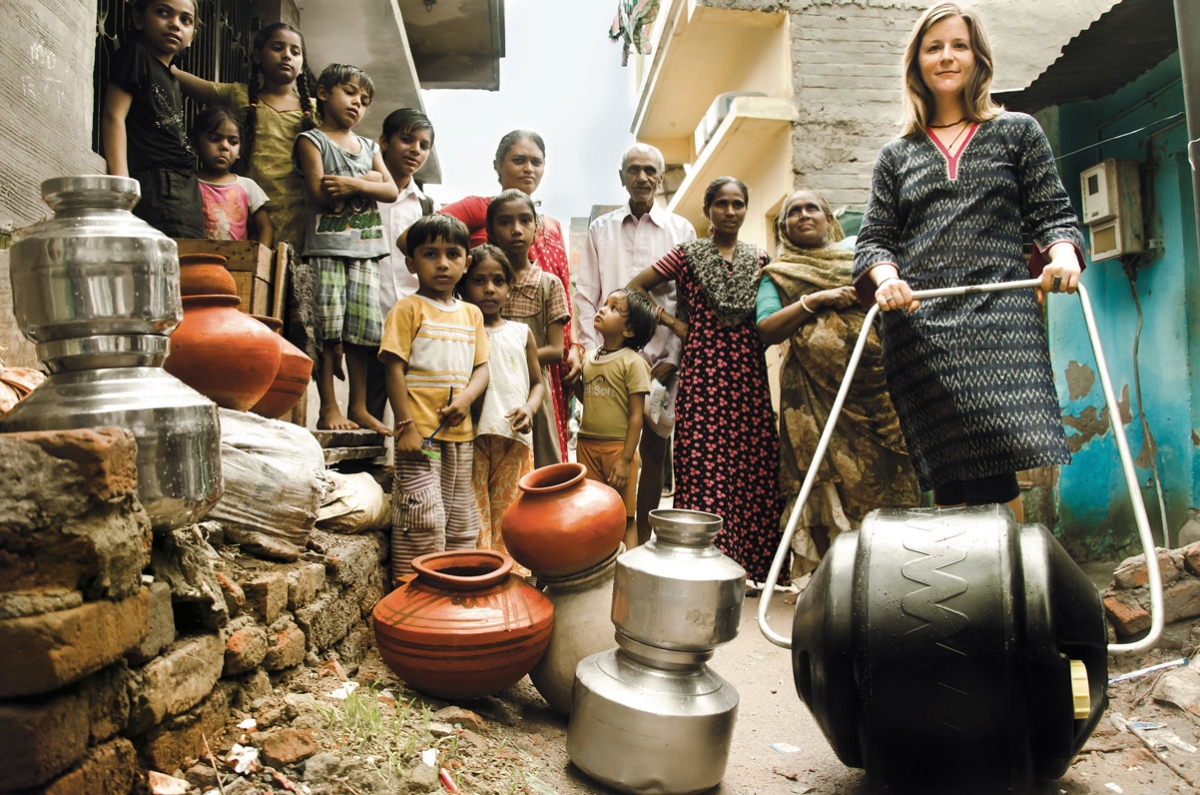 There are about one billion people in the world who walk long distances daily to get clean water for their families. This burden often falls to women and girls, who have to carry heavy containers on their heads. The time, physical, and health burdens of water collection combine to trap entire families in a cycle of poverty. But it doesn’t have to be that way, thanks to the WaterWheel, an invention by Cynthia Koenig, MS ’07/MBA ’11, and her company, Wello. The WaterWheel holds 45 liters of water and rolls easily on the ground, even over rough terrain. One trip can provide enough water for a family’s daily drinking needs for a week.

Koenig witnessed the water crisis firsthand while living in rural Guatemala and launched Wello as a nonprofit to fund water projects. At  Ross, Koenig evolved it into a hybrid social venture that won grants and awards and praise from former President Bill Clinton, among others. She also gave a TEDx talk on the WaterWheel. The design was co-created with customers in rural India over two years and is priced so that low-income people can afford it.  In 2016, Wello’s first year of commercial production, the company sold more than 10,000 WaterWheels.

On March 22 Wello announced that it has licensed India sales and manufacturing of the WaterWheel, to Mumbai-based Nilkamal, Asia’s largest producer of molded plastic products. Wello anticipates that by leveraging Nilkamal’s expertise in manufacturing and widespread pan-India distribution network, they will be able to better serve the market of over 250 million rural consumers across India who lack reliable access to safe water.

Since its development in 1994, the American Customer Satisfaction Index (ACSI) remains the only national, monthly cross-industry measure of customer satisfaction. It’s an integral tool used by the government, academic researchers, market analysts, corporations and consumers alike. It is even used as a predictor of stock market performance, GDP and Personal Consumption Expenditure growth.

Claes Fornell, the Donald C. Cook Distinguished Professor Emeritus of Business Administration at the Ross School of Business, developed the original model and methodology in 1989––the Swedish Customer Satisfaction Barometer. He worked with CFI Group, the University of Michigan’s National Quality Research Center, and the American Society for Quality in Milwaukee to create an American version in 1994. Fornell was also the founder of the private company ACSI, as well as ForeSee Results, CFI Group, and ACSI Funds, which was awarded the 2017 Fund Action ETF Innovation Award.

The idea behind the ACSI is simple, Fornell says. “In competitive markets, firms are rewarded by treating their customers well and punished for treating them badly. The rewards/punishments show up, not only in earnings, but also in stock prices and make equity markets better aligned with consumer utility, which, in turn, causes an upward shift in demand curves. As a result, consumer spending increases and so does economic growth,” he explains. “Investors in customer satisfaction don’t just beat the market, they also contribute to a stronger economy.”

If you have a good idea, stick with it. That’s a key takeaway from Hal Sperlich, BSE ’51/MBA ’61, who created an entirely new vehicle that’s now ubiquitous in suburban America  — the minivan.

But the first time he pitched the idea — a front-wheel drive vehicle that drove like a car but had plenty of room for kids and cargo — it fell on deaf ears. Those ears belonged to Henry Ford II, who at the time was, to be fair, facing an oil crisis and in a cost-cutting mode. Making the timing worse, relations between Ford II and Sperlich’s boss, Lee Iacocca, were souring fast.

“I felt horrible, because I was so passionate about it,” Sperlich told Automotive News in 2003.

Sperlich, a product wizard who also played a key role in developing the Mustang for Ford, got another chance. Ford II fired Sperlich in 1977, so he joined Chrysler as product chief. There, the timing was much better, even though the company faced a financial crisis. Chrysler had the kind of engine and transmission a minivan needed. And the company had already been working on one, though with an entirely different design and structure. The project gained momentum when Sperlich’s former boss, Iacocca, was hired to lead Chrysler.

The minivan debuted in 1983, playing a major role in the turnaround of Chrysler in the 1980s. Today it remains one of Chrysler’s best-selling vehicles and was imitated by nearly all major automakers, including Ford. Chrysler’s newest minivan, the Pacifica, is collecting numerous industry accolades. Sperlich became president of Chrysler in 1984, retiring in 1988. 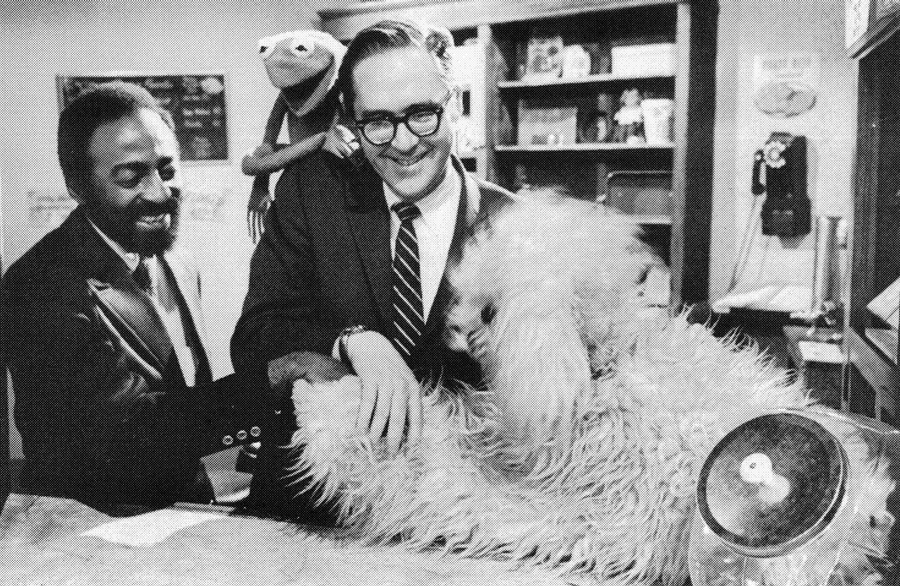 “Sunny day, chasing the clouds away…” That tune probably brings back warm memories of the comforting educational TV program you watched while sitting cross-legged on the carpet, sipping a juice box. It’s the opening song for Sesame Street, the beloved children’s TV show still going strong after 48 years with 850,000 viewers per episode––and a Michigan Ross alum was there to start it all.

David D. Connell, BBA ’55/MA ’56, was Sesame Street’s first executive producer. He was a key player in the conception, planning, and launch of the genre-creating children’s program, which was designed with the input of educators and psychologists to encourage the educational development of inner-city preschool-age children. The show demonstrated remarkable learning gains in its young viewers over the course of just one season, an achievement that still continues today.

Equally impressive was the show’s deftness within its tiny operating budget. In the 1971 issue of Dividend, Connell thoroughly explained the show’s cost-cutting, research-based tactics, which resulted in the show shaving $1 million off the cost of the original $8 million budget.

“In our first season of telecasts we reached some seven million children between the ages of 3 and 5 – at a cost of less than one cent per day per child,” he wrote. “We think that is about the best educational bargain in history.”

Connell passed away in 1995. He was lauded in a New York Times obituary for his roles in founding and producing educational programs, including The Electric Company and Square One TV. He won five Emmy awards and was nominated for 20 more during his career.

It’s one thing to create a new product, another to create an entire industry. But that’s what Eugene Power, BA ’27/MBA ’30/ScDHon ’71 did. Power founded University Microfilms in 1938 and effectively established the database publishing industry. He pioneered the use of microfilm to store and reproduce scholarly writings, then combined microfilm with xerography. That not only drastically cut the cost of scholarly publishing but also helped spread cutting-edge research to a wider audience, and kept previously crumbling out-of-print editions of books, and papers, available for use.

During World War II Power focused on microfilming rare books and other printed materials in British libraries to save them from bombing raids. He eventually sold University Microfilms to Xerox Corp. in 1962 for $8 million. Power also served two terms as a U-M regent and was president of the Association of Governing Boards of Universities and Colleges. President Lyndon Johnson appointed him to the National Council on the Humanities.

In Ann Arbor, he and his family gave the Power Center for the Performing Arts to the University of Michigan and he began the Ann Arbor Summer Festival. He also established the Power Foundation to further his philanthropic work, which included funding exchange programs between U-M and Cambridge University in Great Britain. He died in 1993 at the age of 88.

There was a time when the idea that accountants should interpret and analyze numbers was anathema. But the late Professor William Paton thought accountants should be more than bookkeepers, and he helped usher the field into the modern era. Paton was professor of accounting and economics at U-M from 1917-1959 (with a few brief interruptions) and one of the first to argue that accounting shouldn’t be limited to developing simplistic rules for preparing balance sheets and income statements. Paton saw accounting as a sophisticated process that went hand in hand with economic theory, modern corporate finance and advising businesses.

His view prevailed and today accounting is the language of business that informs market and policy decisions for all companies.

Paton’s prolific and persuasive writing and long tenure teaching future leaders gave him a profound impact on the profession. He was named Accounting Educator of the Century by the American Institute of Certified Public Accountants in 1987. Today the Paton Center at Ross honors his legacy by supporting innovative research and work in accounting. Paton died in 1991 at the age of 101.