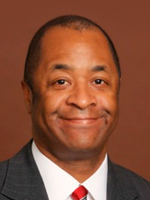 Cecil Shepherd is a client advisor in the Corporate & Investment Bank at JPMorgan in New York City. He is also president of the Michigan Ross Alumni Club of New York, a position he has held since October 2000, six months after his graduation. While a student at Ross, Cecil was VP, finance in the Ross Student Government Association, and VP, sales and trading in the Finance Club. He was also a member of the Consulting Club and the Black Business Students Association. Cecil did his summer associate internship in the capital markets rotational program at Lehman Brothers, and joined that firm’s corporate bond trading desk upon graduation from Michigan Ross. After Lehman Brothers, Cecil spent the next eight years at Morgan Stanley as a member of the client coverage team in prime brokerage, covering the firm’s hedge fund clients.

A native New Yorker, Cecil graduated from Pace University with a BBA in finance, and joined Bear Stearns in Manhattan as a staff accountant in correspondent clearing upon graduation. He later went on to work at the former Chase Manhattan Bank as an accounting analyst, covering FX traders of Canadians, Bunds, Gilts and JGBs. In 2009, Cecil completed the risk management program at Columbia Business School, and is currently a CFA candidate. He loves watching Michigan football and playing tennis. Cecil’s most memorable moments include being a contestant on “The Price is Right” and watching Michigan pull off a huge upset win over Ohio State in the 2003 game at the Big House.