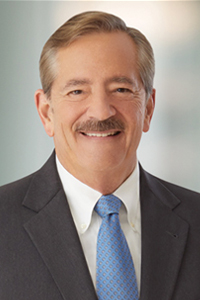 Stephen W. Sanger is chairman at Wells Fargo, a position he was elected to in October 2016 after serving on the board since 2003. He is also a director at Target Corporation (since 2001) and Pfizer (since 2009). Sanger served as chairman and chief executive officer of General Mills, Inc., during the final 13 years of his 34-year career with the company. During his tenure as CEO, the company’s net sales nearly tripled from $5 to $14 billion and its global workforce grew from 10 to 30 thousand employees. Perhaps his greatest legacy at General Mills was his fostering of a culture that attracted and developed great leaders. The company was regularly listed among Fortune’s Most Admired Companies and 100 Best Places to Work, and in 2007 and 2009 it was ranked No. 6 and No. 3 in Fortune’s list of the top global companies for the development of leaders.

Steve and his wife Karen Sanger extended that legacy of leadership development in 2015, when they donated $20 million to the University of Michigan’s Ross School of Business to found the Sanger Leadership Center, which is dedicated to developing leaders with the mindset, skill set, and personal vision to make a positive difference in the world.