The Building Blocks of Business Ethics 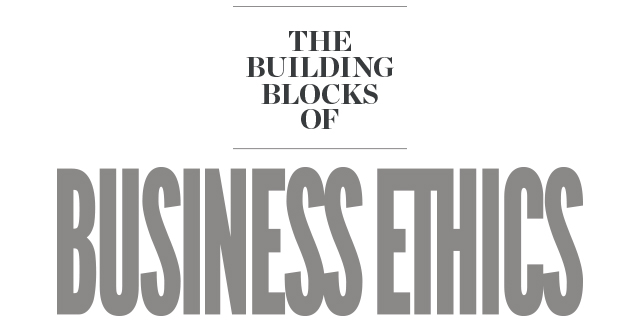 Your company probably has an ethics policy. That’s nice, but it does little to prevent bad actions.

Michigan Ross professors say we need to rethink how morals are valued in the workplace to create a culture of ethics.

Corporate corruption, though far from the norm, is still rampant in the headlines. Recent scandals at soccer governing body FIFA and Japanese electronics giant Toshiba have taken down top executives and engendered worldwide scorn.

Meanwhile, there’s still uneasiness in the corporate world talking about values and morals in the workplace. Competency is the currency at work, and behavior is often a secondary consideration.

To Michigan Ross Professors David Mayer and Cindy Schipani, those two trends aren’t a coincidence. Placing equal value on ethics and profits, giving employees a voice, and leading by example will go a long way toward fewer scandal headlines, they say.

“When you think about relationships outside work, you want to be with a good person. In business competence tends to trump being a good person,” says Mayer, professor of management and organizations. “And if you let a winner-take-all mentality dominate your culture, it’s amazing what people become comfortable with in the name of competition.”

Start at the Top

The best way to bolster ethics in business is to build it into your corporate culture, and that has to start at the top.z

“It seems like a small a change, but if it comes from the top and winds through the organization, it can change behavior,” she says.

Mayer also says companies need to embrace talking about subjects like morals and values. People should be their entire person at work and not have to check their identity at the door.

“There’s this morality mute button in the workplace, and it doesn’t help,” Mayer says. “The business world tends to get stripped of moral language, and that has implications for how people act. We need leaders who aren’t afraid to talk about values.”

Making sure ethics are a priority from top to bottom is easier if you hire people aligned with the company’s values. Mayer says this begins in the job interview with questions that don’t have obvious “correct” answers. This can give you an idea of the person’s values.

“You can ask if they looked at your company’s website to see what the company’s values and culture are like,” Mayer says. “You can ask questions that get to their sense of community and if they’re interested in helping others.”

Incentives also need to match company values. Tying compensation solely to landing a contract invites abuse of the system, Schipani says. Instead, incentives should also be based on things like customer satisfaction and product knowledge, in addition to closing deals.

Whom the company promotes is critical. This is where valuing morals as well as competence really matters, Mayer says.

“Who gets into leadership positions has such a big influence on how your organization operates,” he says. “If someone who is rude or cuts corners but is a high performer gets promoted, that really says much more than policy or messages from the CEO. Employees are impacted most by their immediate supervisor.”

It’s also important to give employees a voice, Schipani says. People have to know they can speak up when they have concerns and they have to have a safe place to turn. Workplaces that stifle employee voices suffer higher turnover, and the physical health of employees suffers, Schipani’s research shows.

It also can prevent scandals from brewing, since small lapses in judgment can be corrected quickly.

“If employees feel they can speak up, it not only makes for a healthier workplace, it also eradicates problems before they become big and public,” she says.

It’s also important to think hard about your own actions. When you’re under pressure and you’re in a gray area, it’s time re-think and consult others, Mayer says. Be aware that you’re more likely to take a shortcut when you’re stressed or tired.

“If you wrestle with an ethical decision and the answer you come to is aligned with your own self-interest, it’s probably a good idea to revisit it, either with yourself or by talking to someone else,” he says.

The business case for creating a culture of ethics is clear, but the motivation should go beyond that, Mayer says.

For example, research shows people who become vegetarians for moral reasons are more likely to stick with it than people who do it for health reasons.

So it’s OK to moralize business decisions the way we do in other areas of life.

Schipani says the default for most people is to do the right thing. Few people involved in a scandal went into business thinking they were going to cheat. That’s why leadership, training, hiring, culture, and promotions are so important.

“I don’t believe students or executives go into a situation thinking, ‘I’m going to see what I can get away with today,’ but if you start cutting corners you may find yourself on a slippery slope, and it’s very difficult to climb back up,” she says.

Does your company have a culture of ethics? This checklist, based on research by Professor David Mayer, can help you figure that out. In each of these functions, mark all the statements that apply to your company. The more statements you mark, the stronger your organization is in making ethics a cornerstone of doing business.