What happens when companies in the same industry have ownership in common?
Thought in Action featuring Martin Schmalz
Share 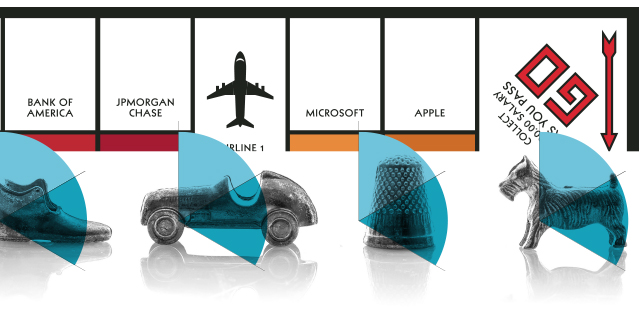 New research from Michigan Ross Professor Martin Schmalz reveals a side effect of the expansive growth of institutional investors.

If you owned two companies in the same industry, would you make them compete? Probably not — because both make higher profits if they don’t. 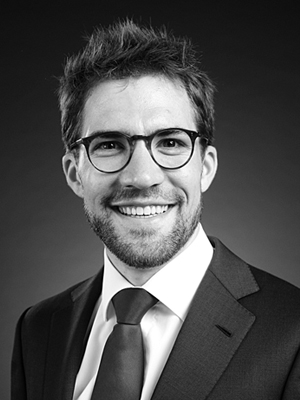 Antitrust legislation is supposed to prevent such anticompetitive behavior. But a side effect of the mutual fund industry explosion has been the creation of just such a situation, according to new research from Michigan Ross Professor Martin Schmalz and co-authors Jose Azar and Isabel Tecu, both of Charles River Associates.

Institutional investors like BlackRock, Fidelity, and Vanguard hold nearly 80 percent of the shares of public companies in the U.S. as they put 401(k)s and other private investments to work.

That’s good for investors, but it might be bad for consumers and the economy as a whole, Schmalz says. Natural competitors in some industries have nearly identical top shareholders, including Apple and Microsoft, CVS and Walgreens, and the largest three U.S. banks.

Schmalz wondered if such common ownership had an effect on consumer prices, which would be the case if companies with common shareholders backed off from competing with each other.

His analysis of airline ticket prices — chosen because of the richness and public availability of data — shows it does. Prices go up and quantity goes down when the airlines competing on a given route are more commonly owned by the same set of investors. Conversely, when a competitor that is owned by different investors enters the route, prices decrease and the market becomes more competitive again.

The study has received increased attention lately as the U.S. Department of Justice investigates airlines for possible collusion.

Schmalz’s research team found that prices on routes dominated by airlines with common shareholders were 5 percent higher, compared with a scenario where competitors have disjoint ownership. Passenger volume was 6 percent lower. Both effects are consistent with monopolistic rent-seeking by commonly owned firms.

“Antitrust law is focused on whether company A (and) company B merge,” says Schmalz, assistant professor of finance. “But when they have the same shareholders, it might not matter much because they’re almost the same company anyway, just with a different name.” 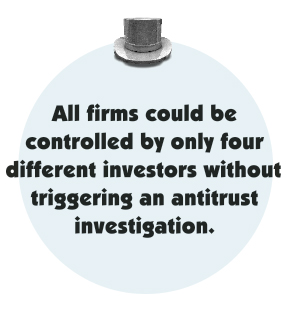 The finding has major implications for antitrust law, which allows any institutional investor to hold 15 percent of the controlling shares of any company without informing antitrust authorities. That is, all firms could be controlled by only four different investors without triggering an antitrust investigation.

The reason for this rule may be that many until now assumed that most institutional investors are passive and therefore don’t influence firm decisions. But Schmalz says observers may be confusing passive investing with passive ownership.

“I wouldn’t call them passive owners,” he says. “They say themselves that they are passive investors, but active owners. They vote on the board makeup, and they discuss business topics and strategy with the executives. They are the biggest shareholders. Why would we think that the firms they own don’t act according to their shareholders’ economic interests?”

“When they wrote the Hart-Scott-Rodino Antitrust Improvements Act in the 1970s, the asset management companies were not nearly as large as they are today — many of them didn’t even exist,” Schmalz says. “This is something that has kind of flown under the radar for the past 30 years.”

Schmalz says the price increase on routes where airlines have common ownership shouldn’t be a surprise to anyone.

“It’s basic economics,” he says. “If there are only two gas stations in a town, one might undercut the other in price and gain market share, then the other will follow and gain the share back, and this goes on until they get to a point where both get to margin cost and have to stop. That’s competition. But imagine a single investor owns both gas stations. Then neither gas station has an incentive to cut prices and steal market share from the other. Both optimally act like a monopolist. Monopolies produce fewer goods and charge higher prices. That’s why there is a social cost to having a few investors own all the firms.”