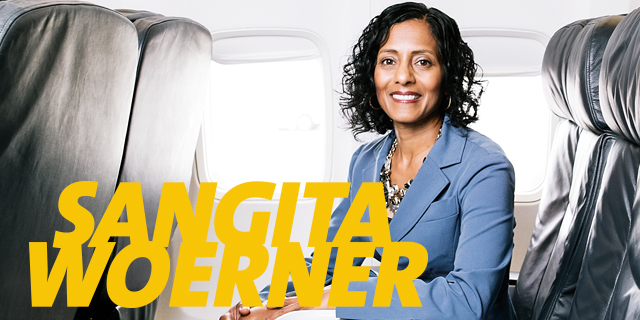 When you're leading a company's marketing efforts, it must make things easy if the brand is really well-known and well-regarded. Right?

Sangita Woerner knows. A ’91 Ross BBA graduate, she gained experience in brand management on a variety of popular Unilever consumer products. Most recently, she helped lead marketing and brand management efforts for Starbucks. And now, she is vice president for marketing at Alaska Airlines, which recently ranked No. 1 in J.D. Power's customer satisfaction survey of traditional air carriers--for the eighth year in a row.

Whether your brand leads its class in customer happiness or whether it's got a ways to go -- either way, marketing is challenging, Woerner notes.

“It’s all about trying to continually delight the customer. For a stronger brand, you have to continually one-up yourself -- next year, the year after, and so forth,” she says.

Woerner grew up in Dearborn Heights, Mich., where her parents emigrated from India. When it came time to choose a college, Michigan’s mix of top academics and top athletics proved to be a natural fit: “Not many schools have that kind of combination.” In fact, a favorite college memory came her sophomore year, when the Michigan men’s basketball team won the national championship.

Reflecting on her education at Ross, Woerner says one lesson that still resonates today is the importance of teamwork: how to build the right team, how to work together, and so on, especially the value of collaborating to find a solution when “there’s no right answer,” she says. “It’s not always black and white. It’s an art rather than a science sometimes.”

After graduation, Woerner gravitated to brand management with Unilever, working in different capacities on major brands like Dove, Suave, and Degree. Then she spent several years with Starbucks, most recently as vice president of global coffee brand management.

She was attracted to her current role at Seattle-based Alaska Airlines, in part, because it offered an opportunity to focus on more aspects of the customer experience, at a company that people feel very strongly about.

“It’s a very locally loved airline,” Woerner says. “The amount of people you meet who say ‘I love Alaska Airlines!’ is pretty incredible.”

As head of marketing for Alaska Airlines, Woerner oversees big-picture items like brand strategy, advertising, sponsorships, and the company’s loyalty program. But it goes deeper than that.

Not having a lot of room to improve means you have to focus even more closely on all the little things. Alaska Airlines’ marketing efforts focus at a micro level on every possible aspect of the customer experience -- including Wi-Fi, in-flight meals, and even details like what the flight attendants wear.

“Airline travel can be hard for people,” Woerner notes. “You’re with that customer for a long period of time.”

“The different thing about Alaska Airlines, and about the airline industry in general, is that there are so many different customer touch points that can make or break the experience. How do we think through each one in a flight? How do we consistently delight them and give them what they need? How do we really drive that outstanding customer experience on the day of travel?”

That attention to detail pays off. In addition to the J.D. Power rankings and the comments from happy customers, Alaska Airlines’ passenger count was up nearly 10 percent in the first six months of this year.

Of course, even the most dedicated airline can’t control every aspect of a passenger’s experience. The airports obviously play a large role. Woerner says that Alaska Airlines partners very closely with the airports it serves:  “It’s about having the right relationships with our hub and focus airports along the West Coast and in the state of Alaska.”

In the next few years, Woerner expects the same focus exhibited by Alaska Airlines to continue spreading to other carriers. The business is relatively healthy these days, she notes, so the industry in general may be able to concentrate more on fliers’ experiences: “It’s all about trying to continually delight the customer.”