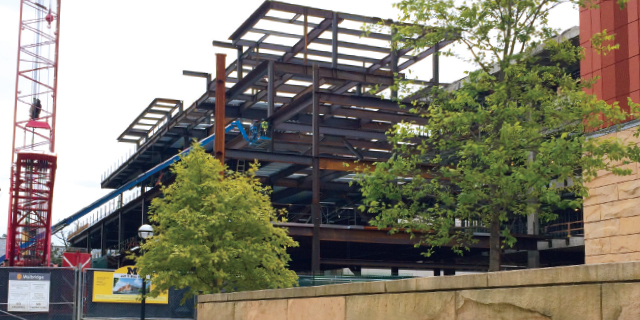 The new Ross School of Business building opened in 2009, with Ross’ first $100 million gift as the critical element that created a state-of-the-art home for the school’s core functions — teaching and learning.

And now — with substantial funding from the second $100 million Ross gift — we’re bringing the rest of the business campus up to the standard set by the Ross building. Work has already begun, with construction of the donor-funded project scheduled to wrap up in August 2016.

A modern, five-story structure is going up in place of the building known as the Electronic Education and Resources Building, the Computer and Executive Education Building, or simply the “E” building. The new facility will be named Jeff T. Blau Hall. The Kresge building will be completely redone both inside and out.

The two structures will be much more integrated to function as one, although they will retain separate names. The single, long, disjointed corridor of the past will be replaced by a cohesive east/west as well as a north/south hallway, creating a much more open and collaborative design.

The goal is for students, faculty, alumni, staff, and corporate partners to easily meet, collaborate, and work in a modern facility.

“I’m at Ross a lot and the facilities are not even comparable to when I was there,” says Deloitte’s Ho. “It’s not even recognizable. When you come back, you feel a real a sense of pride.”