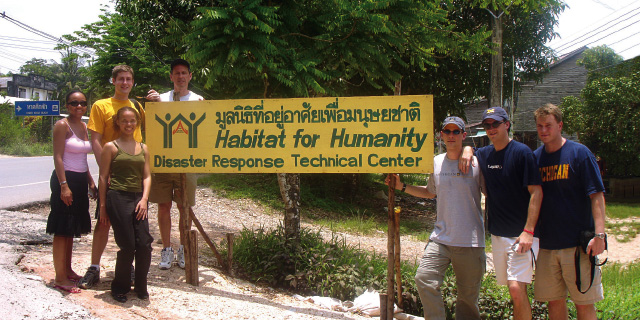 MAP projects are often transformative experiences, but one in particular stands out for Professor Len Middleton, a longtime MAP advisor.

After the deadly December 2004 tsunami in Asia, Habitat for Humanity wondered if it should get involved in disaster response. It wasn’t an area the home-building charity had been involved in, so it asked for a MAP team in 2005 to study the question.

The six-student team saw firsthand the devastation in Phuket, Thailand, and heard heartbreaking stories in addition to working on their business analysis.

“This was life-changing,” says Middleton. “Seeing the aftermath of that tsunami changed everyone. It gave the students a social ethos you really like to see. They took their business knowledge and skills and applied them in a way that could really help people.”

The team presented their recommendations to Habitat, finding there was great need for an organization to take the lead on temporary and permanent housing after natural disasters. One month after the team presented the plan, the Habitat board heeded the advice of the MAP team and created a disaster response group.

Only a few months later, the Habitat MAP team’s disaster response plan was soon put to the test after Hurricane Katrina hit the U.S. gulf coast later in August 2005.

One of the MAP team’s recommendations was for a follow-up project.

“The team working on disaster response noticed there wasn’t a main disaster relief council,” Middleton says. “You had 10-12 major NGOs working independently and nothing was organized. The next MAP team worked with Habitat to create a plan on how to bring the major nonprofits together within 24 to 48 hours after a natural disaster. We didn’t do anything magical. It just took an outside group to say, ‘Time out. You all need to sit at the table together first.’ Today when a major disaster occurs, the council immediately comes together to execute its response.

“I’m just so proud of the work these teams did and how they played a major role in making disaster relief better.”