John Thieme Thomas, BBA ’57/MBA ’58, was recently named Winnetka/Northfield, Ill. Man of the Year. This recognizes his extensive and ongoing public service over the past 25+ years. He has served on local government elective and appointed boards as well as many pro-bono boards. He has been, and continues to be, active in aiding others with addiction challenges.

Eric Flamholtz, PhD ’69, founded Management Systems Global Affiliates to extend his career legacy by training, licensing, and certifying consultants and  professors around the world in the frameworks, methodologies, and tools he has developed, validated, and applied during the past 40 years. These methods and tools are described in a recent book titled Growing Pains: Building Sustainably Successful Organizations (Wiley, 2016). The firm currently has affiliates and associates in Argentina, Bulgaria, China, Israel, Italy, Kazakhstan, Poland, Russia, Ukraine, and Vietnam. He also recently co-authored Building Family Business Champions (Stanford University Press, 2016).

Mark Vonderembse, PhD ’79, retired in 2013 after 38 years at the University of Toledo, more than 150 publications, and 50 research grants totaling more than $15 million. A study done in 2009 ranked him third in the world in publications in the Journal of Operations Management, which is regarded by many as the best journal in the field. He is publishing his fifth book, A Healthcare Solution: A Patient-Centered, Resource Management Perspective, this fall. He is also under contract for a new book on higher education.

An article by Howard Prager, MBA ’80, titled “How Do We Fix Our Leadership Crisis?” was chosen as the feature article of the March 2016 TD (Talent Development) Journal. He is president of the Advance Learning Group, has written extensively on leadership, and won awards for leadership development. Read the article

Bill Schwartz, BBA '81, was recently named director of Clinical Application Services at Children's Hospital Colorado. Children's Colorado, located in metro Denver, was recently named one of the nation's Top 10 Best Children's Hospitals on the U.S. News & World Report 2016-17 Honor Roll. As director, Bill leads the implementation and support of the clinical software systems the hospitals and clinics use to care for kids at all ages and stages of life. Previously, Bill spent the last 30 years in software engineering and enterprise IT management, including seven years in senior healthcare IT leadership roles at Catholic Health Initiatives. 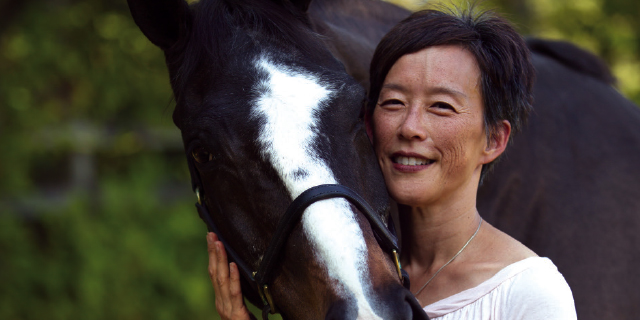 Eve M. Tai, BBA ’83, was recently appointed senior director of philanthropy, western region, for the Humane Society of the United States (HSUS). Based in Seattle, Eve will be responsible for raising major gifts to support animal welfare efforts across a wide variety of sectors. Previously, Eve was director of philanthropy for The Nature Conservancy's Asia Pacific region. A lifelong animal lover, Eve's work at HSUS is dedicated to the memory of her beloved three-legged pit bull, Olive. Eve spends time practicing yoga, riding dressage, and drinking Washington state wines. She can be reached at eveseattle@gmail.com.

Jennifer L. Sherman, BBA ’86/JD ’89, has been named president and chief executive officer of Federal Signal Corporation (NYSE:FSS), a leader in environmental and safety solutions. She also joined the company’s Board of Directors. Since joining Federal Signal in 1994, Jennifer has held a variety of positions including chief operating officer, chief administrative officer, senior vice president, general counsel, and secretary. She is also a director of Franklin Electric Co. (NYSE:FELE).

Roshunda Price, BBA ’87/JD ’93, has joined Jaffe Raitt Heuer & Weiss, P.C., as a partner in the firm’s corporate and real estate practice groups. She will focus on advising clients on a variety of corporate and real estate matters. Prior to joining Jaffe, she served as vice president and assistant general counsel of the Detroit Medical Center and clinical assistant professor and director of the urban communities clinical law program at the University of Michigan Law School.

Eric Schoenfeld, BBA ’87, has been named co-chair of Tannenbaum Helpern’s real estate, construction, and environmental law practice. Eric represents national and regional developers, private equity funds, and property owners in connection with real estate investments, including sales and acquisitions, debt and equity financings, development, and leasing. He also represents corporations and other organizations in their leasing of office, retail, and industrial space for business operations and related facility management activities.

Sarah Raiss, BS ’79/MBA ’87, was named to the National Association of Corporate Directors’ Directorship 100 list for 2015. This list names the most influential directors and governance-related professionals. Sarah was one of 50 corporate directors to be named. A gala celebration took place in New York last December. For more information: www.nacdonline.org

Paul Selvin, BBA ’89, a managing director of wealth management for Merrill Lynch in New York, was named by Barron's magazine to its 2016 list of "America's Top 1,200 Advisors." The tribute recognizes that he is among the nation's best in successfully working with clients to help them manage wealth and achieve their financial goals.

Valerie Barker Waller, MBA ’89, has been named senior vice president and chief marketing officer for YMCA of the USA, based in Chicago. In this role, she is responsible for identifying and creating opportunities to build the Y brand through strategic partnerships, public engagement, and collaboration with YMCAs across the country. Her previous positions include leadership roles at the United Way of Metropolitan Chicago, United Airlines, and the Museum of Science and Industry. She would love to have classmates and other Ross alums share their “Y” stories with her and welcomes the opportunity to connect at valerie.waller@ymca.net. 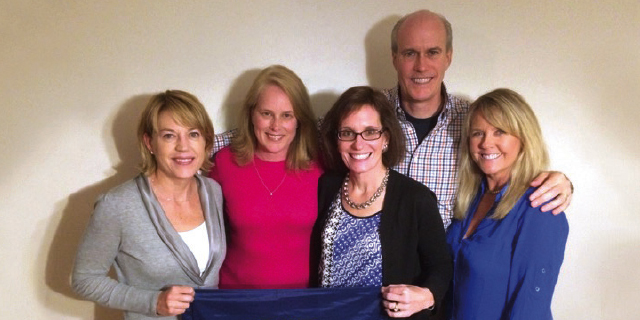 Five Ross MBA grads from the early ’90s recently got together in Detroit, including one from Australia. Pictured are Scottie Settle Knight, MBA ’92; Andrea Staines, MBA ’90; Allyson Farquhar-Boyle, MBA ’91; Joe Boyle, MBA ’91; and Donna VanAntwerp, MBA ’90. While the others live in the Detroit area, Andrea lives in Queensland, Australia, where she works as an independent company director around Australia.

Chad Albrecht, MBA ’97, and co-author Steve Marley, both sales compensation experts and principals at global sales and marketing firm ZS, have published a book, The Future of Sales Compensation. The book covers a variety of topics, including the debate over the importance of intrinsic versus extrinsic incentives; the move toward more personalized, technology-enabled incentive compensation models; and the potential of predictive analytics.

Kartik Gada, MBA ’01, has published an online book/white paper about new interconnections among technology, finance, and governance. He is planning a related campaign that will involve video contests and other research papers. Read more: atom.singularity2050.com

Nirav Mehta, MBA ’04, co-founded Thought Identification Inc., developer of a three-factor search engine algorithm that amplifies the electromagnetic field of a mobile device, enables photonic quantum interference to detect brain waves, and matches and correlates the brain activation pattern to an existing repository of such data to precisely and accurately identify thoughts. For a demonstration, contact him at nirav@thoughtidentification.com.

Jeevtronics, a startup co-founded by Aniruddha Atre, MBA '06, and Ashish Gawade, MBA ’05, won second prize at the Tata Social Enterprise Challenge in January, was runner-up at Sankalp Global Summit in April, and won first prize in the Lightning pitch competition at the International Knowledge Millennium Conference in November. Jeevtronics is an Indo-USA joint venture that designs and implements world-class yet affordable medical devices for underdeveloped and rural markets.

Wall Street veteran Shama Zehra, MBA ’07, has turned her entrepreneurial energy to the lifestyle social-travel world with the launch of the Jetzy app. Zehra co-founded Jetzy to connect and reward people who love to travel and live life to the fullest. The idea for the user-to-user social app is to allow people to “travel like a local” by discovering hidden gems and meeting people with similar interests. Zehra, who has worked for Goldman Sachs, Morgan Stanley, and her own boutique firm, says developing Jetzy combined her three biggest interests: “I love to travel, build businesses, and connect people,” she says. “This brings together all three.”

Eric Denys, MBA ’10, has been recently appointed vice president of supply chain at Wolverine Advanced Materials. Wolverine is based in Dearborn and is a leading developer of high-performance materials for brake noise and sealing applications. Prior to this, Eric was the vice president of Global Sales for the Wolverine Brake business.

Alex Mitchell, BBA ’11, of Washington, D.C., released Building Digital Products, a book for product managers in technology. Alex works for Vistaprint Digital, managing their website and domain name products. More information about the book can be found at www.buildingdigitalproducts.com. 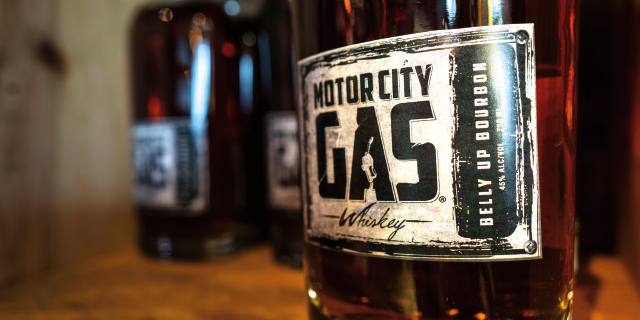 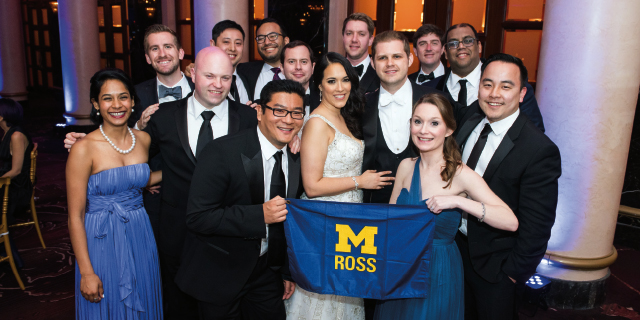 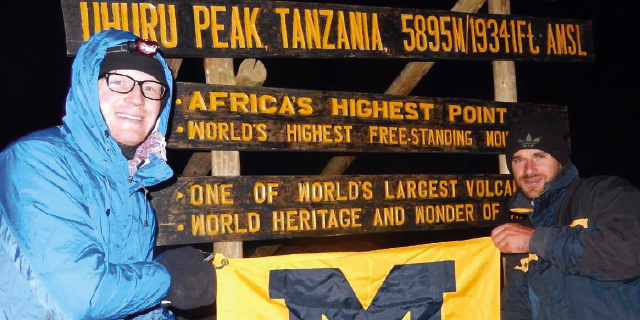 Jimmy Schneidewind, MBA ’15/MPP ’15, and Andrew Bracken, BBA ’08/MPP ’13, climbed Mt. Kilimanjaro in Tanzania, Africa's highest peak at 19,341 feet, in February 2016. Jimmy recently completed a fellowship with the 2Seeds Network in rural Tanzania working to increase productivity and profitability of poultry farmers, and he now works as a research assistant for the William Davidson Institute. Andrew works with Fintrac Inc. in Washington, DC, in international agriculture and food security.