First Person: Swimming with the Sharks 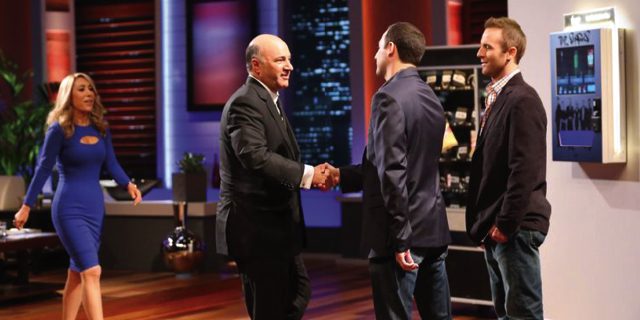 It was 2002, my sophomore year at Ross, and I finally had the freedom that comes from having access to a car.

I explored greater Ann Arbor and surrounding areas, and in no time I was totally hooked on Hiller’s grocery store. I took weekly trips to stock my fridge, and it struck me that there were tens of thousands of students in Ann Arbor without access to cars — yet there were no quality grocery stores on campus. I started Big House Delivery with a Ross classmate. The goal was simple: connect students with quality products they want.

Nearly 10 years later, the same concept struck again. I was riding home in a New York City taxi and I thought: There should be products here! Over the next few years, I went from a finance associate unhappy with my career to co-founding Vengo, raising $7 million, creating 14 jobs, and running my own company. I even appeared on “Shark Tank” and “won” big – scoring $2 million, the second-biggest deal anyone had seen on the show.

The idea of a taxi vending machine immediately hit a ton of resistance. As I searched for grant money to get started, I found out that NYC had its own business plan competition. Out of 270 companies, Vengo won the NYC Next Idea competition and received $17,500 of seed capital.

Despite having no product or team, this initial grant and momentum pushed me into the market. Talking with prospective brands that make physical products, I quickly learned how brick-and-mortar retail was declining, and yet how challenging it can be for physical-product brands to drive e-commerce orders. This real market and customer feedback drove our pivot from the initial taxi concept to Vengo, and we began setting up interactive retail and sampling experiences inside colleges, gyms, and hotels.

I sought out partners who were complementary to my financial skill set, and we completed our first prototype of a mini, high-tech, interactive vending machine. I leveraged relationships from my time in Ann Arbor and New York to put together a star-studded $1 million seed round, enabling our first key hires.

As valuable as my experience at Ross was, a large portion of my job you just can’t learn in a classroom. You have to get out of the building and into the market. You have to listen, learn, and you need a high level of self-awareness and emotional intelligence. You need to be highly competitive, aggressive, and hardworking. While at Ross, I wasn’t able to get Big House Delivery off the ground. Each grocery store that turned us down, however, helped me understand what it takes to understand your customer and launch a successful company.

Two fundamental academic concepts I learned at Ross helped drive Vengo to successful positioning in the market. First, analyzing the vending industry, we saw a large, slow-moving industry that is highly vertically segmented. We identified a clear opportunity for vertical integration. We wanted to create both the physical vending machine and the software to exclusively manage and control the hardware. We then went straight to the end consumer, schools and students, skipping the vending companies, to drive initial adoption. Once schools were hooked on Vengo, they pushed their innovation-resistant vending companies to start offering Vengo.

Second, Vengo applied the traditional lens of disruptive innovation (a term that is both overused and misused) to the vending industry. We discovered that vending machines were always evaluated based upon capacity. The machines had to be big to fit a ton of products in at the $1 price point. The big, 2.5-foot-deep machines were then placed in poor locations. Vengo came in and took this traditional metric of capacity and turned it on its head. We deliberately went smaller.

By changing the form factor of the machine, adding in technology to position the platform to marketers, and focusing on design, we significantly expanded the market where retail and point-of-purchase marketing can take place.

The best part? Vengo recently partnered with All Star Services, the largest vending machine company in Michigan, and I have been able to regularly stop in Ann Arbor on my business travel.