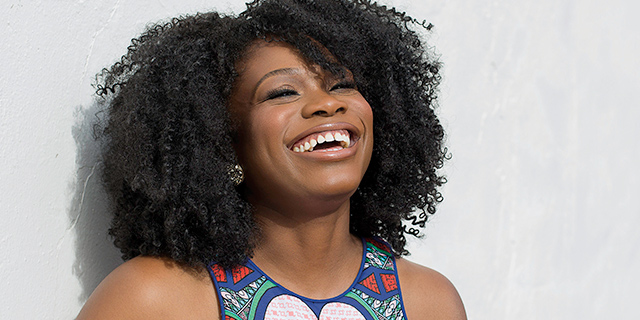 A year ago, Nicaila Matthews, MBA ’15, sat down in her living room with a computer, a microphone, and a desire to reshape our understanding of entrepreneurship.

You can hear her passion for the cause pretty clearly in the first episode of Side Hustle Pro, the podcast Matthews was recording that day.

“I’m starting Side Hustle Pro with a mic and a dream."

Matthews, who was born in Jamaica and grew up in the Bronx, started Side Hustle Pro to change that narrative for good.

Each episode features an in-depth conversation with a black female entrepreneur who has successfully turned what was once a side hustle (or part-time startup) into a full-time, profitable business. The entrepreneurs Matthews brings on to the show come from a diversity of backgrounds and started their businesses in a variety of industries. They offer listeners a combination of practical advice (like how to raise money from white male investors), encouragement, and inspiration.

That last one is often the most important.

“One of the key things I have learned from talking to all of these women is how much you have to believe in yourself," Mathews said.

“So much of life is centered around gaining validation and approval from others and you have to unlearn that mindset in order to succeed.”

Today, Matthews is more than 60 episodes closer to realizing her goal of reshaping the narrative and inspiring a new generation of African-American entrepreneurs. In the last year, Matthews has turned Side Hustle Pro into a hit, developing a loyal following and a thriving community of entrepreneurs.

In fact, since launching in the summer of 2016, the Side Hustle Pro podcast has been consistently ranked in the Top 100 most downloaded business podcasts in the Apple iTunes store, and the show was downloaded half a million times in its first year.

Explosive growth is not unheard of in the booming podcast industry, of course, where ad revenue for creators has grown by 85 percent since last year and, according to a recent study from Interactive Advertising Bureau and PwC, is on track to reach more than $220 million in 2017.

The growth rate and ad revenue potential makes going full-time an attractive proposition for Matthews, who still runs Side Hustle Pro as a side hustle–recording and marketing episodes when she gets home from her day job as senior manager of digital marketing at NPR.

“In my role there, with every new podcast or program released, I’m tasked with figuring out how to reach a new audience, how to spread brand awareness for these shows,” Matthews says. And at a time when NPR produces no less than 12 of the top 50 most listened to podcasts in America: “That’s come in handy for sure.”

Matthews said she is planning on making Side Hustle Pro her full-time gig when the time is right, but until then she’s finding happiness, strength, and fulfillment in building the community, changing perceptions, and encouraging her listeners to take the leap into entrepreneurship.

“It’s hard to put into words how amazing it feels to see this community grow.”

“To hear that people are finding such empowerment from it, it really makes me think of the word destiny and that everything happens for a reason and that I was meant to share these stories and inspire others.”

LISTEN TO A RECENT EPISODE:

William Davidson Institute at 25: Focused and Looking Forward
20 Questions with Catherine Bessant, BBA ’82
Scoring Goals — On The Ice and In Life
Ross Alum’s Popular Podcast Inspires a New Generation of African-American Entrepreneurs
Driving in The ‘D’ — Ross Alum elevates Mahindra’s Automotive Efforts in Detroit
First Person: A Journey Back to the Motherland

The New Rules of Entrepreneurship
Hard Facts About Soft Skills