2000s: The Art and Science of Serving Society 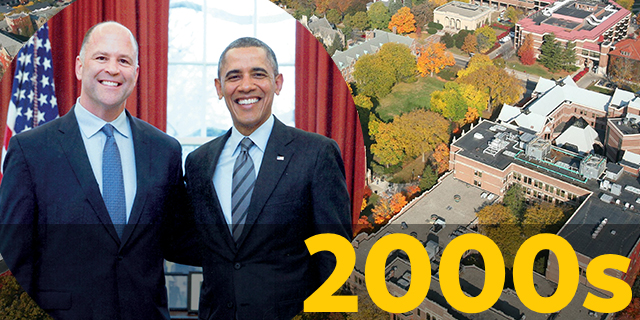 Jerry White, MBA ’05, already had a lifetime’s worth of accomplishments before he joined the Ross Executive MBA Program. He was the first non-Jewish graduate of Judaic studies at Brown University. He shared the 1997 Nobel Peace Prize for his role in the International Campaign to Ban Landmines and co-founded the Landmine Survivors Network.

Himself a landmine survivor (during a camping trip in Israel), White accompanied Princess Diana to Bosnia-Herzegovina to visit people injured by landmines, which helped bring international attention to the issue. He met with other world leaders on efforts to eradicate weapons that harm more civilians than soldiers.

But as he navigated the social impact and non-profit worlds, he found himself wishing for more skills in management, finance, negotiations and leadership.

So he jumped at the chance to do it at Ross.

“I didn’t know Michigan well, although I knew many people who graduated from there,” he says. “When the opportunity came to do the Executive MBA Program, even though I would fly out of Washington, DC, it seemed too good to be true. I was impressed with the hands-on approach, the applied learning, emphasis on strategy, as well as what I call elite modesty and talent.”

White continued his social mission after graduating (and speaking at commencement). One of his later accomplishments was leading a civil society campaign in Israel that led to a rare unanimous vote in the Knesset to clear hundreds of non-operational minefields. He later joined the U.S. Department of State to launch a new Bureau of Conflict and Stabilization Operations under Secretary Hillary Clinton.

He’s now flexing his entrepreneurial muscles as co-founder and CEO of Global Impact Strategies, a firm that offers advanced analytics software to help policy and business leaders make faster, better decisions. He also took to heart the Ross challenge to develop a ‘teachable point of view’ by becoming a Professor of Practice at the University of Virginia.

“I always thought I was more of an activist-artist, a combination of Forrest Gump and Mary Poppins,” he says. “That person where you go ‘Who is that guy in the picture with Princess Diana and Queen Noor?’ And the person who is kind of like a conflict resolution nanny. But I learned that if I can’t match that with science — like statistical modeling and game theory — then I’m not fully developed. It was at Ross I started to really appreciate that balancing act of matching art and science.”