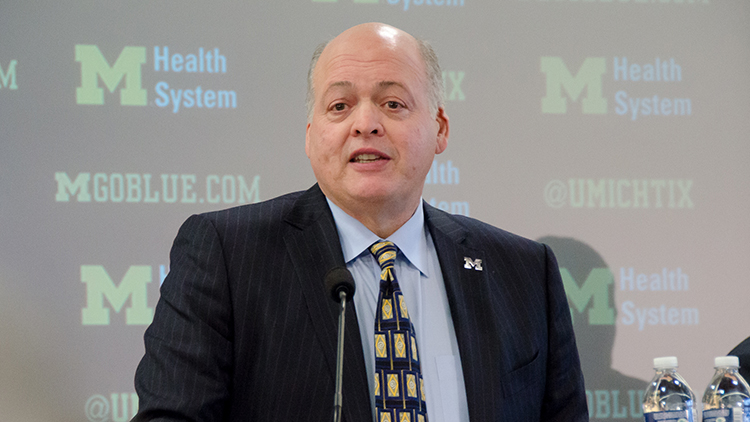 Hackett served on the board of Ford, and also headed up the company’s Smart Mobility effort. Rumors of management shakeup at the Dearborn, Michigan automaker have been swirling for weeks as the company’s share price has severely underperformed the broad market rally of the last few years.

Under Field’s tenure, Ford shares were down 37%.

Hackett spent 20 years as CEO of Michigan furniture maker Steelcase. That may not seem like great training to be CEO of a global auto company, but chairman Bill Ford singled out Hackett in a press conference on Monday as being a “visionary” and a “transformational leader.”

Hackett was tapped in October 2014 as interim director of athletics by President Mark Schlissel. Hackett’s most significant achievement was wooing former Wolverine quarterback and San Francisco 49ers head coach Jim Harbaugh to the University of Michigan to take over the football program. Hackett led the athletics department for 16 months while the search went on for a permanent replacement.

Besides graduating from the University, Hackett had also played center for the Wolverines. He is also a member of the board of advisors for U-M's Gerald R. Ford School of Public Policy and the Life Sciences Institute.

At Steelcase, Hackett is credited with taking a company that made furniture and reimagining it as a firm that transformed the workplace environment. "Jim has a unique capability to synthesize and bring everybody else along," Bill Ford said of his new CEO.

Hackett, at the press conference introducing him, said that Ford doesn't need to follow the Teslas, Apples, and Googles of the world into the new areas of self-driving cars, ride sharing and other new trends in mobility. Rather, it can go head-to-head with so-called “disruptors” and win.

Hackett said that Ford is very sound when it comes to developing the cars and trucks that people are buying today, but that the company needs to focus on the strategy that is going to win in the future as the market changes and people’s idea of mobility changes.

“The real opportunities in our business are in the future. We plan to be a competitor,” said the newly minted CEO.

University of Michigan’s Ross School of Business Partners With Gov. Snyder to Transform the Auto Industry