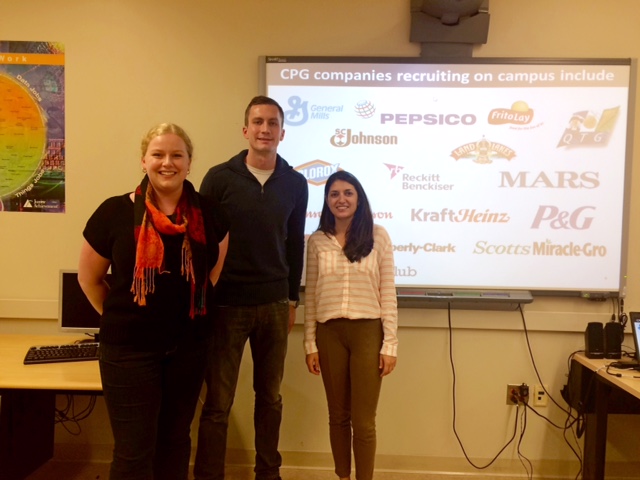 One of Michigan Ross’ most active clubs has created a new mentorship program in the Motor City. The Detroit Revitalization & Business Initiative (Detroit R&B) launched the program at Renaissance High School and Marquette Middle School, in an effort to build a partnership with Detroit Public Schools and encourage community and economic engagement.

The first session took place October at Renaissance. The second session was also held at Renaissance, where more than a dozen 10th- and 12th-grade students received an introduction to the world of marketing. Ross MBA students discussed the basic concepts of marketing, the importance of marketing brands, and the role of brand managers.

During this hour-long session, the mentees were also tasked with creating a name for their group and presented a 30-second ad pitch for their fictitious vehicle line. This program is just one of numerous efforts Detroit R&B has launched since its inception in 2010.

The club’s goal is to connect Ross students with the business landscape in Detroit and encourage them to work, live, and engage there. This goal is more important than ever as Detroit continues to build its economic base, including the construction of the new Red Wings arena, a new Nike store in the works, and new retail stores in the downtown area.

For Detroit R&B co-president Steve Worthy, MBA ’16, this program has brought his educational and personal experience full circle. Worthy is a Detroit native and graduate of Renaissance, one of the city’s top schools. The idea to start the mentoring program began after Ross professors Kim Cameron and Bob Quinn met with a group of DPS faculty and administration for a two-day workshop earlier this year and Dean Alison Davis-Blake suggested Worthy speak with the duo. Feeling inspired by the workshop, Worthy and other R&B members wanted a way to build a long-term, impactful relationship with Detroit. Starting that relationship with the next generation of leaders was a no-brainer.

“It feels good to connect with the kids and be seen as a mentor,” says Worthy. “I was in their seat less than 10 years before, so I’m a visual representation of some things they can accomplish.”

They plan to meet for six sessions at Renaissance and three at Marquette, focusing on different areas of business including marketing, entrepreneurship, and accounting/finance. For Ben Stickel, MBA ’16, also co-president of Detroit R&B, this mentoring program is his way of giving back to the city that helped him flourish professionally. Originally from Rochester, Mich., Stickel spent nearly five years living in Detroit, where he worked as an accountant. He sees the value of an organization such as R&B, where many members are not from the Detroit area, but still want to be active in the community.

“I’ve seen a lot of improvement in Detroit and lots of opportunities. Our organization gives Ross students a chance to interact with the city and the people who live here,” says Stickel.

“We hope to prep them to become independent thinkers, and this is an opportunity for Ross to give back,” says Johnson, who has worked at the college-prep high school for four years. “This is very valuable and enriching.”

Detroit R&B hopes to expand this program to other schools in the city. Even though they are both graduating in May, Stickel and Worthy anticipate other members will carry the torch and take the program to even greater heights next year. “We think that this is creating a more lasting relationship with Detroit and a way to truly interact with the people,” says Worthy. “It’s a win-win situation for everyone.”

To learn more about Detroit R&B, visit their website.