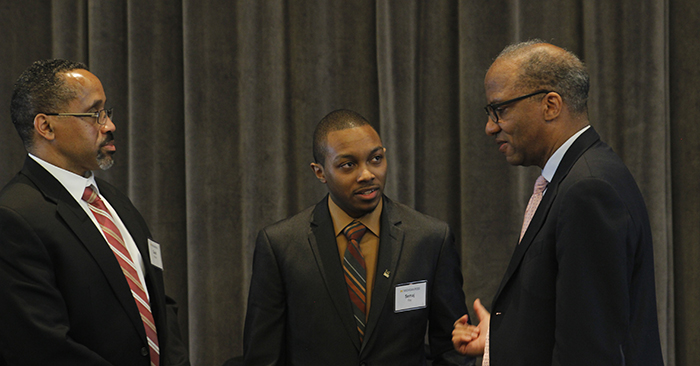 Wil Haygood told White House butler Eugene Allen’s story on the front page of the Washington Post, in a best-selling book, and on the big screen.

But it was a routine night covering a campaign event that got the ball rolling on the story of a working-class African-American man who witnessed years of history.

Haygood had covered a Barack Obama campaign event in South Carolina in 2008 when he saw three young women, all white, outside the event crying. He asked them why they were crying, and if there was anything he could do.

They said their fathers had kicked them out of their homes for supporting Obama.

“They believed what Dr. King believed, that we should judge a person not by the color of their skin but by the content of their character,” said Haygood, who delivered the McInally MLK Lecture at Ross. He wrote the New York Times bestseller The Butler: A Witness to History, and was associate producer of the film based on his book.

Haygood's talk focused on dream makers like Martin Luther King Jr., Allen, and Nelson Mandela, and why they matter in the course of history.

His conversation with the three women in South Carolina led Haygood to think Obama would win. So he later pitched a story idea to his editor — find an African-American who worked at the White House before desegregation, and tell their story with the backdrop of the first black president.

His editor gave him five days to find someone before getting back on the campaign trail. He finally hit paydirt when he found Eugene Allen, a former White House butler who worked with eight presidents — from Harry Truman to Ronald Reagan.

And he was there when President Lyndon B. Johnson signed the Civil Rights Act of 1964.

“Eugene Allen, who worked at 1600 Pennsylvania Ave., the most powerful address in the world, when he went back to his native Virginia couldn’t try on a suit in a store because of the color of his skin,” Haygood said.

Haygood asked Allen during his interview if anyone had ever written about his life and his unique perspective on American history.

“He put his hand on my shoulder and said, ‘Well, if you think I’m worthy, you’ll be the first,’” he said. “And that hurt me. Because this man sometimes loved his country more than his country’s laws loved him.”

But Allen and his family were in the audience when Obama was sworn in as president.

“The butler leaned over to me and said, ‘This is the first inauguration I’ve ever been invited to. When I was in the White House, you couldn’t even dream you could dream of a moment like this,’” Haygood said.

Obama’s election was the result of a long struggle and dreamers who believed in King’s principles. Said Haygood: “Those three girls, Nelson Mandela, a butler, and Dr. King. Who are we not to go forth and honor each of these people?”