India's Tata Group is composed of more than 100 independent companies in more than 100 countries. Jaguar Land Rover, Tata Motors, Tata Communications, Tata Global Beverages, Tata Steel, Tata Consultancy Services, and Indian Hotels are among the many group companies that brought in a total of $108 billion in revenue in 2014-15. And, amazingly, the group employs more than 611,700 people.

Developing talent in such a large-scale operation can be daunting, but Tata established a corporate management training center back in 1966 that has been successfully preparing high-potential and high-performing leaders to assume greater responsibilities ever since. Consistent with the organization's innovative and forward-thinking spirit, Tata Group HR proposed augmenting its existing portfolio of courses with a unique learning experience for senior leaders to be run in partnership with a top university.

In 2005, Tata approached the Ross School of Business to jointly create and deliver a customized executive education program, and the rest was history. Members from the Ross team including Business Development Manager Hari Athawale and faculty members including (late) Professor C.K. Prahalad and Professor Wayne Brockbank worked alongside Dr. Bowender, Mr. Satish Pradhan, and Mr. Bimal Rath from Tata and established a solid relationship that has continued to flourish for an entire decade. In fact, Ross Executive Education celebrated and delivered its 25th consecutive program for Tata in September 2015.

Scott DeRue, associate dean of Executive Education, commends this partnership and says, "Tata is a world-class organization that is committed to its employees, and we are proud to be its partner in leadership and people development."

Chief Executive Education Officer Melanie Weaver Barnett says, "The highly collaborative, long-term executive education partnerships we share with Tata and other organizations set Michigan Ross apart from other providers. We become true business partners, and we take great pride in the effective and enduring relationships we've established with companies around the world."

A Long History in India 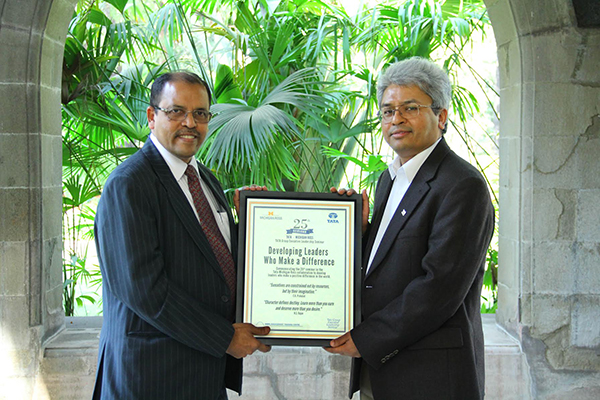 Ross has been offering open enrollment executive education programs in India since 1994, and Tata executives were a regular fixture in Ross' Global Program for Management Development before the company's custom program was established in 2004. After receiving positive feedback from its executives, Tata asked Ross to design a program to complement its own portfolio of leadership courses, and C.K. Prahalad and Wayne Brockbank worked closely with the organization to create the Tata Group Executive Leadership Seminar (TGELS).

Prahalad was instrumental in increasing Ross' engagement in India. A world-renowned business thinker, Prahalad developed revolutionary innovations in strategy and management which he called "next practices," and pioneered the Base of the Pyramid concept. Prahalad's sessions were cited as highlights of the TGELS program by early participants, underscoring his impact not just as a thinker and researcher, but also as a teacher and mentor.

To create TGELS, Ross worked with Tata to establish learning objectives and brainstormed ways to bridge the gap between where the company's leaders are and where they need to be in the future. Seminars take place in nine-day blocks in Pune, India, or on campus at Ross in Ann Arbor. When the program launched in 2004, it was held annually in Pune, but heavy demand brought on by an expanding Indian economy and the growth of Tata Group itself led to the addition of a second program each year by 2006.

As word spread, the program became so popular that a wait list was established, and in 2009 a third program was added. Currently, TGELS is offered twice yearly in Pune and annually in Ann Arbor. Each seminar hosts between 30 and 40 executives who have been nominated by their respective Tata companies.

The executives examine competitive strategies and how to win in the marketplace. Case studies, discussions, and action-based learning activities encourage the Tata execs to question assumptions and battle overconfidence. Executives deepen their understanding of their company's place within the larger group of Tata companies as well as in the broader business environment.

Professor M.S. Krishnan, who has been the faculty director for the program for more than ten years, teaches the program alongside M.P. Narayanan, Gautam Ahuja, Wayne Brockbank, Venkatram Ramaswamy, Rajeev Batra, and John Branch. Both Krishnan and Narayanan have long histories with Tata, having taught in every program since 2004.

Professor Narayanan says, "I have taught in the TGELS program since its inception and have enjoyed every facet of it. The class discussions are always animated and thoughtful, and the program brings in senior executives with a tremendous interest in what I teach — finance."

Tata Group's custom executive education program is the longest engagement in the history of both Tata Group and Michigan Ross.
- M.S. Krishnan

TGELS participants engage in an action-based learning project, the General Manager Agenda, which requires them to work in small groups to come up with project ideas on business opportunities in enhancing customer engagement, reaching new markets, and improving efficiency through process improvements for Tata companies. The teams apply what they've learned in class to strategize what changes they could implement to save time, reduce costs, improve the customer experience, or otherwise benefit Tata, and present their findings on the last day.

A number of GM Agenda projects have been successfully implemented in Tata companies. The mKRISHI Rural Service Delivery Platform is one example. Teams from Tata Consultancy, Tata Communication, Rallis India, and Tata Chemicals leveraged their respective strengths and collaborated to create a business model to provide rural farmers with hyperlocal data and insights on cultivation practices, pesticides usage, and weather.

Krishnan says, "Engaging in action-based learning activities with colleagues from other Tata companies strengthens internal networks and encourages creativity and collaboration across the broader organization. One TGELS team worked on a project for Titan, a leading manufacturer of watches, jewelry, and eyewear. They discovered that contextual design ideas are sometimes lost between the customer and managers. The team proposed a concept to leverage technology and capture customer insights in real time in their retail outlets using free-format idea gathering platforms on a tablet computer. This concept was piloted and later implemented for capturing customer insights.

"Another project brought Indian Hotels and Tata Communications together to offer videoconferencing services at the Taj Hotels to small and medium enterprises using the Cisco Telepresence technology on a pay-per-use basis in partnership with Cisco. Tata Business Excellence Model (TBEM) was reviewed by another team to include business innovation as a capability in addition to traditional quality, organizational process, and performance metrics."

"Since TGELS brings in executives from a very diverse set of businesses, it affords the faculty the opportunity to discuss a wide variety of issues. It also provides participants cross-learning opportunities to benefit from each other's expertise," Narayanan says. "It is gratifying to see projects initiated by teams composed of executives from different Tata companies."

The program's enduring success has been driven by a constant push for improvement from Ross faculty and staff. Ross and Tata meet frequently for critical reviews of the program to discuss what is working and identify areas for improvement. Faculty are deeply involved in the process and solicit feedback from participants to ensure the program continues to make a strong impact on individuals and their companies.

Tata Management Training Centre Director Emmanuel David recognizes the strategic nature of this program. He says, "Enduring partnerships built on shared ethos creates mutual value. This is an important partnership that is building leaders who will drive the Group’s future aspirations.”

The longevity of the program is unique to Ross and to Tata. Krishnan explains, "Tata Group's custom executive education program is the longest engagement in the history of both Tata Group and Michigan Ross. We are extremely proud of this partnership and are determined to continue to make TGELS a pivotal point in the progression of the Group's senior leaders."