We Crunched the Numbers: Michigan Ross Alumni Are Really Powerful 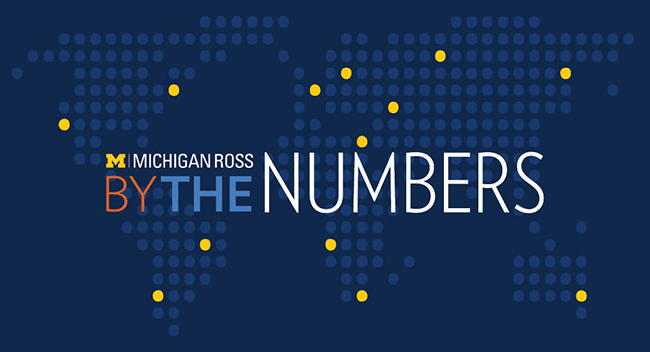 The end of another academic year is here at Michigan Ross, and with it comes an opportunity to look at the accomplishments, outcomes, and impressive impact of our community.

And when you look at the network of Ross Alumni across the globe, their accomplishments and power are definitely something to behold. Ross Alums sponsor MAP projects, host club events, start scholarships, hire Ross grads, meet with prospective students, and run some of the world’s most influential companies. Here’s how that power breaks down in numbers.

50 active Alumni Clubs
in cities across the world.

2 Ross Alums
listed as among the wealthiest people in America.

Yes, the Ross Alumni network is mighty on its own - but add to it the full power of the University of Michigan network, and it’s almost unstoppable.

#4
The U-M Alumni network was ranked among the most powerful alumni networks in the world by College Magazine.

That means anywhere in the world you go, anywhere you want to work, anytime you need the support of a network to launch a project, close a deal, or change the world, you’re not far from a Wolverine who’s more than happy to help you make it happen.