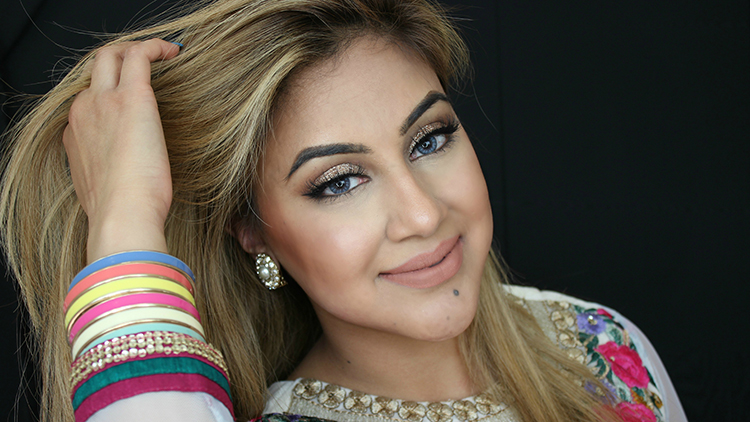 Shelly Sahi, MBA ‘16, is about to shock the $46 billion cosmetics industry with a revolutionary idea: medium-skinned women wear makeup too.

Although the makeup industry is booming, Sahi struggles to find make up for her Indian skin. And she knows she’s not alone among the rest of the medium-skinned population––the Hispanic, Arab and Indian women who have to cherry-pick among brands to find the best products for their complexions.

"If I have a really good bottle of foundation from one brand that works for me in the winter, the second I get tan, I can’t just easily move to the next shade –– it's probably too pink or orange,” Sahi says. "So I have go through and experiment all over again and find another brand that might have the next shade that I need. And it’s just a huge pain point.”

So Sahi came up with a business that not only addresses the problem, but encourages women to “Own Your Color.”

The brand, Sahi Cosmetics, knows that olive-skinned women not only need carefully crafted foundation colors for their skin tones, but other specially made makeup products as well.

"It’s time that some company comes up and says, ‘Medium isn’t just three colors in the middle of the line. Medium is actually ten colors!’” Sahi says. "And ‘medium' should translate to not just foundation shades but also other products –– lipsticks, eyeshadows, blush, contouring, eyebrow pencils –– that actually complement the complexion, someone’s own natural beauty, instead of trying to mask it."

Sahi Cosmetics aims to make shopping for makeup fun for her customers, and even more importantly, empowering. "I don’t want these women to feel uncomfortable in their own skin. I don’t want them to lose any confidence in who they are, to worry about praying in public, wearing their hijab. This is a very stressful time,” Sahi says.

"I know it’s just lipstick. But we want to make people feel confident and feel beautiful and own their color. And not be afraid to be who they are!”

Shelly Sahi does not waste time.

Just a little over a year ago, in December 2015, Sahi Cosmetics was merely an idea that Sahi tepidly floated to the Zell Lurie Center for Entrepreneurship. Since then, the line has launched a total of 20 products for sale on its website –– an amazingly fast achievement aided by a successful Kickstarter campaign, a grant from Zell Lurie, funding from the Desai Accelerator (which also provides a place for Sahi's office), and a first-place win at the Michigan Business Challenge, which awarded the company a total of $27,000 last week.

Does all that sound fast? There’s even more coming. In March, Sahi Cosmetics will be available on IpsyShopper, an app marketplace from the company Ipsy, a monthly makeup subscription service that’s valued at more than $500 million. Sahi is also launching a full foundation line in April, which is perfect timing for IMATS, the world’s largest makeup trade show in New York City, where the company will have a booth.

This is all especially impressive considering this CEO started her career as a scientist. She studied medicine during her undergraduate work at U-M, but after graduating realized she didn’t want to be a doctor. Her work in the biomedical lab setting landed her a role at Ford’s Innovation Center, where she wowed the company with her work on the aluminum bed of the Ford F-150. She transferred to the business office and worked as an analyst, where she also made waves –– her boss told her she’d make a great CEO one day –– and she regularly led meetings with Ford offices around the world.

In each of her career changes, she was looking for the one thing she’d be most passionate about. So she applied to Michigan Ross. “I was in all these marketing classes, learning about innovation and new product development,” she says. "I started thinking: Wow! This is really inspiring. I could do something like this."

The first thing she thought of was makeup: She has been studying Indian dance ever since she was a little girl, and she always did the makeup of her family and friends for special events. “I began to wonder if other girls across the country also have a difficult time finding makeup for their medium skin tones.” That’s when she took her idea to Zell Lurie, where Anne Perigo gave her the guidance and confidence she needed to get started.