A Michigan Ross Professor Liked His Students’ Final Project So Much, He Invested Immediately 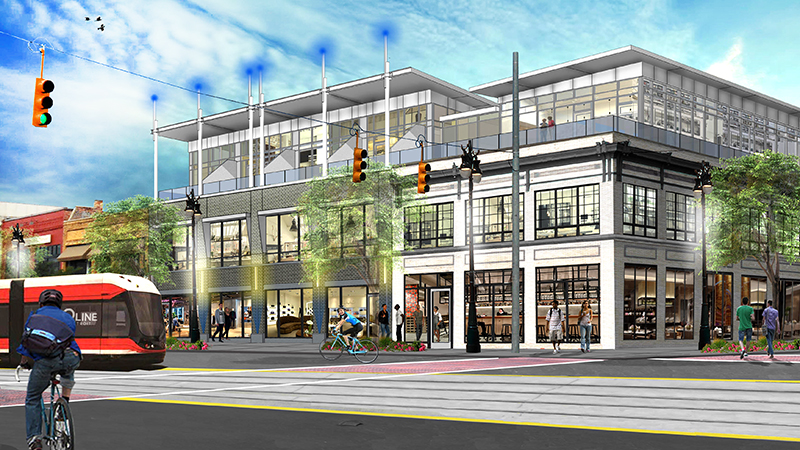 When it came time for their final projects, most of the students in the Real Estate Essentials course at Michigan Ross in 2013 thought big.

Tasked with creating their own potential real estate development deal, the student teams tended toward ambitious but infeasible and expensive mixed-use projects.

But Dang Duong, MBA/JD ’15, and his partners Myles Hamby, MUP ’14, and Clarke Lewis, MArch ’15, went smaller: A plan to redevelop a couple of modest, vacant, city-owned buildings in Detroit, a few blocks from the Fisher Building. The reason? They wanted something that worked, because they were determined to pursue the project in real life.

Now, everything they started planning a few years ago is taking shape. And their former professor — who gave the project an A+ in class — has joined them as a partner in the venture.

Called Baltimore Station, the project will transform two vacant commercial buildings into new retail, residential, and office space. The team expects to close on financing this month, with groundbreaking to follow shortly. A wood-fired barbecue restaurant has already signed a lease for part of the commercial space, and other tenants are in the works.

I want to treat this as more than an academic exercise. I want to do this as a real deal.

It all started in one of Peter Allen’s real estate classes at Michigan Ross a few years ago. In addition to teaching the basics of the field, Real Estate Essentials challenges students to form multidisciplinary teams and tackle a development deal as a final class project. Duong was studying business and law, while Hamby was pursuing a master’s in urban planning and Lewis in architecture.

Hamby — who had already committed to an urban lifestyle, buying a house in Detroit with his wife before starting grad school — recalls saying of the project, “I want to treat this as more than an academic exercise. I want to do this as a real deal.”

Duong and Lewis were thinking along the same lines. And Allen — who also owns the Ann Arbor-based real estate firm Peter Allen + Associates — loved the idea.

“The new kid on the block for cities is Detroit. It has replaced Chicago as the favorite city to go to, in my mind, especially if you’re in real estate,” Allen says, citing character, variety, and affordability as key attributes.

The student team approached Midtown Detroit Inc. President Susan Mosey, who suggested they consider a site at the corner of Woodward Avenue and Baltimore Avenue. Long vacant and owned by the city, the buildings sit right on the new QLine streetcar route and just a stone’s throw from the Detroit Amtrak station. Regular bus service and easy freeway access are other pluses.

“I loved that it was an area that hadn’t received investment. There is a lot of activity in that area right now, but at the time we were looking at it, there was not much,” Hamby says. “We saw its potential as a transit-oriented site.”

A DREAM AND A VISION

Mosey said they needed some real-world experience on their team. Allen and his son, Doug, were happy to provide it, becoming both operational and financial partners. “It’s the dream of my life” to see a student project take off like this, Allen says.

Finding additional financing was a challenge, Duong recalls. The team made close to 100 pitches. “They all loved the story,” he says. “But at the end of the day they never invested.”

Then they met Peter Cummings of The Platform. Having recently closed deals to buy the iconic Fisher and Albert Kahn buildings just blocks away, Cummings and partner Dietrich Knoer were the perfect people to complete the puzzle.

“We were in his backyard and he saw the potential of the deal,” Duong says. Cummings initially offered advice and guidance, and last May he agreed to invest in and oversee the project. Cummings hired Duong and Lewis to consult on the venture, and now they and Hamby are all full-time employees of The Platform, where they can work on their own project. They expect construction to begin soon and to take about nine months.

The vision is for a mixed-use project that will serve the immediate neighborhood. “That area is really the bridge between downtown and the neighborhoods,” Hamby says, and the team wants to make sure they are sensitive to the needs of the area.

A fast-casual barbecue restaurant called Woodpile BBQ Shack is the first tenant, and the team is in discussion for others. The team also envisions possible additional phases to the development. And they intend to stick around; Duong and Lewis also live in the city now.

“This is my passion. I’m in the exact place I want to be,” Duong says. “I’m committed to living in Detroit for the long run. The city is getting better and better every day. You can see it and you can feel it.”

Both Duong and Hamby express deep gratitude to their mentors, Allen and The Platform. But Allen sounds just as happy to be part of such a project, which shows how powerful a University of Michigan education can be, especially when different academic disciplines collaborate.

It also demonstrates the value of Michigan Ross hands-on approach to education, and Allen now encourages all his students to think in terms of real-world projects they might actively pursue. This year, he’s bringing developers into the classroom to benefit directly from the students’ work.

“I’m having the time of my life,” Allen says. “I’ve done development professionally, and now I want to continue what’s happening with these students. I love this subject, and Detroit has put it right under our noses. And Ann Arbor has been a great laboratory, too. You couldn’t pick two better cities.”