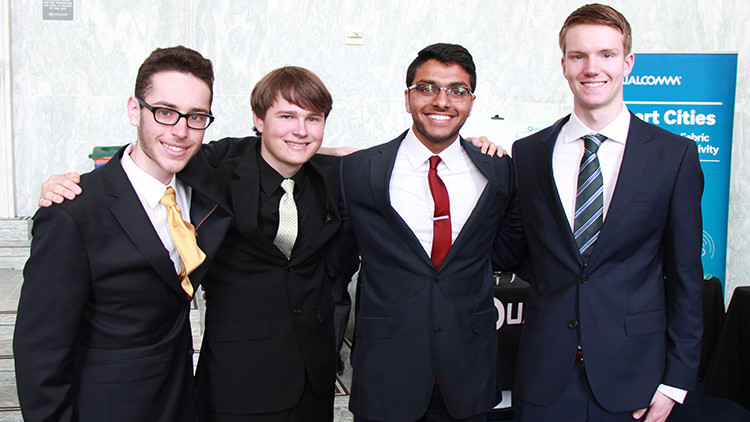 Hokin, along with co-founders Vishaal Mali from Northwestern and Andrew Brown from the Georgia Institute of Technology, recently took PedalCell to the Internet of Things Showcase hosted by the U.S. House of Representatives Subcommittee on Digital Commerce and Consumer Protection in Washington, D.C., this week. (Committee members include U.S. representatives Debbie Dingell from Michigan’s 12th District and Fred Upton from Michigan’s 6th District.)

The showcase featured “businesses from across the country that are using internet-connected devices to improve convenience, increase efficiency, and boost productivity,” and also featured a hearing on the opportunities and challenges presented by internet-connected smart devices. You can learn more and watch portions of the event from earlier this week on the committee’s website.

PedalCell, which Hokin and his team have been developing, takes the energy generated by a moving bike and turns that into a charging source for your phone. A generator is mounted above the front wheel, capturing the tire’s rotational energy.

The company promises that its device can charge any phone made in the past five years, thanks to a variety of connector options and an adjustable phone clamp mounted on the handlebars.

And you won’t have to speed like a hamster on a wheel just to bring your dead phone back to life. The device gives riders an uninterrupted charge no matter their speed, and can bring a phone from zero percent to 80 percent charged in 35 minutes.

The founders decided on a business-to-business focus after realizing how fast the bike share industry is growing: Bike shares doubled from 2011 to 2016, with 1.2 million rides now taking place in more than 1,000 cities across the world each year.

“We are the first company to create a high-power energy capture device for bike shares,” Hokin said. “However, our product's architecture is scalable, so a consumer product in the future is 100 percent possible.”

PedalCell has received support from a variety of sources, including the University of Michigan's 1000 Pitches, Ross' StartUM, the Zell Lurie Institute, the DECA International Career Development Conference, Northwestern's Garage Incubator, VentureCat Business Competition at Kellogg, and the Wildfire accelerator. PedalCell has received upwards of $20,000 from these competitions and recognitions.

“Most people may never get to see a reusable rocket, drive an electric car, or understand how solar panels work, but PedalCell can be seen, used, and understood by anyone,” Hokin said. “With the earth's environment changing rapidly around us, our society needs to change its attitude toward sustainable lifestyles. PedalCell aims to inspire a mindset where green energy can be convenient, powerful, and impactful in our everyday lives. Our slogan, ‘Power. By You.’ summarizes this ideology.”