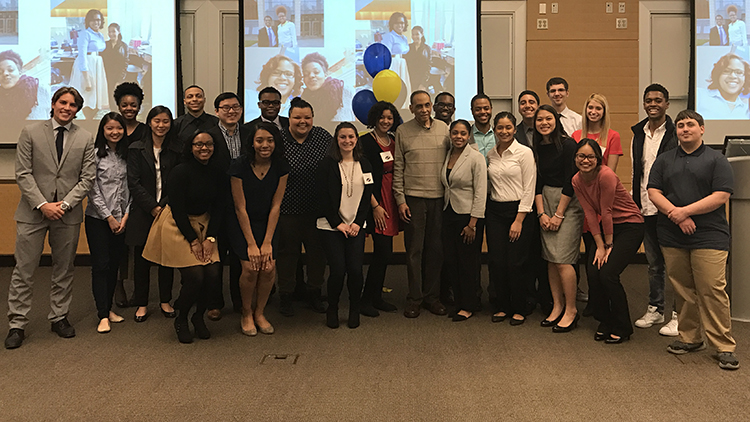 When Amber Blanks, BBA ‘16/MAcc ‘17, first entered Michigan Ross as a sophomore, she didn’t know much about business. Coming from a performing arts background, she wasn’t sure how well she could adjust to the hustle and bustle of business school. Then, she found out Michigan Ross had a program that could help her make a successful transition, and it proved to be life-changing.

“I started as a student in PI and they literally never got rid of me,” laughed Blanks. “I became a mentor my junior year, and then a seminar assistant my junior and senior year. My year as a graduate student, I was an administrative assistant.”

The program she’s referring to is Preparation Initiative (PI), founded by Ross Professor Frank Yates, who is also the program’s faculty director. It is one of four BBA outreach programs offered through Michigan Ross. PI, Michigan Ross School of Business Enriching Academics in Collaboration with High Schools (MREACH), the newly launched Ross Summer Connection (RSC), and Leadership Education and Development Summer Business Institute (LEAD SBI), are designed to prepare students for the Ross curriculum and culture.

They serve as pipelines for undergraduate students from, but not limited to, underrepresented backgrounds, including students of color, first-generation college students, students from lower socioeconomic backgrounds, and students from under-resourced schools, who have demonstrated the potential to become socially-conscious and innovative business leaders. Each program provides academic preparation, advising, and mentorship, as well as professional development including interview preparation, resume building, social media presence, and much more.

While PI and RSC are for U-M freshmen, MREACH and LEAD are tailored for high school students, to give them a glimpse into life at business school. The programs are inextricably linked to the business school, and many high school students develop such a strong connection with the campus, their mentors, and peers, that they end up attending U-M for college, like Priyanka Khetarpal, BBA ‘21.

Coming from a family who mainly works in the medical field, Khetarpal was always interested in business, but didn’t know anyone personally who could provide her guidance or information on career options. She began researching pipeline programs while in high school and found LEAD and MREACH. She participated in LEAD her junior year and MREACH as a senior. From those experiences, knew that Ross was the school for her.

“The environment that I came to know at Ross through MREACH and LEAD was supportive, positive, and collaborative,” said Khetarpal. “In my mind, I always pictured business as competitive and aggressive. Ross really taught me that good business is always personal and it's really important to make meaningful connections with the people around you. The adults here were so willing to give their time as mentors. It was a really great experience.”

As an incoming freshman, Khetarpal was part of the inaugural RSC program, which concluded in August. Combining classroom instruction and action-based learning, students had the opportunity to take prerequisite courses in economics, calculus, and writing; attend daily study tables; and explore the concept of personal identity through diversity, equity, and inclusion workshops.

Like Khetarpal, Oladele Gaba, BBA ‘21, was always interested in business, but didn’t know much about it. After he and his mom did a Google search, he applied for LEAD. He participated in both MREACH and RSC and agreed that the experience was worthwhile.

“I definitely feel prepared for Ross,” said Gaba. “I got to test out how things would work for me. I learned material prior to the semester starting and developed my time management skills. MREACH helped me become familiar with Ross, but RSC really prepared me for success here.”

PI participant and MREACH volunteer Kenny Johnson, BBA ‘18, said the programs were not only helpful in the classroom, but in life.

“Coming to Michigan from a background such as mine, there isn't really a fair advantage competing with other students from top high schools. I knew I wanted to apply to Ross and study business. Without the PI program, there really wasn't a shot for me to get into the business school.” In PI, he was able to take prerequisites in math and economics and as an MREACH volunteer, he had the opportunity to pay it forward, by mentoring other students.

He credits former PI director, James Logan, and Rhonda Todd, Director of Academic Success, for taking him under his wing. “He [Logan] really understood my story and my ambition. He put his neck out there for me. And Rhonda is an all-star. She runs these outreach programs and does an amazing job.”

Johnson believes that the programs are successful, in large part, because of the people leading them and their understanding that diversity goes beyond race and gender.

“They understand the importance of equity and equality within the ranks and the classes,” he said. “When I joined PI, it wasn't just majority African-American or Hispanic. We also had Asian students and a diversity of socio-economic class, thought, and perspectives.”

And with each academic year, the outreach programs continue to be successful in terms of recruitment, retainment, and career outcomes. With an interest in finance, Johnson was offered a position with The Blackstone Group in New York City, where he’ll begin after graduation next spring. As for Blanks, she will also embark on a new journey, working in Detroit for EY as an assurance associate later this month.

“I didn't come in saying, ‘I want to go into business, I want to get a MAcc degree, I want to work at EY’ until I went through the programs,” said Blanks. “The outreach programs helped me learn about different options, what is out there and what is available for me to do. So without that I would have applied blindly and wouldn't have had the support I received and needed.”