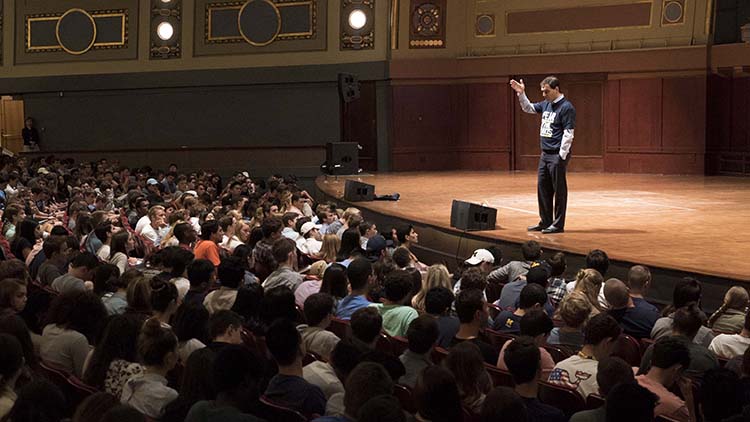 It’s more than a little scary to consider the future of work. Robots are getting smarter. Artificial Intelligence is gaining credibility all around us. Jobs that used to be essential are disappearing, thanks to outsourcing or computer algorithms.

As best-selling author Dan Pink told the audience at Hill Auditorium during the Joseph Handleman Lecture Series on Sept. 12, we need to adopt a new approach to and new understanding of job security.

Pink, whose books focus on business trends and insights and personal success, said not only do blue-collar jobs keep disappearing, but white-collar jobs in fields such as law and accounting are increasingly insecure as well, shaking up both industry and universities.

That’s because we’re moving from the knowledge economy, which focuses on data-collecting and problem-solving, to the Conceptual Age, “where the most important jobs are creators and empathizers, the people who create things that are hard to outsource, hard to automate, and hard to do,” Pink said. A new set of skills are needed to thrive, and what they are might surprise most people.

Pink, who grew up around Columbus, Ohio, compared the ethos of his generation, which he described as “when the Rust Belt was getting rusty,” to today’s changing work needs. When he was growing up in the 1970s, his parents knew that a college degree was a necessity. So, they encouraged him to pursue a specialty profession in order to do the white-collar work that would ensure a middle-class lifestyle.

But that ethos no longer sticks today, Pink said, thanks to three big forces that are rapidly changing today’s economy: the population boom of Asia, the increasing dependence on automation, and the abundance of products and competition.

“The standard of living in this country is extraordinary,” Pink said. “But that has changed the game significantly. Something gets created and it quickly becomes a commodity. So there’s this incessant need to do something better, do something new, to give people something they didn’t know they wanted.”

How, exactly, can one be trained to “give people something they didn’t know they wanted”? Pink has some suggestions — and they seem a little radical: Hone your empathy, artistry, and big-picture thinking.

Problem-solving can be done by any computer now, Pink explained. But with the abundance of information and data, figuring out which problems are priorities and demand resources is more important than ever.

Many of today’s biggest problems are due, in part, to a lack of empathy and mutual understanding, Pink told the audience. One of the biggest challenges facing the United States, and the world, is despair among large populations who are not sharing in basic prosperity. The imbalance, he says, is not economically sustainable.

Become an artist — or try

“When I was growing up, going to college, the arts were seen as ornamental — a side dish,” Pink said. “I think today they are fundamental. Your ability to succeed in this economy is equal to your capacity to succeed as an artist.” Why? Artists fundamentally understand how to compose and coordinate, and they also excel in having and conveying compassion.

Even if the arts aren’t a natural talent or interest of yours, Pink encourages you to at least explore them. Pink showed the audience two self-portraits, one drawn on the first day of a drawing class and a much-improved one created on the fifth day. “If an old guy like me can get out of his comfort zone, embrace the arts as fundamental within the space of a few days, all of you talented young people can do the same,” he said.