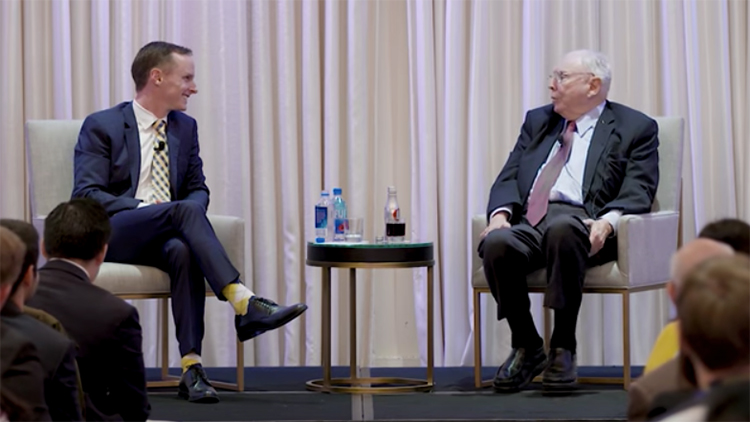 Charlie Munger is an American institution –– vice chair of Berkshire Hathaway, business partner to Warren Buffett, philanthropist, author, and former University of Michigan student. Recently, Scott DeRue, the Edward J. Frey Dean of the Stephen M. Ross School of Business, had the chance to sit down with Munger at an event in Los Angeles.

Watch the discussion on YouTube  |  Jump straight to the Bitcoin discussion

You can also listen to discussion on the Business Beyond Usual Podcast.

The two discussed Munger’s life, career, and global trends. The 94-year-old, with his characteristic straightforward wisdom, did not mince words on some of the biggest issues facing the country:

On bitcoin and cryptocurrency:

“I think it’s perfectly asinine to even pause to think about them. It’s one thing to think that gold has some marvelous value because man has no way of getting more gold or getting it very easily. So it has the advantage of rarity. Believe me: man is capable of somehow creating more bitcoin. They tell you they’re not going to do it. But that means they’re not going to do it unless they want to.”

On the political fights in Congress:

“Both sides that have violent hatred and contempt for the other side––they’re wrong. It’s a disagreement on policy that ought to be civilized. When I see Congress on my television set and the degree of hatred they have, utter contempt, really serious, way more than is usual––it’s evil to hate that much. It’s a mistake to hate that much. It’s always been true that when anger comes in, reason leaves.  Do you want to adopt a political party view of being angry all the time? If you do, welcome to the house of misery.”