After 1,500-Mile Run on Prosthetic Leg, Michigan Ross Alum Is Just Getting Started on Journey Toward Awareness 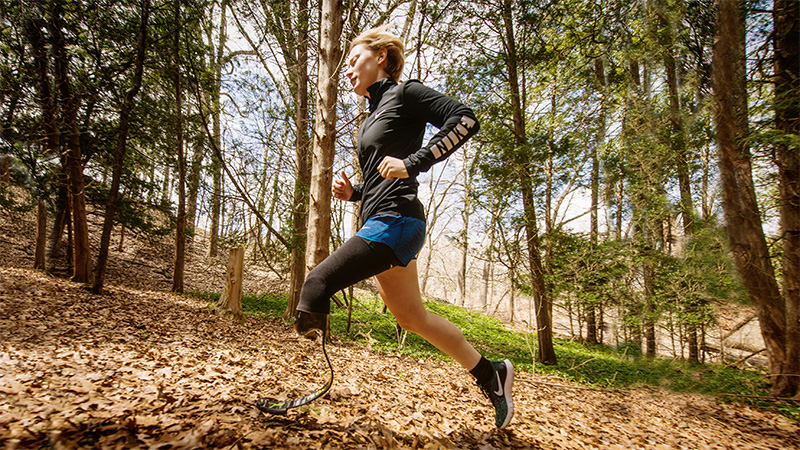 Last fall, Michigan Ross alum Nicole Ver Kuilen, BBA ’13, undertook an ambitious project: a 1,500-mile run along the West Coast, done on a prosthetic leg, to raise awareness of the insurance issues faced by those who use prosthetic limbs.

Her successful “Forrest Stump” journey now behind her, Ver Kuilen has continued to work for awareness on a number of fronts. She recently took the time to answer a few questions about her continuing efforts.

What was the biggest challenge you faced during the “Forrest Stump” trek down the West Coast?

As you can imagine, being on the road for two months and covering 1,500 miles of terrain would come with its fair share of challenges…and stories! My teammates included my mom, my partner and prosthetist Natalie, and my training buddy Kathleen; none of us had ever done anything this big. We encountered 100-degree weather while biking 100 miles each day, swam across the Columbia River Gorge while it was on fire, rushed Natalie to the ER after she crashed her bike going 25 mph downhill, and swam with the sharks under the Golden Gate Bridge.

The biggest challenge for me was not the pain, the fatigue, nor even the fear of attempting this massive endeavor. The biggest challenge for me was the exact reason we set out on this journey. That in my 16 years of being an amputee I am continuously running into the same obstacle: My prosthetic is only designed for walking and this is the only prosthesis insurance affords me.

On our 23rd day of the journey, my prosthetic foot finally broke down. It had only been nine months since I had gotten it, and it was supposed to last three years.

Is there any major take-away or lesson that you feel you learned as a result of the “Forrest Stump” effort?

That amputees in America today are still being denied access to even the most basic prosthetic technology to live!

During our trek, we stopped in Sacramento to meet a small business owner who had just had her leg amputated. A month after surgery, her private health insurance denied her access to a prosthesis, saying “she had a wheelchair” and “they didn’t cover prosthetics.” I was shocked. And I learned she wasn’t the only one.

Our country has taken a step back when it comes to health care for amputees. What you see in the media – running blades and bionic prosthetic technology – is not the norm. Very few people actually have access to advanced technology, let alone the most basic devices they need to return to daily living. This isn’t right. This is a story that needs to be told!

Do you think public awareness has improved as a result of your efforts?

Within my personal circles, most definitely. But we need to multiply this message. I want everyone in America to know this is an issue so we can effect widespread policy change!

Because of our patchwork health care system, “tiers of care” exist within the amputee community. Amputees covered under Veterans Affairs, No-Fault Auto Insurance, and Worker’s Compensation receive the best care and access to advanced prosthetic technology. If you know an amputee who has a running blade, multiple limbs, or bionic technology, they most likely fall under one of these categories, or received their device via philanthropy. Medicare and Medicaid then provide the next tier of care, which is typically one device, replaced every 3-5 years. And at the very bottom you have private health insurance, which is often flat-out denying access to a limb at all.

Whether you lost your limb in an auto accident, a workplace accident, or via bone cancer like me, should not dictate the quality of care you receive.

At the end of your journey, you were presented with a donated running blade. How is that working out?

Without the donation from the Challenged Athletes Foundation, Microsoft, Ossur, and Cornerstone Prosthetics & Orthotics, a running blade would have cost me $20,000 out of pocket; insurance does not cover activity-specific prosthetic devices. Since my amputation at 10 years old – and for the past 16 years – I have been an athlete, but never once have I had access to the appropriate prosthetic technology. My family didn’t have the money.

This blade has transformed my life – the way I look at myself, my ability as an athlete, my financial situation, and health. Having just one leg has been the limiting factor in my life. My one leg would constantly break down from my high-activity level, costing me thousands of dollars and hours at the clinic. It also caused debilitating back pain due to overcompensation because it was not designed for running. Now that I have the appropriate technology and two legs to share the load, I can finally just focus on living my life instead of constantly fighting to be mobile.

Watch my first steps on my running blade here.

What’s the status of the documentary about your efforts?

Thanks to the powerful Michigan alumni network, a fellow alumnus named Chris Duncan (BA ‘13) reached out to me just before my journey down the coast. Chris works for Snowday Studio in New York City and wanted to film a documentary about my journey to help me raise awareness. Chris and I threw together our savings to fund the production of the film, which is called “1500 Miles,” and we have a rough-cut put together.

Now, we need to raise $20,000 to finish post-production, which includes color grading, sound editing and mixing, and music composition. Once finished, we will submit to film festivals. It’s my vision to then take our film on a tour across the country to educate and inform our policymakers and healthcare providers on the injustices amputees face in our health care system today and advocate for policy change.

Watch our trailer and help our fundraising efforts here.

The “Forrest Stump” journey is finished now, but that’s only the start of your broader journey toward awareness and creating change. Briefly, what other specific efforts are you working on now?

Since quitting my job and taking on 1,500 miles down the coast, I have taken my story to D.C. twice to meet with members of Congress and spoken more than a dozen times to hundreds of people. I am now founding Forrest Stump as a 501c3 nonprofit advocacy organization to continue to raise awareness and advocate for change.

This summer, I will spend 10 weeks in Washington, D.C. as the inaugural health policy & advocacy fellow for the National Association for the Advancement of Orthotics and Prosthetics. Throughout the summer, I will meet with O&P clinics, think tanks, policy leaders, and attend congressional hearings pertinent to the amputee and disability community.

Additionally, in September, I am taking my message to the international scale to show that mobility is a fundamental human right to all, and to call on the U.S. to be a leader in policy change and health care reform that impacts amputee Americans and the entire disability community. I’ve teamed up with the Range of Motion Project and other elite amputee athletes to climb Cotopaxi, a 19,347 ft active volcano in Ecuador in September 2018. You can learn more and support my next athletic endeavor here.

I believe we are on the verge of a much larger movement. People of all kinds of disabilities, not just amputees, are systematically being denied the technology and care they need to achieve equal opportunities in our society. And we need to do something about this. My vision is that we can create the largest movement in American history for mobility rights.