These Married Ross MBAs Are Connecting Local Farmers With Consumers 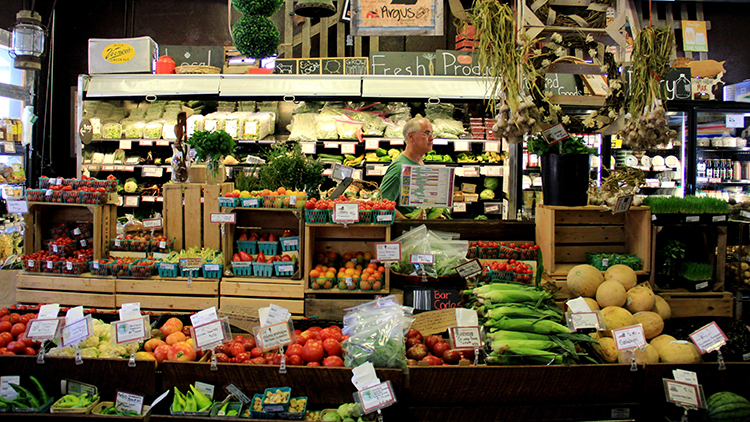 Anyone who doubts that small business can have a big impact might want to look at Argus Farm Stop.

Founded, owned, and operated by a couple who met while they were both students in the Michigan Ross MBA program, the business is essentially a year-round, everyday farmers market. Based in Ann Arbor, it sells produce and meat exclusively from local growers. As customers across the country become more interested in where their food comes from and how it’s produced, the concept has proven to be a hit — quickly exceeding sales goals and recently expanded to a second location.

“We started to discover that the local food system needed some help, that there were a lot of producers and small farmers that were in need of more sales, at prices that were sustainable for them,” co-owner Bill Brinkerhoff says. “And then there was also this tremendous interest from consumers to buy all these local food items, and they really wanted to buy them in a way that was authentic and direct from the farm.”

The impact of their work is substantial: They’re providing the area’s independent farmers with an important source of revenue; they’re giving customers a place to find fresh, locally grown food in all seasons; and they’re employing a growing number of people who are similarly dedicated to the cause.

After Brinkerhoff, MBA ’89, and Kathy Sample, MBA ’89, his wife and partner, earned their degrees, they initially worked for large companies on the East Coast. In 2001 they moved back to Ann Arbor, but remained in corporate roles. Then they started thinking about having a bigger impact on the local community.

Local food struck them as the right focus.

“The farmers markets are great, but they are (mostly) only one day a week and in Michigan, most of them don't go year-round,” Brinkerhoff says. “That was a big disconnect between fantastic producers and highly interested consumers.”

They did some research, asking farmers and other experts if a purely local, year-round produce market could work. The answers were encouraging, so they and one other business partner invested their own money in opening the first store, on Liberty Street at the western edge of downtown Ann Arbor.

“When we did our projections we thought it would take a couple years to grow to the volume that we achieved in the first month. As soon as the door opened on Liberty, it's been everyday nonstop interest,” Brinkerhoff says.

The Argus Farm Stop mission, written into its bylaws, is to grow the local food economy — and it has, providing more than $1 million in revenue each a year for local farmers. At the same time, shoppers can find fresh, local produce all year.

“When you find a mission that resonates, talented people come out of the woodwork,” Sample says. “So we have a lot part-time people. We have a lot of U of M students. We have a couple of high school students. We have people with a wide range of skills, from people who've worked on organic farms, to people who cook, to people who have farming families and just don't farm themselves right now. It's the mission that's the common goal.”

And the Argus operation loves to create personal connections between the customers and the suppliers.

“When the farmers come in here, they'll linger, and you'll have a customer in, and over time you learn which customers have brand loyalty to which farmers,” Sample says. “If Joan Ernst is in here and I see a customer who usually buys Joan Ernst's bacon, I'll make sure they meet each other. People are looking for that.”

The biggest impact, however, may be providing independent farmers with a regular revenue source that helps keep their work economically viable. Argus operates as a low-profit limited liability company, so most of the profit goes back to producers.

“What we wanted to do was to break the paradigm in a traditional store where you try to negotiate the supply price as low as possible so you keep pushing the price down to the farm and you raise the price as high as you can to the customer. We wanted to get rid of that entirely, so in this store, if you see something for sale, you know that as much as possible goes to the farmer, with Argus just breaking even,” Brinkerhoff says. That’s meant 75 to 80 percent of sales being paid out to the farms, compared to an average 15 percent in traditional stores.

The concept works so well that last year, Sample and Brinkerhoff opened a second location, in a building on Packard Street that had formerly housed Clague’s Market for several decades. They now have more than 40 staff members between the two locations.

Launching and managing a growing business means the couple draw heavily on their MBA education, more so than in their previous careers.

“I feel like we've used every part of our business training,” Brinkerhoff says. “We're doing our own accounting. We're doing our own marketing, personnel. Normally you leave business school and maybe you go into a functional area or you manage something in a bigger company and that's what we both had done. But this, you really have to pull out your basics.”