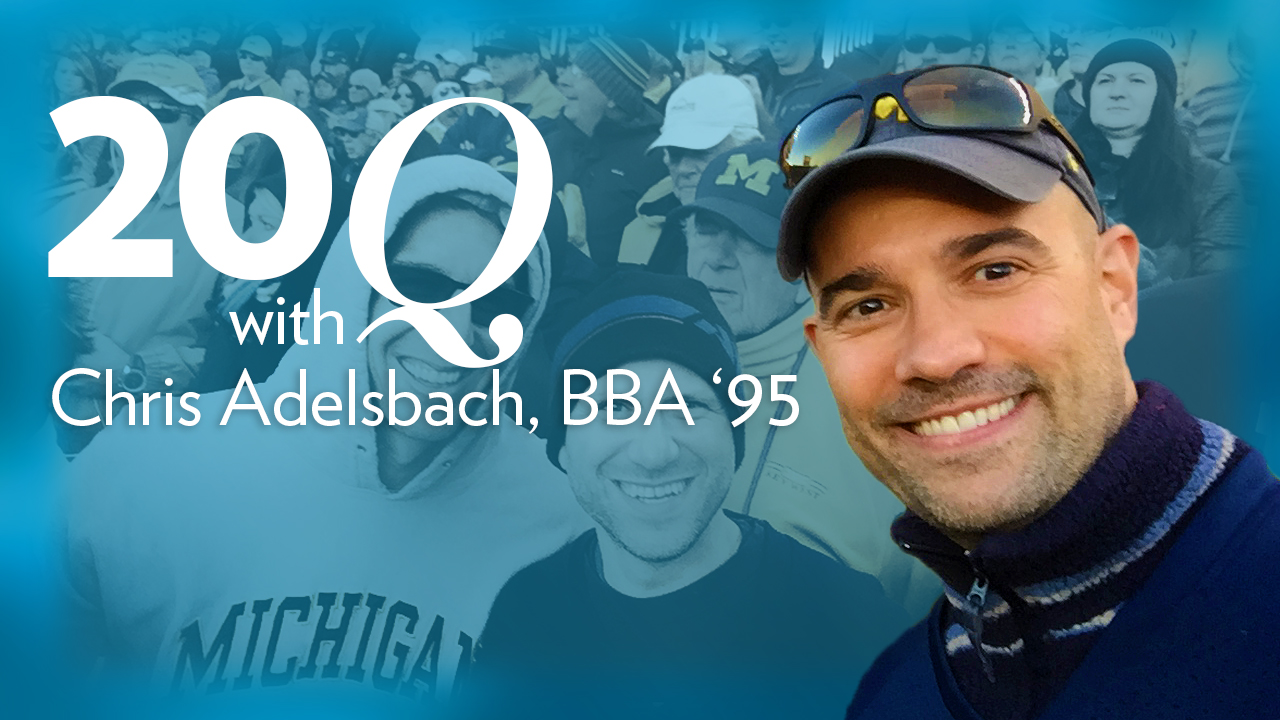 Chris Adelsbach, BBA ‘95, isn’t your typical angel investor. And that’s something he’d very much like to change.

“It’s my view that many angels aren’t mentors and that many don’t know what it means to be a good mentor,” Adelsbach said. “My ultimate goal is to help turn angels into value-add mentors to the companies they invest in.”

And, as Managing Director of Techstars London and recently named UK Angel Investor of the Year, he’s well positioned to help investors make the change. Providing mentorship and capital for entrepreneurs is something Adelsbach has been thinking about since 2006, when he left his job in corporate finance to start a financial services business he later sold to a NASDAQ-listed company.

“I had just sold my business in early 2014, and I wanted to mentor entrepreneurs and financially back their work,” he said, noting that his main interest lies in helping founders of FinTech companies, though his portfolio is varied.

“The more I met with incredible founders, the more I realised that investing in companies using technology like A.I. and blockchain would be part of the solution. I love that many FinTech founders stepped out of finance industry and are often solving problems that they personally encountered. They have domain expertise and ‘staying-power’ to execute on their plan.”

Adelsbach has backed more than 90 companies, with many notable successes, since he entered the venture capital space in 2014. He recently shared his first five principles to achieve better investor mentorship in part one of his Angel Manifesto, which he delivered at the Mayor of London’s TechInvest event in September. You can read more about that on the UK Business Angels Association website.

He’s well-versed in helping successful entrepreneurs and founders answer complicated questions about their own businesses — but how would Adelsbach get on with our "20 Questions?"

What is the best business decision you’ve ever made?

Not following the crowd. In late 2006 I left my role at GE Consumer Finance because I thought lending had reached its peak. My co-founders and I then went on to build what became one of the largest buyers and servicer of non-performing loans from UK banks during the financial crises. We sold the business to a NASDAQ-listed company in 2014.

What is the most thrilling or adventurous thing you’ve ever done?

Moving at age 23 to follow my (then) girlfriend (now) wife to the United Kingdom. I didn't know anyone apart from her and I moved to Leeds, West Yorkshire rather than the 'traditional' move to London. A two-year commitment abroad has turned into nearly 22 happy years in the UK. It goes to show that life is full of unexpected turns and serendipity. Some things just can't be planned.

I'd like to host my family in the UK for Christmas. We moved out of London to the 'country' this summer so we are aiming for a 2019 gathering!

What is your guilty pleasure?

Twizzlers licorice. My grandparents used to always buy this for me when I was young and it's not sold in the UK. Visitors to London bearing Twizzlers will be welcomed with open arms!

Who is your personal hero?

Easy. My parents. Before they were 30 years old they had fostered three children and adopted my brother and sister. At the age I am now, my dad and mom were both working full-time, studying to obtain their Bachelors degrees as mature students and full-time parents. They are hard-working, selfless people.

First album or CD you bought?

What was your first job?

I worked for a catering company at the Detroit Grand Prix. One of my jobs was to cut up 500 honeydew melons with a carving knife. I still have ten fingers. It was before health and safety was invented. After Ross my first job was at GE Aerospace. Safety around knives ensured I never had an incident with an aircraft engine!

I really liked and respected Professor Alan Foster.  When I had to choose my first job, it was between a consulting role in Chicago or a finance job in Cincinnati with GE. He said, "Chris, you're still learning. How can you be a management consultant? Go work at GE and continue your education".  Who knows where I'd be if I went to Chicago. But Cincinnati led me to the UK and I'm happy here so thank you Professor Foster!

If you could pick up a new skill in an instant, what would it be?

Windsurfing. But when I asked my wife what skill I should have she said, without hesitation, "bathroom tiling."

Lasagna. It makes me think of growing up with a big family. I think Wednesdays were lasagna/pasta nights.

Where is the most exotic or unexpected place you’ve seen a Michigan Block M?

My wife, children and I were on a desolate beach in Norfolk, UK. It was cold and raining. An older man walked by with a Block M hat. We traded a "Go Blue." I stopped to talk. He kept walking. Clearly a man on a mission.

Three people, living or dead, that you’d have over for dinner?

My grandfather, because I never met him, but recently saw his name etched into a tablet at Ellis Island. I want to hear his story.

My dad, because I have a suspicion that my grandfather never told enough stories to my father and sadly, died when my dad was relatively young, before he had a chance to do so.

My dad's brother, Tom — he recently passed away and had a great sense of humour. I'd love to see the three of them interact. Plus, none of us have special diets, so no fussy eaters.

Do you have a pet peeve?

People who look constantly look at their phones when they are in meetings. I find it remarkable to see couples do it in restaurants. Be present.

What are you afraid of?

Fake news, identity theft, cyber attacks, and unethical AI. Basically the sort of things you see in an episode of 'Black Mirror' or read about in 1984/Brave New World that is actually happening for real.

What job would you hate to have?

Dorm room cleaner at Ohio State University. Cleaning up after Buckeyes is probably my personal seventh circle of hell.

Who is today’s most influential business leader?

Larry Page (a fellow UM Class of '95 graduate — although I never met him). Google controls what we see and how we interpret the world. A huge responsibility.

Business or charity you wish more people knew about?

I've recently learned about a small UK charity called CASPA which helps children and adults with autism be the best that they can be. I'd like to see neuro-diversity to be included when people talk about building diverse teams. Click to learn more.

What do you miss most about Ann Arbor?

Game day Saturday in the autumn. My first ever game was UM v Notre Dame when Desmond Howard had "The Catch."  I've kept my season tickets ever since.

Do you collect anything?

I’ve invested in over 90 companies, so I suppose I collect start-ups!