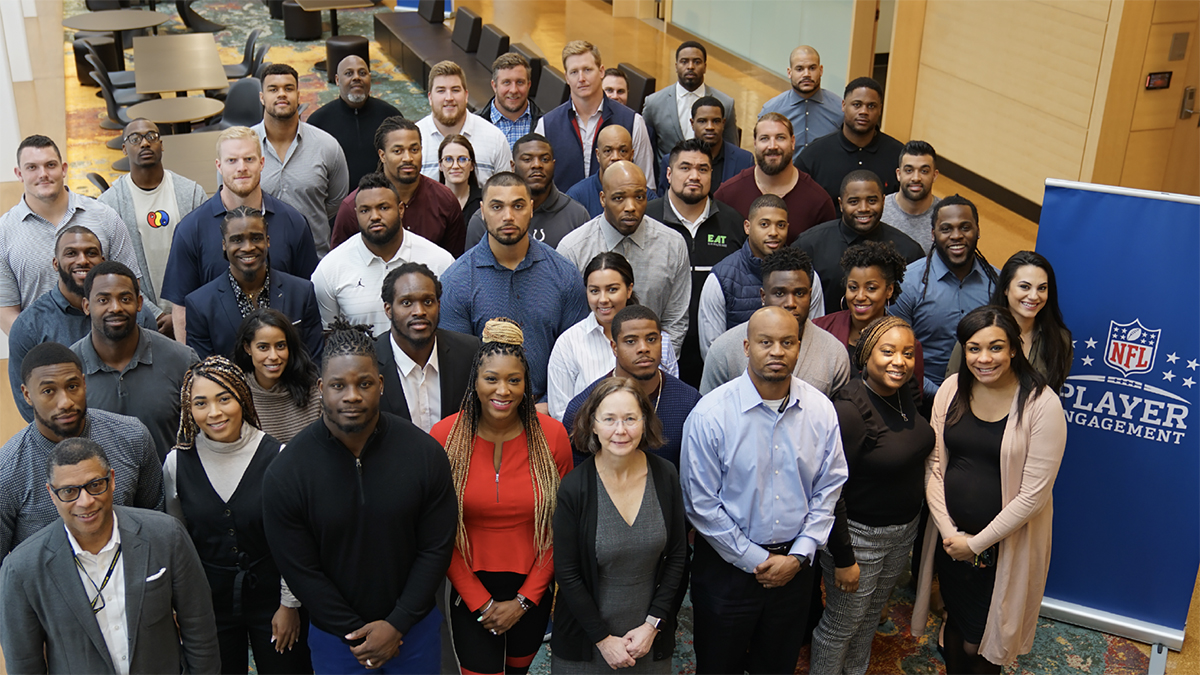 During the NFL Business Academy at Michigan Ross, players tackled the x’s and o’s of business to give them a leg-up on their careers outside of football.

With students off on spring break, Michigan Ross hosted around 30 current and former NFL players, including University of Michigan alumni Delano Hill, Maurice Hurst, and Christopher Wormley, for its fourth annual NFL Business Academy on Mar. 3-6.

The four-day business program encompassed a range of courses, discussions, and action-based learning experiences aimed at helping players improve their skills in business management and entrepreneurship, real estate, franchising, and philanthropic management. The sessions were led by Ross faculty, visiting business leaders, and NFL veterans who have successfully transitioned to corporate careers.

One of the highlights of this year’s program was a guest lecture by NFL legend and U-M Heisman Trophy winner Desmond Howard, who is now a college sports analyst at ESPN’s wildly popular College GameDay. Howard shared his personal story, including how he went from being a top athlete into the television industry (putting his U-M mass communications degree to good use) where he was surrounded by people with considerably more experience.

“I’d do reps (appearances) on the radio and on TV to prepare myself,” said Howard. “Television is an art and a skill and there’s a revolving door of talent, so the reps helped me transition once my football career was over.”

Howard also congratulated the players for attending the business academy and thinking ahead on what they wanted to do in the future. Using an example from the Jay-Z song “Coming of Age” that references someone turning down a thousand dollars to ride with the talented rapper for free, Howard said the players shouldn’t focus on their short game, but the long-term.

“We are proud to be involved in this program as it gives us the opportunity to speak with these players and provide them with business tools that will serve them well as they transition out of football and move on to future careers."

“Business is supposed to be difficult, but you’re conditioned to handle difficult,” he said, stating only eight percent of players make it to the NFL. “You need to take the lessons you’ve learned from this program and run with it, you’re already ahead of the game.”

Howard mentioned several other topics frequently discussed by business academy presenters that players were very familiar with, such as teamwork and research — essential skills for the game or a new business venture.

In addition, the NFL players participated in several mock business competitions, going head-to-head in a simulation activity running a cafe and Business Impact Competitive Investor Challenge. For the investor challenge, the players had to develop a product idea for a new business that they pitched to an investor panel on the program’s final day.

“We are proud to be involved in this program as it gives us the opportunity to speak with these players and provide them with business tools that will serve them well as they transition out of football and move on to future careers,” said Francine Lafontaine, senior associate dean for faculty and research at Ross and faculty director of the NFL Business Academy. “It’s also fun, and the players participating are always very engaged and a great group to work with.”

The NFL Business Academy was created by Michigan Ross Executive Education in partnership with NFL Player Engagement as part of the league’s commitment to players’ professional development and career transition process. Michigan Ross has been involved in teaching business concepts to NFL players since 2013.