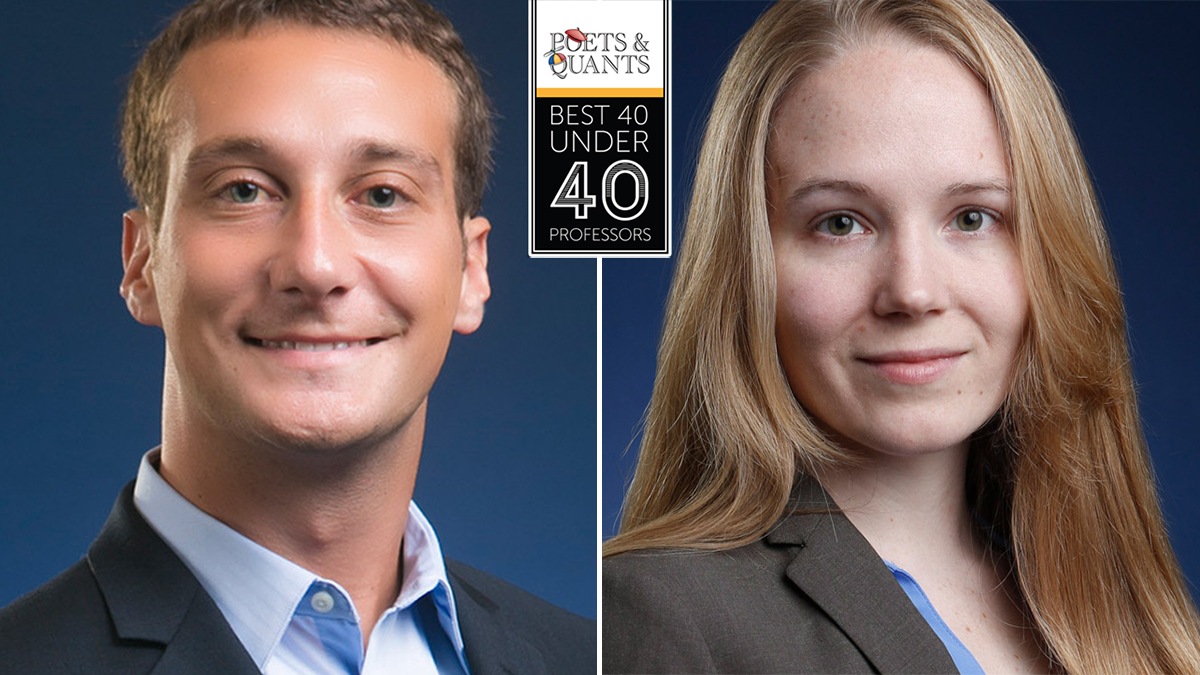 Sarah Miller, Eric Schwartz, and incoming management and organizations professor Lindred Greer have each been named to Poets&Quants’ annual list of the “Best 40 Under 40 Business School Professors.”

Now in its seventh year, Poets&Quants’ 40 Under 40 list identifies “the world’s best young business school professors in terms of research prowess, teaching chops, and impact they have on current students, former students, colleagues, business education research, and society and the world in general.”

The publication received a record-setting number of nominations this year and with Greer joining this fall, Ross is the only school to have more than two professors make the list.

Poets&Quants’ scores nominations based on a one-to-ten scale in two categories — teaching and research — with teaching given a 70% weight and research a 30% weight. Teaching is judged on the number and thoughtfulness of nominations, along with MBA teaching awards received, and research on the volume of published academic articles and Google Scholar citations for those articles.

In their nominations, Miller, Schwartz, and Greer were recognized for positively impacting students’ experience in the classroom and their research for significantly benefiting society at large.

Miller is the Sanford R. Robertson Assistant Professor of Business Administration and an assistant professor of business economics and public policy at Ross. Poets&Quants noted that Miller’s work has been cited nearly 1,000 times by fellow academics and highlighted several awards and grants she’s received for her research.

Among many great comments, one nominator said, “Sarah Miller embodies the concept of business as a driver of positive change. She makes economics real and relevant; in a survey, her students described her as ‘a joy whose enthusiasm for the material and for her students shines through in every class’ and ‘a wonderful and patient instructor who created a great classroom environment.’”

Miller said her favorite students are curious, she’d describe her grading as “stern but fair,” and if she’d have it her way, the business school of the future would have more women.

Schwartz is the Arnold M. and Linda T. Jacob Faculty Fellow and an assistant professor of marketing. Poets&Quants highlighted Schwartz’ previous prolific research into topics such as what drives word-of-mouth support from customers as well as his recent, and very important research into the Flint water crisis and U.S. District Court filings in lawsuits surrounding the contaminated water.

Using statistical machine learning and data optimization methods he developed for companies to use in typical customer settings for companies, Schwartz helped apply that technology in the public policy realm to identify which homes in Flint are most likely to have lead pipes. After drawing national media attention for his work, Schwartz is currently partnering with several entities - including students from across the University of Michigan in the B+I Impact Studio pilot course — to figure out how to scale up the efforts in Flint to maximize its impact elsewhere in the country.

When asked what he’d be doing if he wasn’t a business school professor, Schwartz said he’d be working in sports analytics, doing data science for a professional soccer/football team.

Michigan Ross has a lot to look forward to from Greer. Poets&Quants called her a “rockstar prof” for her nearly 5,000 Google Scholar citations, rave reviews from students, and for being among the most prominent faces at the school. At Stanford, Greer taught a very popular Psychology of Startup Teams elective, which she plans to launch at Ross next year.

As one student who took this course told Poets&Quants, “It has been the most unforgettable class for me. It’s been almost a year since I took the class, and I still put into practice what I learned, daily... Her research is not only innovative, but it’s also extremely useful.”

Why does Greer believe she stands out as a professor? “I care. I care deeply about helping my students acquire the tools they need to achieve their dreams and be leaders who can make a positive difference in the world,” she said. She’ll fit right in.