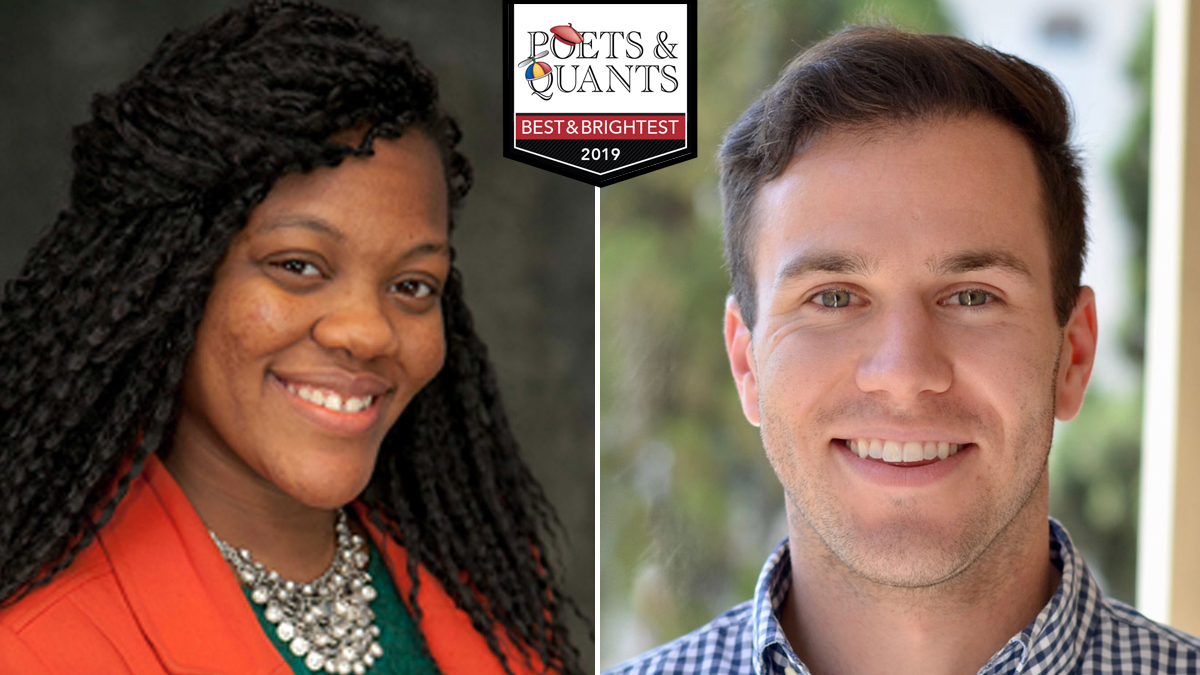 Kashay Sanders and Nathan Stevens were both named to Poets&Quants’ list of the Best & Brightest MBAs from the Class of 2019, described as “a group of highly decorated professionals who beat the odds and get things done.”

To compile this year’s Best & Brightest list, Poets&Quants sent invitations to 71 MBA programs around the globe seeking nominations for “trailblazers” and “the most indispensable MBAs in the class.” Poets&Quants evaluated the nominees in three categories — extracurricular activities, academic and professional achievements, and the insightfulness of the responses — to determine the 100 graduates who made the list.

According to Poets&Quants, “In the Class of 2019, you’ll find the can-do candidates, the ones who are unafraid to take risks and embrace discomfort as they pursue their purpose and make their world better.”

That’s certainly emblematic of the Rossers on the list. Both Sanders and Stevens have devoted much of their time at Ross (and prior) toward impact-oriented activities across the University of Michigan, as well as nationally and internationally.

Coming to Ross from the nonprofit sector, Sanders took on a variety of leadership positions at the school and in the community while pursuing her MBA aimed at making a positive difference.

“Kashay embodies the Ross way by empowering others to take the reins and be a change agent,” said Soojin Kwon, managing director of Full-time MBA Admissions and Program at Ross.

“She has the unique ability to intently observe, listen, reflect, and engage others in solution-finding. She has been a motivator of her classmates and a thoughtful collaborator with the MBA Program Office in creating the best student experience possible.”

After graduation, Sanders will be working at Microsoft in the company’s HR Trax program.

After living in the Middle East, where he led programming providing assistance to hundreds of thousands of Syrian refugees, Stevens chose to pursue his MBA at Michigan Ross because of the school’s strong focus on social impact and resources available for experiential learning.

While an MBA student, Stevens was director of investment of U-M’s Social Venture Fund, leading 40 of his fellow students through the entire impact investment process from sourcing deals to executing investments.

As Gautam Kaul, professor of finance, said, “Impact has become the new way to differentiate yourself, but Nathan’s walk more than matches his talk.”

In recognition of his social impact efforts, Stevens received the Skip and Carrie Gordon Scholarship Award for having “demonstrated an outstanding commitment towards pursuing avenues to solve complex social challenges.”

Stevens will be working as an associate in McKinsey & Co.’s Middle East Office after graduation.