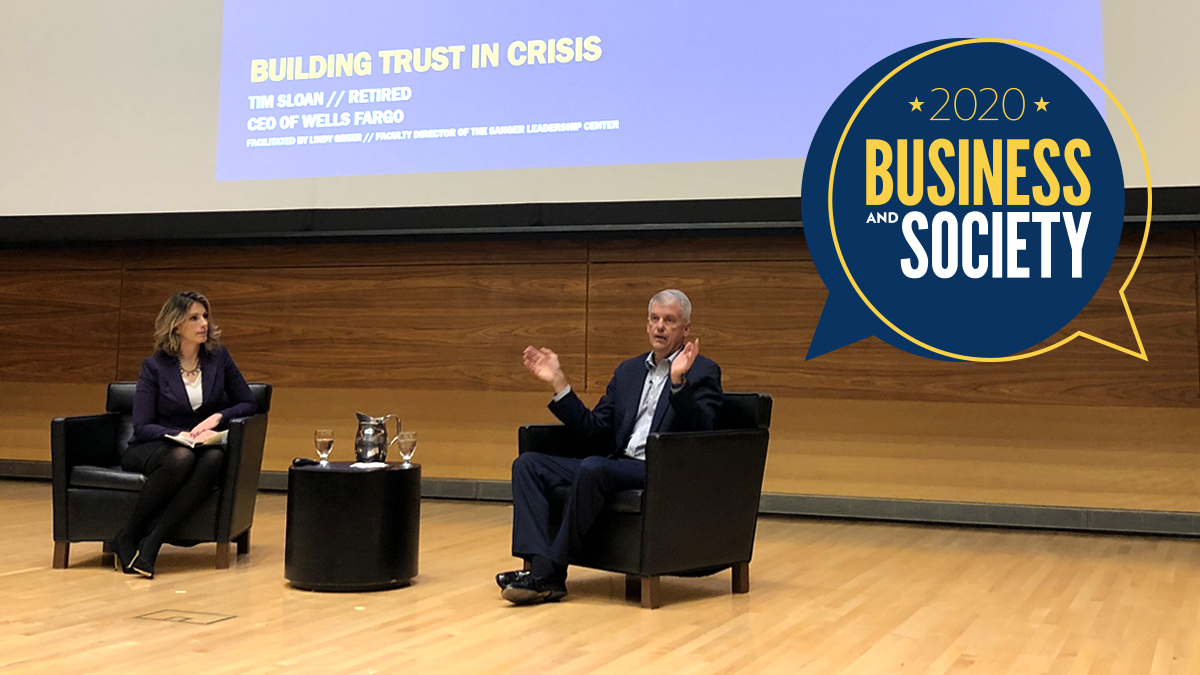 Recently retired Wells Fargo CEO Tim Sloan, MBA ’84/BA '82, discussed how companies can build trust with internal and external stakeholders during an intimate conversation at the Ross School of Business.

The conversation with Sloan was moderated by Lindy Greer, professor of management and organizations and faculty director of the Sanger Leadership Center at Michigan Ross. It was the second installment of the business school’s new Business & Society 2020 event series. Featuring talks by expert faculty and industry leaders as well as professional development workshops, the series explores how business can address the most important economic, social, and political challenges of our generation.

Sloan, who retired from Wells Fargo after 30 years earlier this year, became CEO in September 2016, when the highly respected bank was experiencing one of the greatest crises in its long history and transitioning from a decentralized to a centralized bank.

“When I stepped into the role of CEO, my first job was to re-recruit a quarter of a million people because for that group of folks the Wells Fargo they worked with fundamentally changed when we signed those consent agreements,” he said. “We received an incredible amount — some fair and some not fair — of criticism from everyone. Their view of the company had changed.”

Sloan said the first thing he told his leadership team to do was to start listening to the employees in an entirely different way. As the new CEO, he had to take responsibility for the mistakes Wells Fargo had made. “For whatever reason, they didn’t believe they had heard this before,” he said.

Wells Fargo organized regular town halls of 500-2,000 people, broadcast to the entire company, where Sloan answered unscripted questions for an hour. They also began issuing surveys to employees and asking people who had issues to email him personally.

“People didn’t believe I would answer those emails, but once they saw that model of leadership, their thoughts changed,” explained Sloan. As the feedback came in, he said, they started making changes, including becoming the first financial institution to offer a $15 minimum wage and expanding benefits.

“I knew we couldn’t be successful as a company without first winning the hearts and minds of our internal stakeholders,” Sloan said. After that, attention turned to listening to and communicating with Wells Fargo customers and other external stakeholders about what the company was doing.

“We found the key is to sit down with each stakeholder and ask what they think of the company because that feedback — open communication — is incredibly important,” he explained. “But we realized that no matter what we did, people have different perspectives and you’re not going to satisfy everyone.”

Sloan said businesses today need to operate like they are experiencing a crisis every day due to the rapid change in business models, policies, customers’ preferences, and the media.

He also said leaders need to be willing to assemble diverse groups, make decisions quickly, and move on, and that leaders shouldn’t be afraid to make changes to the way things have been done before.

The next event in the Business & Society 2020 series will be a panel discussion moderated by Francine Lafontaine, senior associate dean for faculty and research at Ross, called “The Purpose of Business: Shareholders and Stakeholders” in December; followed by a dialogue moderated by David Wooten, professor of marketing at Ross, called “Creating Change: A Leadership Diversity” on Feb. 14, 2020.