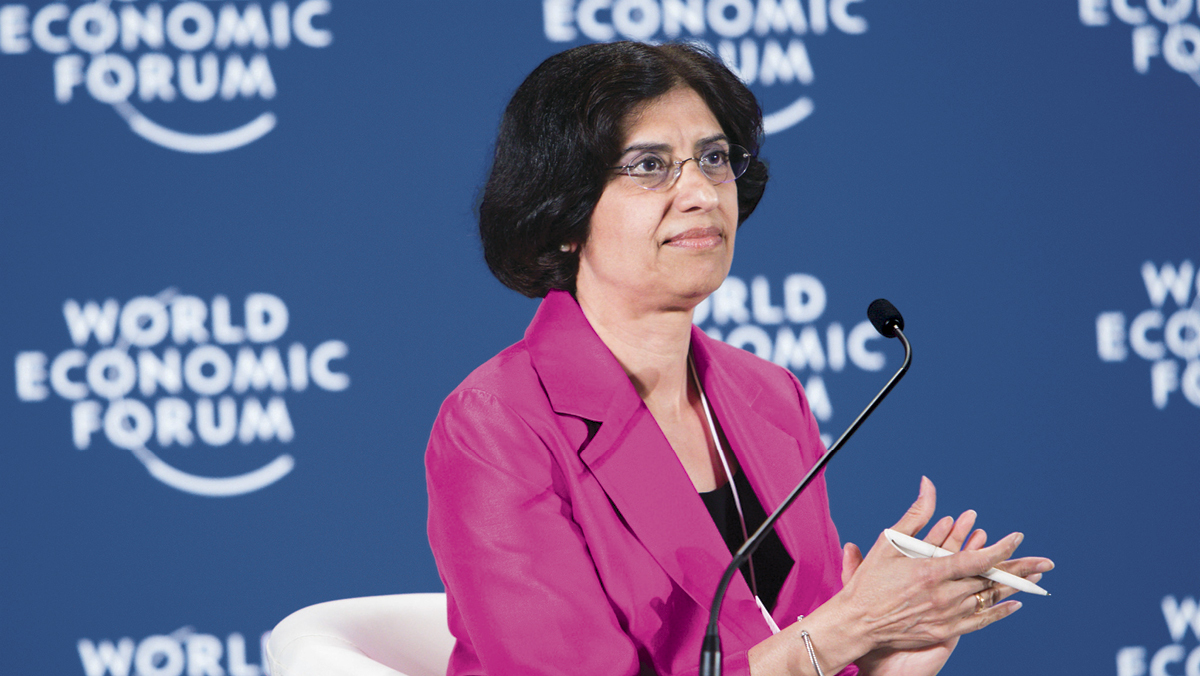 There’s no one more central to the discussion on how technological advancements — and concerns about control of information — are affecting our world than Sarita Nayyar, MBA ’87.

Nayyar is a member of the managing board, managing director, and chief operating officer, USA, of the World Economic Forum, which is an international organization for public-private cooperation. She led the international expansion of WEF’s Centre for the Fourth Industrial Revolution, a collaboration hub that brings together regulators, legislators, and executives to develop policy frameworks that can help address the worldwide challenges related to emerging technologies.

“We want to make sure that government mechanisms for the regulation of these technologies will maximize benefits and minimize risks, while actually helping all individuals,” she said.

One of the mechanisms Nayyar and her colleagues helped design is Rwanda’s pioneering framework of performance-based regulations for drones, allowing drones to deliver goods and services nationwide. The regulations are the first of their kind in the world and have created a system that enables companies to deliver medical supplies, the government to monitor endangered animals, and farmers to make agriculture yields more efficient.

“After being implemented, principles of that policy have been shared across Africa and Asia,” Nayyar said. “There is now a Drone Innovators Network created by the center connecting drone manufacturers with government officials and civil aviation authorities to help them work together to create these kinds of policies where they are needed.”

The center has also recently released a drone operations toolkit that will help accelerate and scale its learnings internationally. But drones are just one of six areas of focus for Nayyar and the center. They’re also developing collaborative protocols and policy frameworks for artificial intelligence and machine learning, the internet of things, blockchain, autonomous vehicles, and data policy.

That last one, data policy, proves the most complex.

“As a society, we are generating huge amounts of data that have enormous value,” Nayyar said. “If all the data can be made available so that everyone could safely access it while protecting individual privacy, we could probably see much greater and much faster progress.”

“But countries are looking at data like a national currency now and want to control it and monetize it. It makes these negotiations and discussions about regulation incredibly important, and very challenging.”