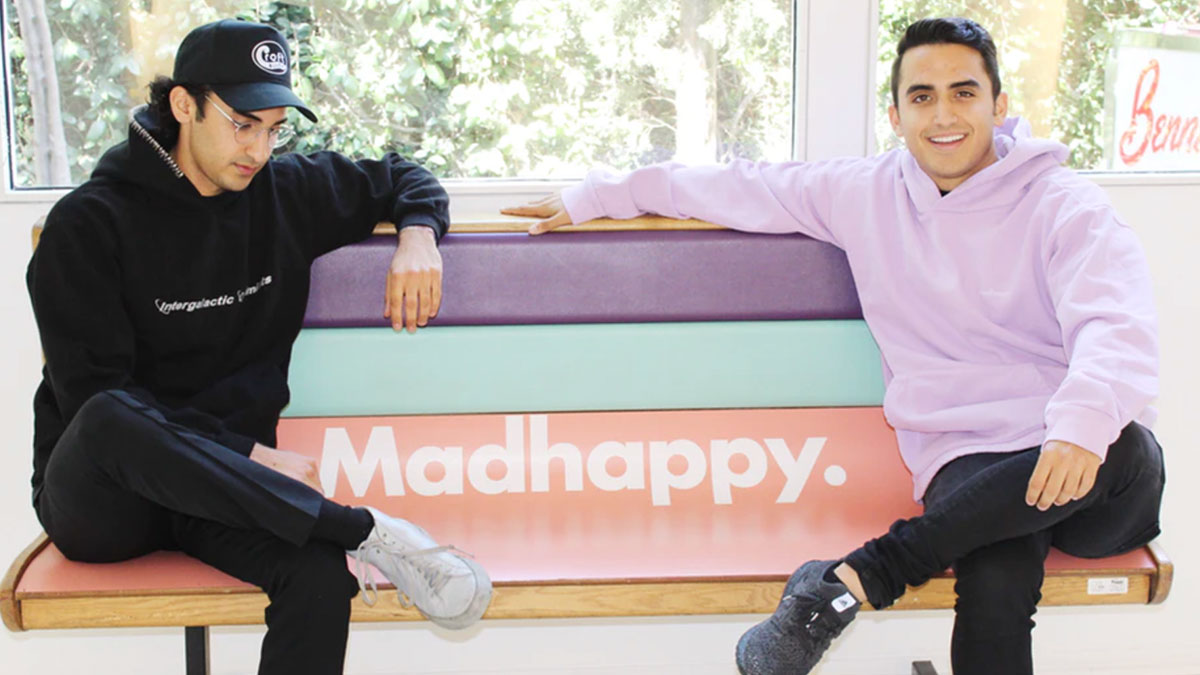 Peiman Raf, BBA ‘16, is co-founder of Madhappy, a lifestyle and streetwear brand that aims to spread positivity and inclusivity, which has been featured in Forbes and Vogue, and garnered the attention of LVMH luxury goods conglomerate.

Driven by their mental health mission, Madhappy creates products and experiences to uplift people, and offers “an optimistic approach to the Millennial generation”, as described by Forbes.

Raf’s role at Madhappy evolved from an experience that reflects the company’s optimistic outlook. After graduating from Michigan Ross in 2016, he worked in investment banking in New York. After some time, Raf started to feel burnt out, so he returned home to Los Angeles where he reunited with his brother and co-founder, Noah Raf, and decided to stay in California to think about his next steps.

“I’m a high-achiever, so it’s hard when you feel like you’re losing control of things,” Raf said. “But I ended up starting this [Madhappy], so I got pretty lucky.”

In April 2017, Raf, his brother, and their two other business partners founded Madhappy. The company did not have much financial backing or trendy marketing, but Raf and his business partners had a name and brand concept that they loved and thought would be relatable.

Originally, Madhappy launched solely online where they sold out dozens of apparel releases, and were worn by the likes of Cardi B and Gigi Hadid. Soon after, they began exploring pop-up shops to better connect with customers and allow them to shop designs in person. This gave Raf and his co-founders an opportunity to place social good at the forefront of their brand by building an inclusive community and safe space at events.

“We started our programming and saw how much this conversation was needed in the age demographic that is our core consumer,” said Raf. “We’re giving them a voice in a new and creative way.”

Last fall, Madhappy caught the attention of LVMH, one of the largest luxury goods conglomerates in the world, who invested in their first round, helping them to expand their product line in the U.S. and to Europe and Asia.

On the content side, Madhappy is continuing work on their online and social pop-ups, and The Local Optimist publication, which includes more conversations surrounding mental health, toolkits, and encouraging stories.

Raf’s specific role in the company includes business operations, accounting, fulfillment, and human resources. He also works on business development, marketing, and public relations. Raf said that while nothing can directly teach you how to start a company, that Michigan Ross gave him the business and strategy fundamentals that are still “super helpful” in his daily work, and important connections from the school’s large alumni network.

When asked what words of advice he had for current students or recent graduates, Raf shared that it is important to be patient and try many things of interest while young with less risk.

“Life is hard to predict, but just try to be optimistic in every situation,” said Raf. “Even like with the virus that we’re dealing with now, it’s the approach that you take that makes a difference.”