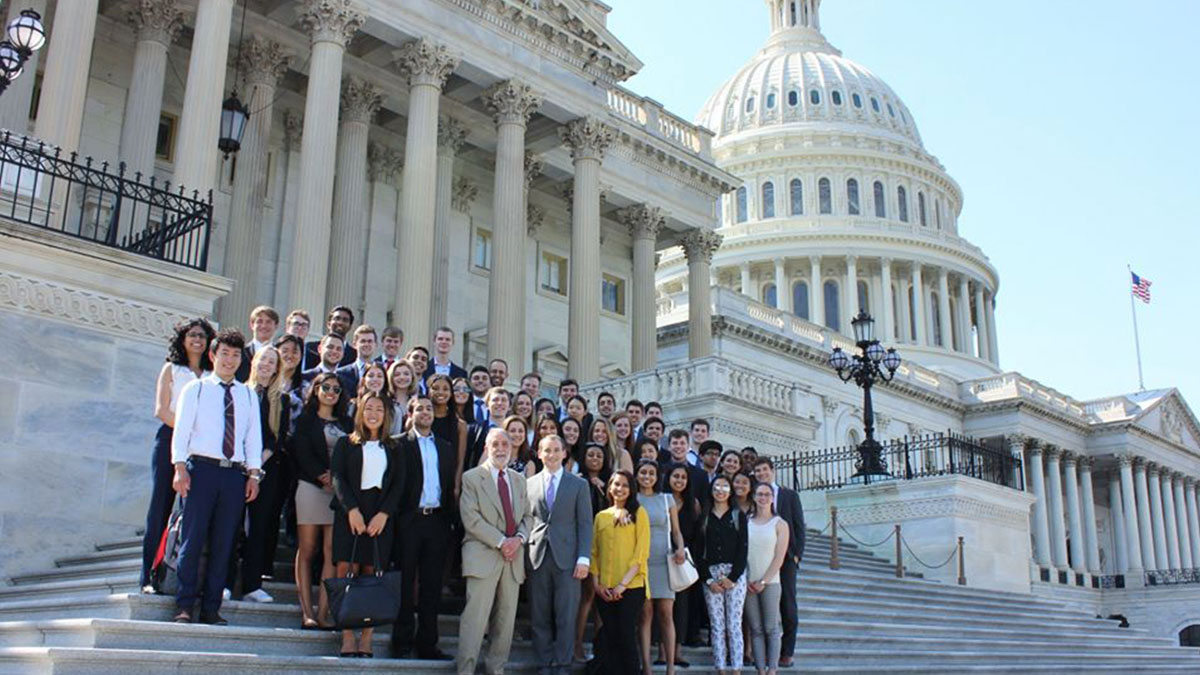 One man’s input on his college experience in the 1950s helped launch a highlight of 800 (and counting) undergraduate students’ experience at the Ross School of Business.

Upon retiring as CEO of one of the largest banks in New England, David Carson, BBA ’55, was asked what type of curriculum could have made his learning experience in Ann Arbor even better.

His answer – that students should learn more about how public policy affects business, and vice versa – led to the creation of the Carson Scholars Program, a three-credit business and public policy course marking its 15th anniversary in 2020. The course, meant to bridge the gap between government and business for Michigan Ross BBAs, includes an opportunity for Ross students to participate in a unique learning experience hosted in Washington, D.C. Students get a close-up look at public policy through visits with members of Congress and White House staff, as well as representatives from advocacy organizations and journalists.

Each year, funding from the Carson program helps cover tuition costs for 60 students. The program is led by faculty director Norman Bishara, associate dean of undergraduate programs at Michigan Ross.

A consistent takeaway from Carson Scholars participants is that the program stands out as one of the most memorable and valuable experiences of their college career.

“I remember the feeling I had during that week. I was inspired — and inspired by more than just the prospect of getting a job,” said Joseph Marshall, BBA ’11, who is now living in Washington, working as a consultant for government and public-sector clients. “I was inspired by the possibilities that the Carson program was opening my eyes to, such as the fact that business – and business education – didn’t have to be solely about financial fluency and market dominance. It could also be a force for good and an outlet to make an impact on the world.”

Carson, who retired in 2001 as CEO of People’s Savings Bank in Bridgeport, Connecticut, has appeared regularly before congressional committees since the 1960s. Throughout his career in the property-casualty insurance and banking industries, he became a go-to resource person for committees who benefitted from his expertise as a hands-on businessman who had experiential knowledge of the data and regulations.

Bishara said the course provides a learning opportunity that may otherwise be missed.

Seeing his namesake program thrive over the past 15 years has been a highlight of retirement, Carson said. “It’s still very stimulating, in part because you see public policy issues play out every day. Of course this year, we’re confronted with, ‘How do we make public policy in a post-pandemic world?’ I think all of them are concerned with knowing what is the next step in our public policy, and how will it be determined?”

This spring, the COVID-19 pandemic forced the program to migrate to a virtual format, along with spring programs at the University of Michigan. As is tradition, Carson played an important role in the opening day of the Washington-focused portion of the program. Rather than meet the scholars in person, this year he joined a Zoom meeting to greet the five dozen BBA students when the four-day program began on May 4.

Halaina Jimenez, BBA ’21, said the program opened her eyes to the possibilities of a career in public policy that she had not considered previously.

“Even though we were virtual this year, The Washington Campus and Associate Dean and Professor Bishara did a fantastic job in making our experience valuable,” she said. “In many ways, meeting over Zoom allowed us to spend more time with several guest speakers than we normally would have been able to have. I also personally felt more comfortable in a virtual setting developing and asking in-depth questions than I would have been had we been in a traditional classroom.”