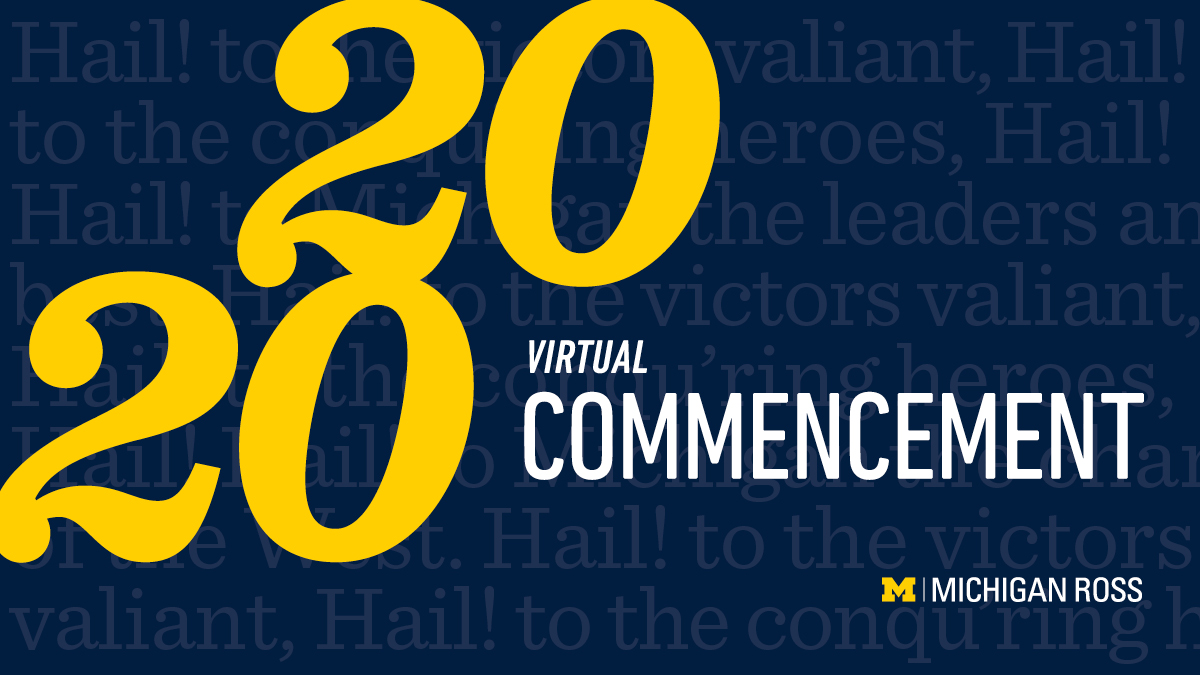 Tom Brady, BGS ’99, offered words of advice from his Tampa Bay patio. University of Michigan coaches Jim Harbaugh, BA ’86, and Juwan Howard, BGS ’95, gave motivational speeches from their homes. The Michigan Marching Band played “Hail to the Victors” via Zoom with faculty and staff of the Ross School of Business singing along.

These were just three of the highlights and surprises from the Michigan Ross 2020 Virtual Commencement. It was an unforgettable experience for the thousands of Ross students, faculty, staff, alumni, and family members who watched the first-of-its-kind ceremony online from around the world.

The event was broadcast live on Zoom from the living room of Scott DeRue, the Edward J. Frey Dean of Michigan Ross. DeRue began by acknowledging the impact of the COVID-19 pandemic, and recognizing the resilience and strength shown by the Ross community through the crisis, before congratulating the 1,584 members of the Class of 2020 on their tremendous achievements.

“We are celebrating an extraordinary group of people,” he said. “Those who have excelled in school, and who not only will excel in their careers, but who will live up to the mission of the Michigan Ross School of Business and create a better world through their contributions to business. Today you graduate from one of the top schools in the world, one of the finest academic institutions in the world.”

DeRue then started introducing the many prestigious alumni and friends of Michigan Ross who offered their words of wisdom and inspiration to the grads. Along with Brady, Harbaugh, and Howard, Stephen Ross, BBA ’64; Robin Washington, BBA ’84; Mary Kay Haben, MBA ’79, last year’s commencement speaker Daymond John, founder and CEO of FUBU and investor on the ABC television series Shark Tank; and Brad Keywell, BBA ’91 and JD ’93, appeared during the hour-long ceremony.

“We are here as one family, connected, and that’s what really matters,” said Keywell, founder and CEO of Uptake. “Even though we can’t be together in person, what we’re doing is reflective of the Michigan way. We are taking lemons and we are making delicious lemonade.”

Keywell’s words were fitting, as he was set to deliver this year’s commencement speech in person prior to the pandemic.

Keeping with commencement traditions, two students, Hiba Asad, MM ’20, and Katerina Athanasiou, MBA ’20, delivered moving speeches to their classmates, and DeRue announced the winners of the student and Neary Teaching Excellence Awards, pausing after each one for the recipient to wave to the audience joining from around the world.

Then DeRue presented degrees to the Class 2020, which were confirmed by U-M Regent Ron Weiser, BBA ’66. Finally, also following tradition, the marching band playing “Hail to the Victors” ended the ceremony — with the special touch of Ross faculty and staff appearing on screen to sing along from their homes, some with their families.

Many graduates were impressed by what Michigan Ross was able to organize for them despite challenging circumstances.

“When the students on the planning committee were told that there would be a virtual commencement, I think there was a lot of skepticism because of all the moving pieces and the potential for low viewership due to a general feeling of the senior class being upset at losing out on the chance for a regular commencement,” said Evan Oesterle, BBA ’20. “However, I think the event turned out to be an unbelievable success; between the star-studded speaker list and getting the name-reading done to give students their moment of recognition, I don't think commencement could have been any better under the circumstances.”

After the main ceremony, individual virtual celebrations were held for each program. Ross graduates, faculty, and staff were also able to share memories, photos, and well wishes in program-specific virtual memory books.

Congratulations to the Michigan Ross Class of 2020!