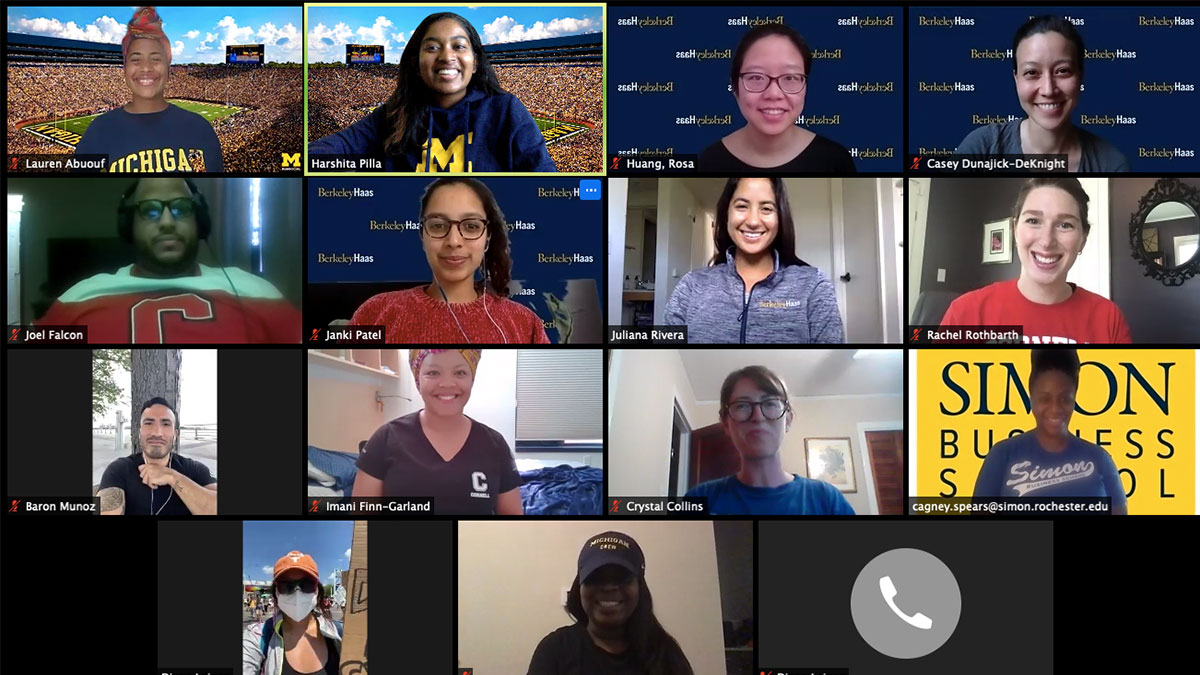 In response to the tragic deaths of Ahmaud Arbery, Breonna Taylor, and George Floyd, three MBA students who are part of the Consortium at the Ross School of Business are spearheading a fundraiser to educate and raise $100,000 to fight racial injustice.

Along with Consortium members in the Class of 2021 and 2022 from other top business schools, Lauren Abuouf, MBA ’21; Harshita Pilla, MBA ’22; and Whitney Pollard, MBA ’22, initially sought to raise $20,000 for Color of Change, the nation’s largest online racial justice organization, throughout the month of June. However, the purpose-driven MBAs quickly upped their goal to $100,000, after they met their original mark within 12 hours.

“All of us were motivated to launch this fundraiser by the global outrage for injustice and recognized an opportunity to help mobilize and gain support from our peers and colleagues,” said Abuouf. “We know that as future business leaders, we have an incredible power and a responsibility to enact positive change. That speaks directly to Ross’ mission as a business school program, and we are excited by the momentum we’ve received.”

Abuouf said they selected Color of Change for the fundraiser because the organization tackles injustices across many sectors — by placing public pressure on governments and corporations, and by advocating for legislation that affects the lives of Black Americans. “We felt that Color of Change could serve as both a rich resource database and help spur meaningful conversations within our community,” she explained.

To raise the money, Abuouf, Pilla, Pollard, and the other Consortium student leaders created an MBA Students Care fundraising page, which they shared on their own personal networks via Instagram and LinkedIn. Their efforts have also drawn the attention of media outlets such as Poets&Quants and MBASchooled.

Beyond giving money, Abuouf said they are encouraging people to get involved by sharing the initiative with their networks.

“We recognize that not everyone can donate given the current economic climate, but I believe everyone can play a role in the conversation the country is having around racial equality,” she said. “People can donate time to their own education around the economic and racial injustices facing Black Americans, and reflect on the role each of us can play in correcting these inequities when we launch our careers in corporate America after graduation.”

Rossers step up to support their classmates

At Ross, Abuouf said she and Pilla engaged their classmates in supporting the fundraiser and asked student clubs to cross-promote the fundraiser or donate a percentage of their funds from the spring term as a demonstration of allyship.

“The response has been overwhelmingly positive,” said Abuouf. “I have been really encouraged by my classmates throughout this experience, and I am hopeful that we’ll be able to continue to have honest conversations going into the school year. Something about this moment feels very different for our country, and for the Ross community.”

In addition, Abuouf believes the fundraiser speaks to the mission of Michigan Ross to use business as a force for positive change in the world.

“I think the fact that the campaign was spearheaded by Rossers — both a rising MBA2 and an incoming MBA1 — is a testament to the community of business leaders that Ross attracts and fosters,” she said. “It proves that students fully engage with the mission, both on and off campus.”

One aspect of the fundraiser that Abuouf has enjoyed most is hearing from classmates and others that they are personally inspired by the work that she and her fellow Consortium members at Ross are doing.

Abuouf is no stranger to fighting for social justice. She interned with the NAACP in Washington, D.C. in 2009, when President Obama was first inaugurated, and helped the Michigan Ross Black Business Student Association engage the greater Ross community around the #runwithmaud/#michiganrunswithmaud campaign to bring attention to Arbery’s murder earlier this summer.

Recently, Abuouf has also started sharing a series of posts on Instagram around an unofficial “color line” she sees as a Black MBA student.

“We have the most diverse student community out of any MBA program in the country, but we don’t choose to meaningfully connect with those who are different from us outside of the classroom — I personally view this as a missed opportunity,” she explained.

“There are plenty of opportunities for us to engage and check on our own biases while we are at school — be it a one-on-one conversation with another classmate, attending an allyship training, or joining an affinity club even if you do not belong to that community,” she continued. “As MBA students, we must continually ask ourselves, ‘How are we using our time to remain in integrity around the causes we say are important to us?’ ‘What are we doing to show up for ourselves and others in our community?’ If racial justice is important to you, you need to be aware and present to it, and fight for it every day.”