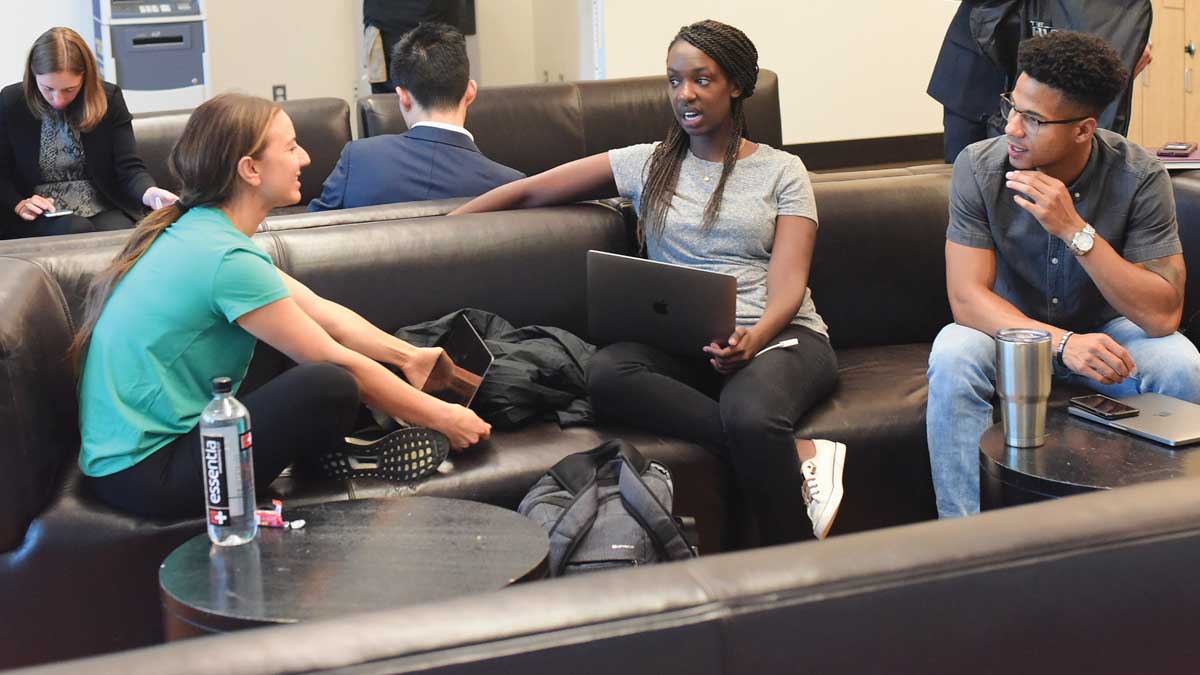 Inspired by recent events and a desire to build a more diverse, inclusive, and equitable environment, more than 200 Full-Time MBA students at the Ross School of Business participated in a series of workshops diving into the topic of allyship.

Called Allyship 101, the workshops provide a framework for students to thoughtfully engage, learn, practice, and plan what it means to actively pursue social justice on a daily basis.

“Allyship 101 was started after students began asking what they could do to move the world forward in light of COVID-19 and the recent murders of Ahmaud Arbery, Breonna Taylor, George Floyd, and others,” said Mariel Sena, MBA ’21, Ross MBA Council vice president of diversity, equity, and inclusion. “They expressed interest in learning more about how to act as agents for positive social change and in participating in an allyship learning opportunity.”

To organize Allyship 101, Sena worked with Taryn Petryk, director of diversity and inclusion at Michigan Ross. Each of the four one-hour virtual workshops addressed questions such as: what is allyship; how do you show up as an ally; and how can you commit to advocating for marginalized groups now and in the future, both personally and professionally.

“Students go through a journey of introspection and identify what aspects of their identity give them power and privilege,” explained Sena. “They also learned about the opportunities they have to make a difference, how to build a plan of action based on those opportunities, and then commit to social justice.”

Sena said workshops included large group lectures as well as small group breakouts. They also invited leaders from different MBA affinity clubs from different areas of social identity to talk about various opportunities for allyship within the context of their communities.

“We want to focus on not only how we can show up as better allies at Ross, but what people can do outside the walls of Ross,” said Sena. “I’m really excited to see how it goes — almost half of our class participated, so that’s really inspiring.”

While only rising MBA2s at Ross were invited to apply to Allyship 101 this summer due to capacity constraints, Sena said she there are plans to expand the program schoolwide.

A desire to create more allyship initiatives at Michigan Ross

Since arriving at Ross, Sena said she recognized a lack of allyship programming available to students and wanted to make it a focus of her time leading DEI efforts on the MBA Council. She believes the concept of allyship is becoming more widely used as people are realizing they have a larger role to play in social equity and inclusion.

“Allyship is a tricky word because it’s not the end goal, it's a byproduct of social justice,” explained Sena. “For change to happen, there have to be people to step up for the marginalized. Being an ally is not something you identify with, but rather it's a term that others use to describe people who show up for them.”

The topic of allyship is also personal for Sena, who said being a member of the Consortium for Graduate Study in Management  — an organization dedicated to enhancing diversity and inclusion in global business education and leadership — is one of the main reasons she came to Ross, which has the largest alumni Consortium network of any business school.

“I’m a white/Hispanic female who grew up as a white-passing person, so I’ve been motivated to use the privilege I have to make an impact in spaces where other minorities have been excluded,” she said. “As a Ross student I want to leave the school better than I found it, and thought there was an opportunity for Ross to formally ask and encourage people across identity spectrums to step up for those who are probably tired of having to step up themselves to see positive change happen.”

Ross communities already showing support for one another

Based on the strong participation of MBA students in Allyship 101 and student affinity clubs coming together to support each other following this summer’s events, Sena said she’s hopeful that the collaboration and allyship between Ross students of all identities will continue to strengthen.

“There've been a number of student clubs releasing statements about how they will support identities that have traditionally been marginalized, such as professional clubs committing to intersectional programming and diverse panels and international student groups committing to learning more about domestic and international racism,” said Sena. “Allyship 101 is one effort, but every student is in the classroom and in clubs — that’s where the real change should happen. We can give people the tools, but it’s going to be what happens inside clubs and classrooms that will really leave the legacy.”