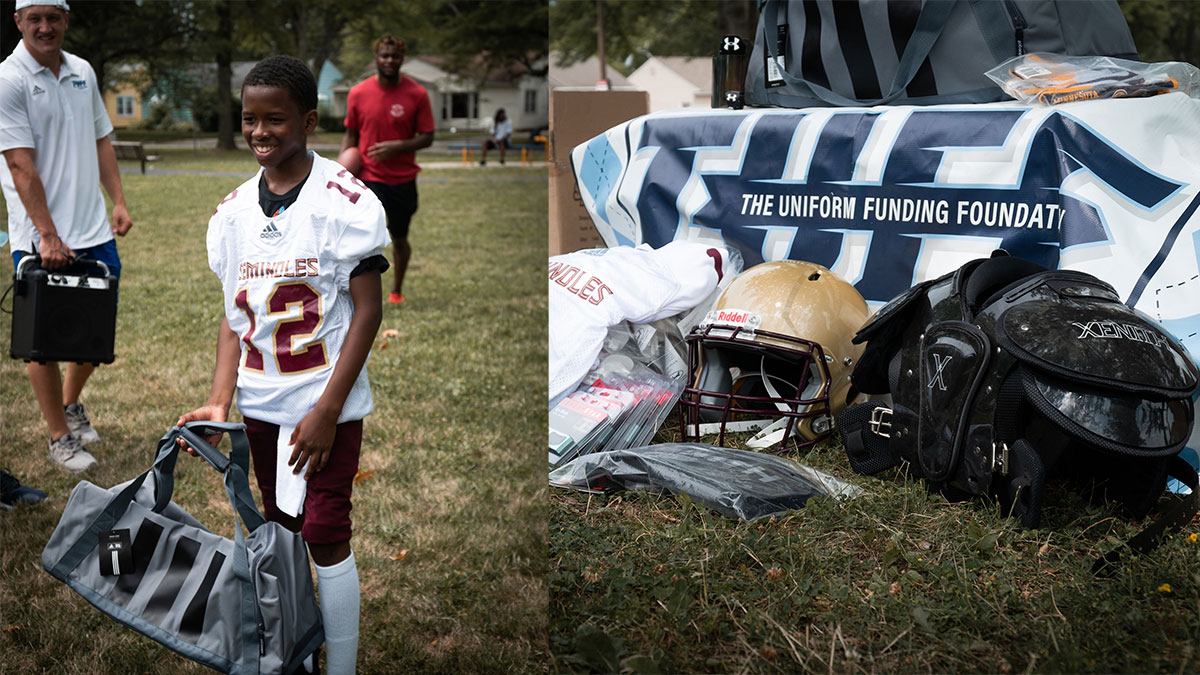 Jake McCurry, BBA ’21, spearheaded The Uniform Funding Foundation’s donation day on July 19, when uniforms and equipment were donated to 150 athletes on four youth sports teams in Cleveland. Alongside McCurry at the event were 11 of his University of Michigan football teammates and TUFF members.

TUFF is a nonprofit organization that donates uniforms and equipment to underfunded sports teams in low-income communities and offers free camps, enrichment trips, a mentorship program, and “TUFF Talks” for youth athletes. Its efforts have recently drawn media attention from The Detroit News, MLive, and Cleveland.com, among others.

Donation day is an exciting day for TUFF members as the donated uniforms they have collected are finally revealed to the youth athletes. Local media is present to capture the memories and excitement of the day. In addition to the TUFF team, professional and collegiate athletes also attend.

During the event, these athletes engage in a number of activities with the youth, such as playing games with them and conducting “TUFF Talks,” where players give advice and reflect on their time as youth athletes themselves.

Being able to connect to the youth is important for TUFF. “Mentorship is extremely important,” said McCurry. “As Michigan football players, we understand we have a platform where we can reach many youth athletes. We hope to provide advice and guidance that will change the trajectory of their lives.”

As COO, McCurry has created TUFF’s business plan to elicit donations from potential donors for uniforms and equipment by leveraging the skills and lessons learned in his Ross classes.

Giving back to these youth athletes through uniforms, equipment, and mentorship has been an eye-opening experience. The happiness and gratitude expressed by the kids is very rewarding.”
-Jake McCurry, BBA ’21

McCurry credited Entrepreneurial Management as one course that helped him significantly in developing his business plan.

“Professor Len Middleton taught the class how to write a thorough business plan, among many other things. He has significant experience in the nonprofit realm and has been a large help in providing advice,” McCurry explained.

This winter TUFF plans to donate uniforms and equipment to 30 girls’ and boys’ basketball teams in Cleveland, Detroit, and Chicago. Their plans also include expanding their mentorship program with the potential of creating pen pals by connecting the youth athletes to TUFF’s team members.

McCurry shared that his favorite part of being a part of TUFF has been giving back to the Detroit and Cleveland communities. He also emphasized the impact of the work that the organization is doing.

“We often take for granted how amazing our lives truly are. In my past three years at Michigan football, I have worn over eight pairs of cleats and over 30 pairs of gloves. Yet, when you come face-to-face with high schoolers that are borrowing gloves and cleats from their friends because they can't afford them, it puts everything in perspective,” he said.

McCurry’s plans after graduation include pursuing a career in consulting and other  strategy-focused roles where he may make a large impact on the world, community, and people around him.

This month, TUFF will launch a GoFundMe, and donations can be made on the website, which is also where youth teams can be nominated to receive uniforms.