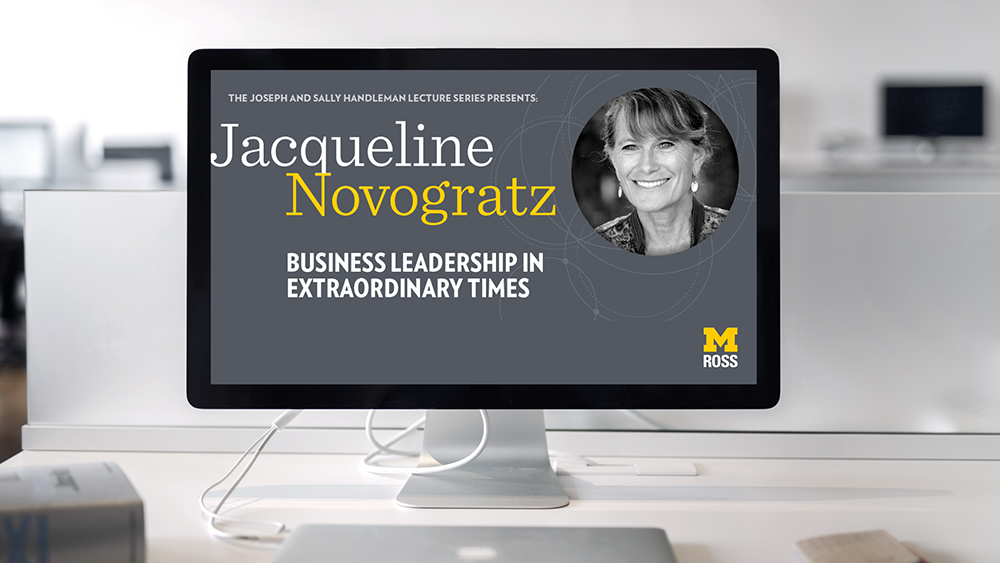 Novogratz — author of The Blue Sweater and Manifesto for a Moral Revolution, and founder of Acumen — joined Scott DeRue, Edward J. Frey Dean of Michigan Ross, for an insightful discussion on how to redefine success in business from focusing on profits and power, to prioritizing humanity and sustainability.

Around 1,500 people around the world, including hundreds of Ross students, tuned in to watch the event live online. A recording of the session is available on YouTube.

DeRue’s first question for Novogratz was on what leadership is, what it means at this moment in history, and what it means to her.

She continued that the leaders she sees excelling today are “moral leaders who are recognizing that this is an extraordinary time and it requires an extraordinary kind of leadership that truly does make decisions on behalf of others, not self.”

Novogratz shared how she learned to manage the tension of audacity and humility during a visit to Rwanda in her 20s to start the country’s first microbank. She described how when the genocide brokeout it helped her recognize that there are no good or bad people, but that demagogic leaders can take advantage of people’s fear and insecurity to make them do terrible things.

That led Novogratz to start Acumen, a global nonprofit changing the way the world tackles poverty by investing in sustainable businesses, leaders, and ideas, in 2001.

She said fundamental to the organization’s success was patiently investing in impact entrepreneurs for 10-15 years, as well as the ability to see low-income people not as recipients of charity, but with the humility to see those individuals as part of themselves.

“That requires a full-bodied skill set,” Novogratz said. “That means you have to see the world you want to create, and that's audacious, but you have to have the humility to recognize the mess that is around you, including where people get in their own way.”

"Jacqueline Novogratz's message that business should put our shared humanity at the core of its mission spoke to me because it serves to unite people, which I believe is especially important in today's polarized climate," said Connelly.

Advice for business leaders of today and tomorrow

Throughout the lecture, Novogratz shared many inspirational stories and pearls of wisdom for present and future business leaders.

She said leaders require certain skills in order to bring people together at this moment in history. Those skills include the hard skills around building character, and the soft skills of listening and identity and understanding that no one is a single identity. And on the subject of failing as a business leader, she said: “If there were a single rule, I would say that if you rule out failure you rule out success as well. And so if you hold to that, then it almost behooves you to fail.”

In addition, Novogratz took on the topics of the purpose of business, the shareholder versus stakeholder debate, and what moral revolution is needed right now.