Michigan Ross Professor Lindred Greer explains that as much as we might want to abolish them, hierarchies serve a purpose at work. 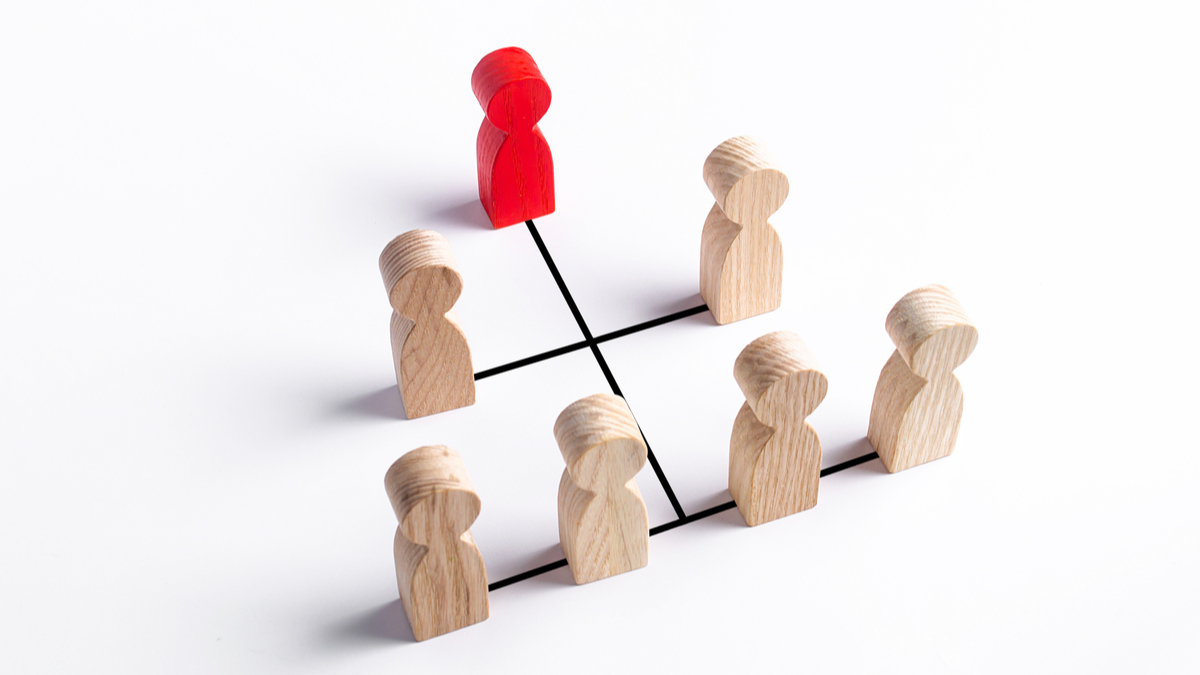 By Lindred Greer, Associate Professor of Management and Organizations

In my 20s, I wanted to overthrow hierarchies at work. When I would see bad leadership, I blamed the hierarchy — structures where certain people have more power or influence than others, forcing us into dominance and aggression and conflict.

In the past 15 years of my research, my collaborators and I have documented the many and nefarious ways in which hierarchy at work can cause tensions, conflict, and inequity. But I was forced to face the evidence that hierarchy can just as well lead to better coordination and collaboration.

I was also forced to face the evidence that “holacracy,” the most common alternative to hierarchy, doesn’t seem to work. Holacracy refers to cross-functional reporting circles that interlock across a company, and it requires incredibly complicated processes as an organization grows. Even Zappos, the most famous company to implement holacracy, is starting to quietly scale back on it.

Based on extensive research and observation, I’ve come to realize that hierarchy is necessary to get work done, and it can be a force for good — better performance, relationships, and well-being at work — if teams are structured well and led by a skillful leader. If you’re forming a team or leading an organization, these insights can help you avoid the pitfalls of toxic power structures.

The benefits and drawbacks of hierarchy at work

The power structure of an organization has a significant influence on our interactions. It changes the way we talk to people, whether we speak up, and whether we’re willing to engage in conflict. In turn, these interactions influence every business outcome that we care about: doing good in the world, working for the triple bottom line, or whatever your organization’s goals are.

If you draw a map of all the people in your organization, you’ll have a visual representation of the hierarchy. You can see how many people are at the top, whether it’s one or several leaders. You’ll see how many layers there are, and the distance between the layers. It matters how many direct reports there are to a leader, whether it’s 12 people flowing into one leader or a leader who has two second-in-commands who each have three people reporting to them.

The basic function of a hierarchy is to allow us to make sense of the world, simplify information, and make decisions. Think of it in an evolutionary sense: Back in prehistoric days, when someone said, “Throw the spear now to take down the mammoth,” it was essential to recognize their leadership. Leaders can coordinate action and make sure we are actually able to work together in groups.

In more modern times, there are studies in basketball teams showing that having a clear leader allows players to call shots better on the floor, and studies showing that hierarchical teams make better decisions.

But hierarchy can also create a competitive, tense, and unfair environment. When people above you can tell you what to do, there’s a risk for resentment, jealousy, rivalry, and conflict. People begin to dislike each other because they are competing for advancement, and the choices of who gains power often aren’t equitable. Sometimes we might engage in subterfuge behind the scenes to overthrow the hierarchy.

The other big challenge is that hierarchy can silence opinions and creativity. According to a 2012 study, when leaders have more power, they end up talking more, they’re perceived as less open, and people don’t speak up. Employees are less likely to voice opinions and to be creative.

To reconcile all these conflicting findings, my team and I reviewed research from sociology, psychology, economics, and management — from baseball teams to management teams, games won and money made — to see if we could draw any general conclusions.

The result? The overall effect of hierarchy was slightly negative. But this effect was very small, which means there is a lot of room for variability, a lot of different shapes and forms that hierarchy can take. This suggests to me that maybe it’s not the hierarchy itself that is problematic, but how it makes people feel. How can we design reporting structures in ways that are more humane?

Four keys to a positive hierarchy

My research has uncovered four different factors of work hierarchies that can lead to better performance, better relationships, and more cooperation.

1. Build hierarchies based on expertise. In a 2016 study, my collaborators and I wanted to observe how people would spontaneously structure their teams. We gave our college student participants a task: Imagine you’re trying to survive in the desert, and rank-order a list of items (such as salt tablets or a compass) by their utility. Each of them did this task on their own, and their scores were announced. Then, we asked them to choose a leader and do the same task as a group.

Rather than choosing the person who had the best score, 45% of students chose their leaders based on things like dominance, attractiveness, how vocal the person was, and whether they knew them. You can imagine what happened next: The teams that chose leaders based on factors other than expertise didn’t survive very well in the imaginary desert.

This supports the idea that it isn’t hierarchy that’s the problem, but how we promote people within organizations. What we need are objective criteria to ensure that people who are making it to the top actually have the competence to be there. This also helps promote diversity and inclusion, so that these decisions aren’t dictated by conscious or unconscious biases that have nothing to do with expertise.

What counts as expertise? The person at the top of the hierarchy should have the most general expertise about what the organization is doing. The CEO may not know as much about sales as the chief of marketing, but the CEO knows more about the company in its entirety. And she understands enough about sales, finance, and marketing to understand what the people underneath her are working on. In fact, the most important area of expertise is people skills and knowing how to manage others.

In a 2016 study, we examined the hierarchies at several hundred Dutch tax collecting teams. We found that when the leaders had the most expertise of anybody in the team, clients were more satisfied.

If the leader doesn’t have the most expertise, performance suffers. Or you get “shadow hierarchies” that emerge and start to overthrow the main hierarchy, disrupting the stability of the organization.

2. Give employees areas of ownership. One of the best ways to combat feelings of resentment and inferiority in a hierarchy is to give people power within their own domains—to allow them to specialize. For example, while I report to a department chair within my university, I am an expert in startup teams, and I’m empowered to make decisions about the startup course that I teach. But decisions affecting our whole department are my boss’s domain. This not only makes people feel better, but also makes things more organized.

The evidence for this comes from a study my collaborators and I did with startup teams. We conducted experiments around the country where startup teams did the Marshmallow Challenge, where you have to build the tallest spaghetti tower possible with a marshmallow at the top. Before they came in, we surveyed whether teams had a clear hierarchy or not.

To create more differentiation between roles—more areas of ownership—some teams performed a job crafting exercise, where each person wrote a description of what they do and a job title to go with it. The job titles they came up with were so creative, like the “Taylor Swift of Sales” or the “always-peppy Khaleesi of HR.”

The winning teams had clear vertical differentiation — a hierarchy — and clear horizontal differentiation — defined areas of ownership. (By the way, these were also the teams who raised the most startup funding in the next six months.) The hierarchy helped them coordinate, while having areas of ownership helped them feel good and be empowered to make decisions. They had a clear leader, who could also capitalize on the talents of their team.

3. Create a triangle rather than a ladder. A hierarchy can take the form of a ladder or a triangle: a single line of people with less and less power, or a pyramid where lower levels get wider and wider.

In a 2019 study, we put five-person teams into hierarchies that were ladder-shaped or triangle-shaped and asked them to work together. We found that teams with a clear rank order had lower-quality relationships than teams with a triangular hierarchy.

In a triangle, where lower levels are larger, people can offer social support to each other. You end up focusing less on status and power when you have others at the same level as you.

4. Reduce the power distance. Finally, the most effective hierarchies are the ones with a short distance between top and bottom, both objectively and according to people’s perceptions. My research on startups suggests that hierarchies may not always be experienced as such; effective teams have hierarchies but don’t always feel hierarchical — leaders can make the team feel “flat.”

For example, teams feel less hierarchical when the leader has a second-in-command. This person informally links the leader to the rest of the team, making the leader more accessible and translating what they say. Although this adds another layer to the hierarchy, it can actually make the team feel less competitive, allow people to speak up more, and reduce conflict.

One factor that seems to increase the sense of distance is having visible symbols of power. The more that power comes with advantages — like bonuses and corner offices — the more inequitable it will feel. This is also true when leaders are emotionally unpredictable, when employees don’t know what to expect from them on any given day of the week. But that doesn’t mean leaders should shun emotions altogether; in fact, organizations seem flatter when leaders are vulnerable enough to share their feelings with other team members.

Even when hierarchy exists in your workplace, it can be more or less tangible at any given moment. The best leaders know how to step back to listen with humility, letting those with the most expertise have their say, and step forward with confidence when decisive action is needed. Rather than ruling with an iron fist, they use their position to bring out the best in others and help achieve good outcomes for their employees, the organization, and the people they serve.

This essay is adapted from Lindy Greer’s talk “How to Create Positive Team and Organizational Hierarchies,” part of the Center for Positive Organization’s Positive Links Speaker Series.

Dec 7, 2020
A Biden Business Agenda: Finding New Solutions on Sustainability
Dec 3, 2020
A Better Way for Billionaires Who Want to Make Massive Donations to Society
Nov 19, 2020
How to Overcome Your Reluctance to Ask For Help at Work
END_OF_DOCUMENT_TOKEN_TO_BE_REPLACED