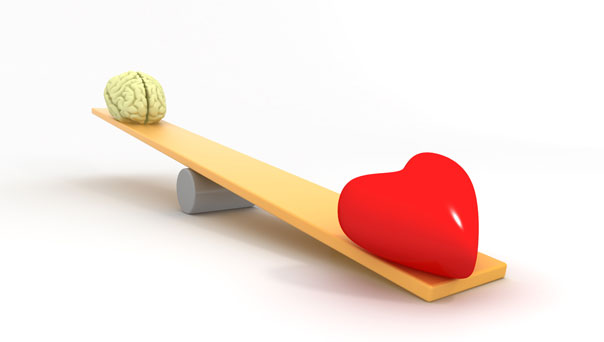 The metaphor is an old one in Western civilization — the head represents rationality, and the heart represents emotion. The link is often made in speech and literature by pointing at one’s head (thinking) or at one’s chest (feeling).

In the classic movie The Wizard of Oz, for example, the tin man desires a heart because he is without emotions, and the scarecrow desires a brain because he lacks intelligence.

New research by Michigan Ross Professor Aradhna Krishna shows this isn’t just a linguistic construct. It turns out people make real-life associations with rationality and emotions when it comes to physical placement.

“As children we can’t fully grasp abstract concepts, so ideas like ‘rationality’ and ‘feelings’ are explained with something concrete like pointing to your head or heart,” says Krishna, Dwight F. Benton Professor of Marketing. “Our results show that this subconsciously affects the way we perceive reality as adults.”

The authors ran a series of six studies that show people associate up with rational and down with emotional. Their studies suggest that marketing managers and designers should consider the rational/emotional impact of their message when placing products or information on a printed page or computer screen.

“If this was only a figure of speech, it shouldn’t matter where you place the message,” says Cian, who was a postdoctoral scholar at Krishna’s Sensory Marketing Laboratory. “The fact that it does shows this is an innate association, and marketers and designers should start paying attention to it.”

In another study that could resonate in an election year, subjects were shown ads for a political candidate that highlighted either that person’s passion or intelligence. People were significantly more likely to vote for the candidate when the message on intelligence was placed at the top, and the passion appeal was placed toward the bottom.

A real-world example is Shepard Fairey’s iconic HOPE poster for the 2008 Obama campaign, which observed the metaphor-matching principle. The world “HOPE” — with its strong emotional association — is in the lower part of the image.

This may not have influenced people with strong prior opinions about Obama, the authors say, but undecided voters might have developed a more positive attitude toward Obama than if the same slogan had been in the upper part.

Right now, Krishna and Cian say ads are “all over the place” in terms of where messages are placed. But their study with Schwarz shows that the marketing and design fields should take a closer look at how they create ads with emotional and rational messages.