How a Fat Tax Could Work

New research by Professor Kanishka Misra shows consumers pick the healthier option when they can see the price difference. 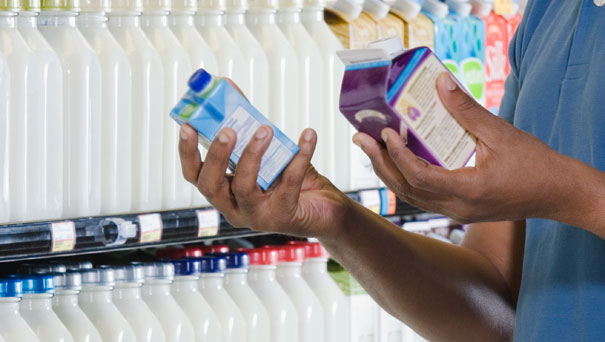 Policy makers have floated various forms of taxes on unhealthy foods as the obesity crisis shows no signs of abating. But there isn’t clear evidence on the effectiveness of so called “fat taxes” on changing consumption behavior.

New research by Michigan Ross Professor Kanishka Misra shows how a fat tax could work, and help consumers to make healthier consumption decisions. He and co-authors Romana Khan of Özyegin University’s graduate school of business in Turkey and Vishal Singh of New York University’s Stern School of Business accomplished this by taking a novel look at milk purchases.

Their paper, “Will a Fat Tax Work?,” was published in the journal Marketing Science.

Their results show that for a fat tax to nudge consumers to make healthier choices, they have to see the actual price difference on the shelf. The way milk is priced and produced allowed the researchers to see this behavior at work.

“We find that it’s really important for consumers to see the price difference right on the shelf, as opposed to a tax that’s tacked on at the checkout scanner,” says Misra, Sanford Robertson Assistant Professor of Business Administration and professor of marketing. “And we saw this in data from milk purchases, because of the unusual way it’s priced.”

Due to the way milk is processed, the more the fat content in milk the higher the cost. Therefore, whole is the most expensive, followed by 2 percent, 1 percent, and fat-free is the least expensive.

In some states retailers follow this pricing structure, where whole milk is on average 5 percent more expensive than 2 percent milk (variable pricing), and in other states, all varieties are the same price (flat pricing). Importantly, they found no demographic differences between stores with the two different pricing schemes. That gave the researchers a natural quasi-experiment.

“Even a small difference in price, 10 to 15 cents, is enough to make consumers switch,” Misra says. “Most people didn’t pick the cheapest option, but they do move down to one with lower fat content.” Importantly, the effect was highest in lower-income areas, where obesity is a more of a problem.

Misra says this can be duplicated in other food categories that have higher fat or higher calorie varieties next to healthier options — chips (fried vs. baked), and gum (sugar-free vs. sugar).

“A selective tax mechanism that lowers the relative prices of healthier options, and is reflected on the shelf, can serve as an effective health policy tool in the efforts to control obesity,” Misra says.

One worry about a fat tax would be a negative effect on retailers. Store sales are likely to suffer if consumers are encouraged to switch to lower-cost options. Misra says part of a fat tax could include a subsidy for healthier products. This could nudge consumers to make healthier decisions while keeping retailers’ revenue neutral.

“Our objective was to help policymakers have good empirical evidence that these sorts of price nudges can work, and how they work,” Misra says.