It's Not Easy Marketing Green

Environmentally responsible companies like to tout green credentials, but a study shows it’s a tricky line to walk. 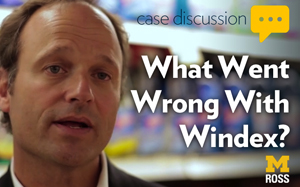 ANN ARBOR, Mich. — S.C. Johnson & Son Inc. — maker of household products such as Windex, Pledge, and Ziploc — is seen as one of the more environmentally responsible companies in the United States. So it was surprising to some when it faced multiple lawsuits for its patented Greenlist label and methodology.

How did a company that won awards for corporate responsibility and was lauded as visionary years ago for voluntarily removing chlorofluorocarbons from aerosol cans wind up being accused of greenwashing? Michigan Ross Professor Andrew Hoffman's GlobaLens case study, "SC Johnson and the Greenlist Backlash," shows how the company's experience underscores the wider problem of communicating green credentials to consumers.

"The key lesson here is, be very careful when marketing green," says Hoffman, Holcim (US), Inc. Professor of Sustainable Enterprise and director of the Erb Institute for Global Sustainable Enterprise. "When you use that message, you are marketing virtue, and virtue is in the eye of the beholder. S.C. Johnson is very progressive in terms of environmental responsibility, yet they got hit by this."

The case is part of a growing portfolio of sustainability-oriented teaching cases being developed by the Erb Institute in collaboration with GlobaLens.

SC Johnson developed Greenlist as an internal process to widen its use of green chemistry. It rated ingredients based on environmental and human health impacts. The process was developed with input from the U.S. Environmental Protection Agency, Forum for the Future, and others. Consulting firm Five Winds International later became the third-party administrator for Greenlist.

The label on products such as Windex stated, "Greenlist Ingredients. Same Great Product!" The obverse side briefly described how the rating promoted environmentally responsible ingredients and directed people to the website for more information.

Though Greenlist lessened the environmental impact of many of the company's products, lawsuits started piling up from people who felt deceived by the label. The plaintiffs argued that the label misled consumers into thinking an objective third party rated the products as environmentally friendly.

"There's a difference between reality and how you communicate it," Hoffman says. "It's really tricky. You are trying to communicate something really complicated in a very simple, easy-to-use format that's trusted. You can explain it all on your website, but that's not where people buy Windex."

S.C. Johnson eventually settled the lawsuits and removed the labels, but denied greenwashing. Hoffman says it's highly unlikely the company was trying to deceive anybody. Instead, it didn't fully consider a couple of things.

First, there is green label fatigue among consumers. There are hundreds of green labels, standards, or certification schemes.

Second is the issue of transparency. Many consumers concluded Greenlist was an outside third party. But that raises another question the case prompts students to ponder: Is a third-party certification the only way to go? The Greenlist process, internally, achieved the company's goals of improving the environmental performance of its household products. But the label, and the way it was presented, caused a problem.

It also prompts a discussion on how much emotion is involved when consumers buy green and how that can be communicated effectively.

"You'll see a beer commercial that suggests if you drink this beer, you'll have great parties at your house with beautiful people, and we just roll our eyes at that," Hoffman says. "But when a company is pitching green, it's pitching virtue. That's connected with personal values, and people get angry if they feel they've been manipulated in on that level."