New research by Professor Puneet Manchanda shows how and when people do product searches on mobile devices. 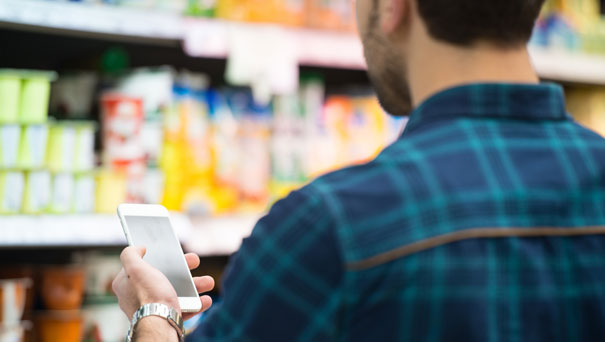 “Showrooming” has been a worry for brick-and-mortar retailers since the advent of the smartphone. That’s when a customer looks at a product on the shelf, searches online for more information, sees a cheaper price, and buys online.

But new research by Michigan Ross Professor Puneet Manchanda shows that fear may be overblown. In one of the first studies to track how and when people search for product information, he’s found that it’s not all about price for consumers.

“It’s popular wisdom that people use their mobile devices to showroom, but it looks like people are doing much more than that,” says Manchanda, Isadore and Leon Winkelman Professor of Marketing. “It seems like it might be an overblown concern. We were actually surprised by that, and other things we found.”

He and his co-authors had access to user data of over 80 million searches on a popular product search app in Germany. The company wanted to know how people were using the app, and Germany provided a good setting for the study — retail hours are tightly regulated by law. That means the researchers could easily see if people were searching during store hours or not.

The working paper, “Consumer Search Behavior on the Mobile Internet: An Empirical Analysis,” was co-written with Stephan Daurer of DHBW Ravensburg, Baden-Wuerttemberg Cooperative State University, and Dominik Molitor and Martin Spann of Ludwig-Maximilians-University of Munich.

They found that people search for product information at all times of the day i.e., not just when they were likely to be in the store. The average product search pattern on Sundays, when all stores are closed, doesn’t look much different than weekdays. What’s more, people search for three main types of information — physical attributes of the product, price, and user-generated content such as reviews.

Interestingly, people were less likely to do a price search on listings with more content, such as professional reviews and user reviews. This is a valuable finding for retailers and app developers.

“People look at all three areas heavily, but what was surprising to us is that if you have rich, detailed reviews for people to read, there’s a lower probability they would do a price search,” Manchanda says. “More information lowers price sensitivity. That even applied to product categories where price is a major consideration, like groceries.”

Their findings suggest that retailers and product information app developers should focus not only on in-store searches, but also on people who continue their searches away from the store. It also shows the importance of providing rich content for users.

The research was assisted by funding from the Marketing Science Institute.