Three major gifts to the Michigan Ross fundraising campaign are working to broaden the opportunities available to Ross students.

Support from alumni donors is critical to maintaining Ross’ ability to offer world-class programs and attract the best and brightest faculty, staff, and students. As such, the “Victors For Michigan: Victory For Ross” effort, announced in 2013, aims to raise $400 million for three critical priorities — program support, student support, and faculty support — as well as facilities.

The Ross campaign is over halfway to its goal, thanks largely to an earlier gift from Stephen M. Ross, BBA ’62, that addressed facilities needs. The Ross fundraising effort is part of the University of Michigan's historic $4 billion campaign. 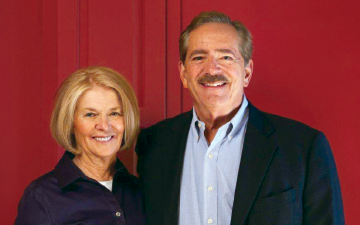 A $20 million gift from the Sangers will expand the school’s successful leadership development programming and empower more students to become leaders who make a positive difference in the world.

The Sanger Leadership Center will incorporate and expand on the current activities of the Ross Leadership Initiative — including the annual Impact Challenge and Crisis Challenge — as well as the Leaders Academy, where students create, launch, and lead actual businesses. The new center will be a resource for Ross students and provide them with personalized feedback, coaching, and development. The center will also be a resource for Ross faculty who are developing cutting-edge ideas and new leadership practices.

Scott DeRue, Ross associate dean and faculty director of the Sanger Leadership Center, said the Sangers' gift will increase the school’s ability to develop the character and capabilities of future business leaders: “It will help us create even more high-impact, high-touch leadership development experiences that students can't get anywhere else but Ross.”

Stephen W. Sanger is retired chairman and CEO of General Mills, one of the world’s largest food companies. During Sanger’s tenure as chairman and CEO, General Mills’ sales more than doubled, and earnings and market capitalization tripled. Karen Sanger was a secondary school teacher before becoming an attorney, specializing in small business law.

The Weisers have made a $50 million gift to the university, reflecting their significant involvement with the Ross School of Business as well as the International Institute in the College of Literature, Science, and the Arts; the School of Education; the Athletic Department; the U-M Health System; and the University Musical Society.

At Ross, the Weisers' gift will establish an endowed fund to support the Weiser Family Entrepreneurship Awards and support the highly successful Multidisciplinary Action Projects — learning experiences that connect MBA students with corporations and organizations around the world to develop solutions to business challenges. It will also contribute $500,000 toward the school's new and remodeled buildings, now under construction.

"The Weisers' very generous gift reflects their involvement throughout the university. Their support of emerging democracies, healthcare, teacher preparation, business education, the arts, and athletics is a tremendous vote of confidence in our work. This gift demonstrates their understanding of the need to provide opportunities for our students," U-M President Mark S. Schlissel said.

Ronald Weiser founded McKinley Associates, a national real estate investment company, and served as its chairman and CEO until 2001, when he became U.S. Ambassador to the Slovak Republic. He is a member of the advisory board of the Zell Lurie Institute for Entrepreneurial Studies at Ross and is vice chair of the U-M's “Victors for Michigan” campaign. He was national finance chairman of the Republican National Committee from 2011-13, and chair of the Michigan Republican Party from 2009-11. Eileen Lappin Weiser has served on the University Musical Society Board of Directors, is a member of the UMS Senate, and is vice chair of “Victors for Michigan.” She is serving her second eight-year term on Michigan's State Board of Education.

The Och Initiative  for Women in Finance

A significant gift through the Jane and Daniel Och Family Foundation has created the Och Initiative for Women in Finance, which is already working to increase awareness and opportunities for undergraduate students interested in the field.

The Och Initiative kicked off with a special event in October featuring a keynote by Carla Harris, vice chairman, managing director, and senior client advisor at Morgan Stanley, who is also the author of Expect to Win. The evening also featured a panel presentation by senior BBA students and several recruiting events by major financial institutions. In February, the initiative sponsored a trip to Wall Street for students to meet with executives of several leading financial institutions. Future programs, special events, and coursework will incorporate alumni mentors, hands-on learning projects, and professional development workshops.

“Lack of role models in some sectors of the economy is a challenge for students across the country as they make career choices, so we are grateful the Ochs chose to create this initiative here at Ross,” said Dean Alison Davis-Blake. “It will further our efforts to inspire more young women to consider business school and finance careers as places where they can succeed and make a positive difference.”

The Ochs also made significant gifts for facilities at Ross and in the Athletic Department. Jane Och is a former associate at Goldman Sachs. Daniel Och founded Och-Ziff Capital Management Group LLC, one of the world’s largest institutional alternative asset managers. The couple have been active at the U-M as high-level volunteers, serving on U-M’s Victors for Michigan campaign leadership board. Jane Och also serves on U-M’s President’s Advisory Group and the Ross BBA Advisory Committee.

Help Define the Next Generation in Business Education.

"Victors For Michigan: Victory For Ross" is focused on three critical priorities — support for programming, students, and faculty.