I was recently asked to play host to Ndaba Mandela, the grandson of the late Nelson Mandela, for two days while he was here in Ann Arbor to deliver an address at Michigan Ross on MLK Day. Obviously I said “ABSOLUTELY, YES!”

Like any Ross MBA would, I spent countless hours examining every piece of literature I could find about Ndaba Mandela. Then, when he arrived, and I was helping him unload his baggage, all of my research went out the window.

I uttered the first thing that came to mind: “How’s do you like…ummm…South Africa?”

An embarrassing trip-up, but I would soon find Ndaba Mandela to be one of the most insightful, easy-going, and earnest people I had ever met.

I capitalized on the opportunity to have his ear by taking him to lunch at a Korean BBQ restaurant (which he posted on Instagram, naturally). There, we talked for hours about his upbringing, his interactions with his grandfather, and his perspective on various political issues.

There were three distinct nuggets of wisdom I learned from Ndaba over the course of our time together - and I’d like to share those with you.

Ndaba spoke with me very passionately about his organization Africa Rising, which he was inspired to start as a result of the disappointment he felt when people asked him about his home country of South Africa.

He explained that most people would ask him, “How is the crime there?” or “Have you ever seen a lion?” or “How’s do you like...ummm...South Africa?”

People have limited knowledge about the region, and the lack of awareness of Africa’s rich heritage prompted Ndaba to take a stand. Africa Rising’s mission is to empower young Africans to accomplish their personal goals and take pride in their heritage. As Ndaba’s way of taking action, Africa Rising publicizes positive images through print, film, and media about Africa’s traditions. They also teach youth about the importance of embracing their African culture as a way to help spread awareness.

Through our conversation, Ndaba continued to reiterate the importance of unity as a catalyst for change. He mentioned that one of the major challenges in improving economic conditions in Africa was the lack of communication and shared resources across African countries.

“Countries will make progress in one area, but that progress means nothing if we have no idea about what is going on,” he said.

In this same vein, I asked him about his perspective on the “Black Lives Matter” (BLM) campaign occurring across the United States.

Repeatedly, he made it quite apparent that a lack of unity in decision-making and the lack of sharing ideas had halted some of his own attempts to make positive change. He said it was important to avoid such discord in gaining momentum for initiatives such as the BLM movement.

“In order for progress to occur, individuals, regardless of individual opinions and/or backgrounds, need to unite toward a common goal,” he said.

“Bring them a bottle of brandy, a white liquor, a sheep, and make them feel like the boss!”

Ndaba told me how he gave this advice to a woman having difficulty communicating with a South African official because he wanted to show her the value of understanding African customs and traditions, an important step in trying to influence an official’s decision making.

Oftentimes when attempting to make changes or have influence, we do not take the time to truly understand the context of the communities or people we intend to impact, he said.

Hearing this from Ndaba inspired me to find more ways to take advantage of various cultural opportunities at Michigan, and to develop a more diverse perspective to better understand people. In turn, I believe that these experiences will only strengthen my capacity to affect change.

Spending so much time with Ndaba was extremely humbling - and I am honored to have been allowed to escort him. After hearing feedback from fellow students who attended his lecture, I realize that his words moved many others as well. I look forward to seeing the action, unity, and influence that result from him sharing his wisdom with the Michigan Ross family.

Watch Ndaba Mandela’s “The Power of One” Lecture

Darryl Tricksey is a first-year MBA student. He will graduate in May 2016. 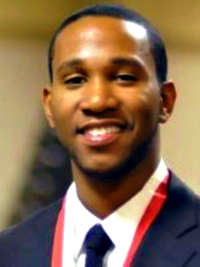