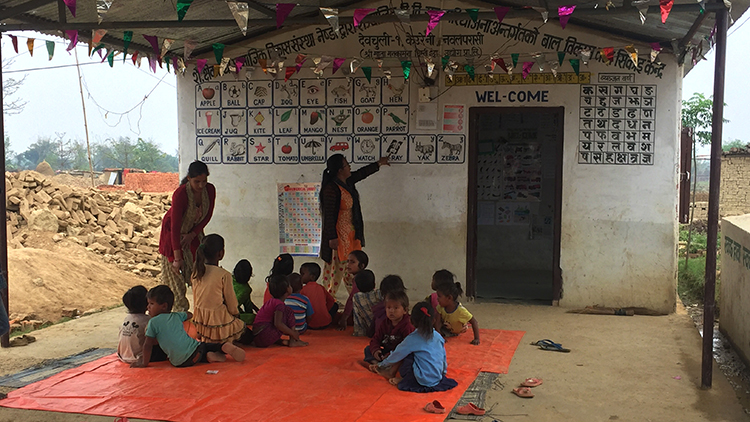 As part of Ross MAP, our team is working with the Global Fairness Initiative and Better Brick, a nonprofit that is influencing stakeholders in the brick industry in Nepal to purchase and source ethical bricks that are free from child, forced, and bonded labor.

Better Brick is heavily funded by two international organizations through grants, a funding model that our team is tasked with changing in a big way. We need to identify how Better Brick can generate revenue from activities and resources they provide in order to sustain the organization without relying heavily on this grant funding. It’s no easy task!

As part of our project, we traveled to Kathmandu for two weeks to see firsthand the issues faced by brick kilns in Nepal.

This was the first time a Ross MAP team has been to Nepal, and we were excited to learn how we could help this organization make a real impact and influence an industry and a country that was in desperate need of change.

"This Is Someone Else's Responsibility"

We landed in Nepal and took off running. In two weeks, we conducted more than 30 interviews with various stakeholders ranging from the laborers in the brick kilns to the government officials who influenced labor policies.

In our meetings with government officials and various stakeholders, we discussed the challenges of enforcing policies that would effect real change in the labor practices in these kilns. We became accustomed to people telling us that it was nearly impossible to change the industry without the support of the government.

When we discussed these concerns with government officials, they commented that they were working to implement policies, but enforcing those policies was another challenge in and of itself. At this point, our frustration started to build — it became evident that stakeholders were aware of the issues, but implementing changes was so challenging that at times it seemed like it would be easier to just say, “This is someone else’s responsibility.”

But then, during our last few days in Nepal, our team traveled out to the Chitwan region of Nepal, right along the border with India, and we met the people who restored our hope.

We were pleasantly surprised when we arrived at a brick kiln in the Chitwan region and we were greeted with smiles and flowers by the brick kiln owner and employees. This brick kiln owner had been working side by side with Better Brick, implementing policies they recommended to improve labor conditions in the kiln.

With the help of Better Brick, they built schools around the kiln for the children to attend during the day while the parents worked. The kiln is also exploring ways to improve wages and salaries to eradicate forced and bonded labor issues. Our team found a glimmer of hope for the Better Brick mission when we visited this brick kiln.

After a week of interviews that seemed to point to discouraging news for this organization, it was incredible to see that there were brick kiln owners in Nepal that were challenging the norm and that were committed to making a positive change in their industry and for the people of Nepal.

It would have been all too easy for our team to look at this project, see all the issues and challenges Better Brick faces, and tell them they might never solve this problem. But after meeting with the brick kiln owner in Chitwan, our team started to realize that while it might take time, there can be a real change that Better Brick can make in this industry and to labor practices throughout Nepal.

We are very fortunate to be part of this project, and we look forward to presenting recommendations that will continue to sustain Better Brick to ultimately eradicate child, forced, and bonded labor in the brick industry in Nepal for good.

Molly Hope is a rising second-year student in the Michigan Ross MBA Program. Prior to Ross, Hope served in the U.S. Military.

This is an entry in a series of blogs from first-year students participating in the 25th Anniversary of the MAP program. Learn more about MAP and read other posts.

More about the Ross MBA