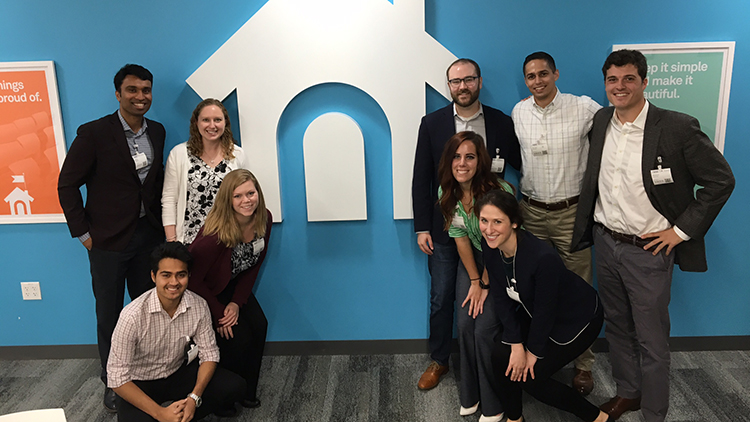 Recently, over fall break, I flew out to San Francisco to lead a group of nine MBAs on a career trek for the Energy Club here at Michigan Ross.

Over three days we visited nine companies, ranging from a solar developer to a cleantech venture capital firm to one of the largest utilities in the country.

Our trip began with a visit to eMotorWerks, a promising EV charging station startup in an unassuming warehouse location south of the city. They hinted at some exciting new developments in the works, and they did not disappoint - just two days later, eMotorWerks was acquired by one of the largest power companies in Europe! This just goes to show how promising the electric vehicle market really is.

We were hosted by Ross alumni at Advanced Microgrid Solutions and Geli, two other startups in the emerging energy storage market. Geli’s Director of Marketing Andrew Krulewitz, MBA ‘15, talked about his experience working for a small company. He originally did his summer internship at Geli when the startup had just four employees and has since seen the company grow to over 30 people.

We also visited some much more established companies, such as the Alphabet-owned Nest, where we learned about the latest version of its smart thermostat and the company’s new initiative to get it in a million low-income households.

At Pacific Gas & Electric, the major utility based in San Francisco, we were lucky enough to join the monthly gathering of the MBA Leadership Program. Along with meeting the program participants (which included two Ross alums!), we had the opportunity to ask a senior director questions about her 30+ year career with the utility.

And to top it all off, I happened to sit next to a 1996 Ross MBA alumnus on the plane ride back!

One of the most important things I learned from this trip - before we even began it - was the power of networking. After learning that the Energy Club didn’t have a trek planned this year, my classmate Greg Phillips and I sprung into action to plan one in just three weeks. It never would have come together so quickly if we hadn’t been able to leverage connections through Ross as well as our previous careers in energy.

If they haven’t already, I would encourage my fellow MBAs to start building a network in their target industry, even with companies they don’t necessarily want to work for - you never know when a random old connection will come in handy!

My other takeaway from the trek was the vast range of companies in energy and cleantech. My background is in solar, but it was fascinating to learn more about the growing energy storage and smart grid markets. This sector is destined to be an enormous part of our economy and job force, and my hope is that more Ross MBAs consider the diverse opportunities available in energy.

The new album from The Lone Bellow