Raising the Bar: How My MAP Team and I Tackled a Project for Founders Brewery 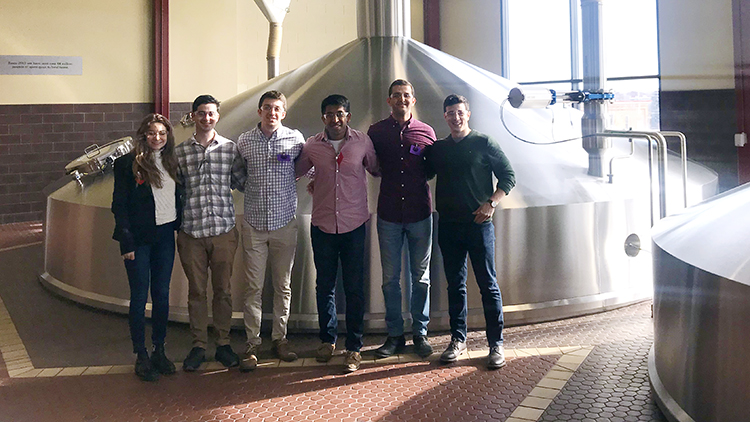 What other class gives you the ability to work for a premier craft brewery, interview key stakeholders both domestic and abroad, and present findings to senior leadership?

When I found out that Founders Brewery would be the sponsor for my Capstone MAP project, I was thrilled. Our task was to help design an international model for expansion.

With no previous consulting experience, I felt a bit nervous to tackle such a complex task and provide recommendations to accomplished professionals.

After meeting the Founders team at their headquarters in Grand Rapids, my anxiety was replaced with excitement. We immediately connected with the team over lunch and learned more about their history and operating activities during a tour of the facility. We finished the day in a meeting with the vice president and manager of the international group, where we learned more about the brewery’s international vision and gained insight to narrow the scope of our project.

In the following weeks, we began conducting research to gain an in-depth understanding of the craft beer market both domestically and abroad. At the same time, we began developing our initial hypothesis for expansion... and of course supporting it with even more research!

With six students working on the project, we encountered our first roadblock a few weeks in: scope creep. Our initial momentum began to slow as internal debates heated up on the scope of the task and overall direction of the project.

We soon learned that the best way to ensure that our progress was aligning with the sponsor’s goals was to keep an open line of communication. Luckily for us, our point of contact at Founders was readily accessible, and we were able to develop a great relationship with him.

The second challenge we had to overcome was coordinating our work and research amongst everyone in the group. We found ourselves at one point working from deadline to deadline, barely able to plan ahead due to some disorganization. We often were not aware of work being completed outside our own workflows, making it difficult to coordinate and plan as a group.

We attended a project management workshop that was run by a former McKinsey partner, which helped us immensely. Through the workshop we learned how to clearly organize workflows across our group and develop a long-term work plan, which allowed us to tackle our project in a more intentional and organized fashion.

As the semester progressed, our team did experience some growing pains. But we learned so much from those difficulties! From the importance of project management, to managing a client relationship, I now have a much better sense of what makes a client engagement successful.

I am very glad I decided to take part in the Capstone MAP program. It’s an experience I will carry with me for a long time. Cheers!

Where did you get your undergrad degree?

I had an internship with Brown Brothers Harriman & Co. working as a Summer Analyst for their Alternative Fund Services

What's the last thing you watched on Netflix?

More about the Michigan Ross Master of Management Program