From Crisler to Zoom: How We Planned Virtual Commencement During a Pandemic 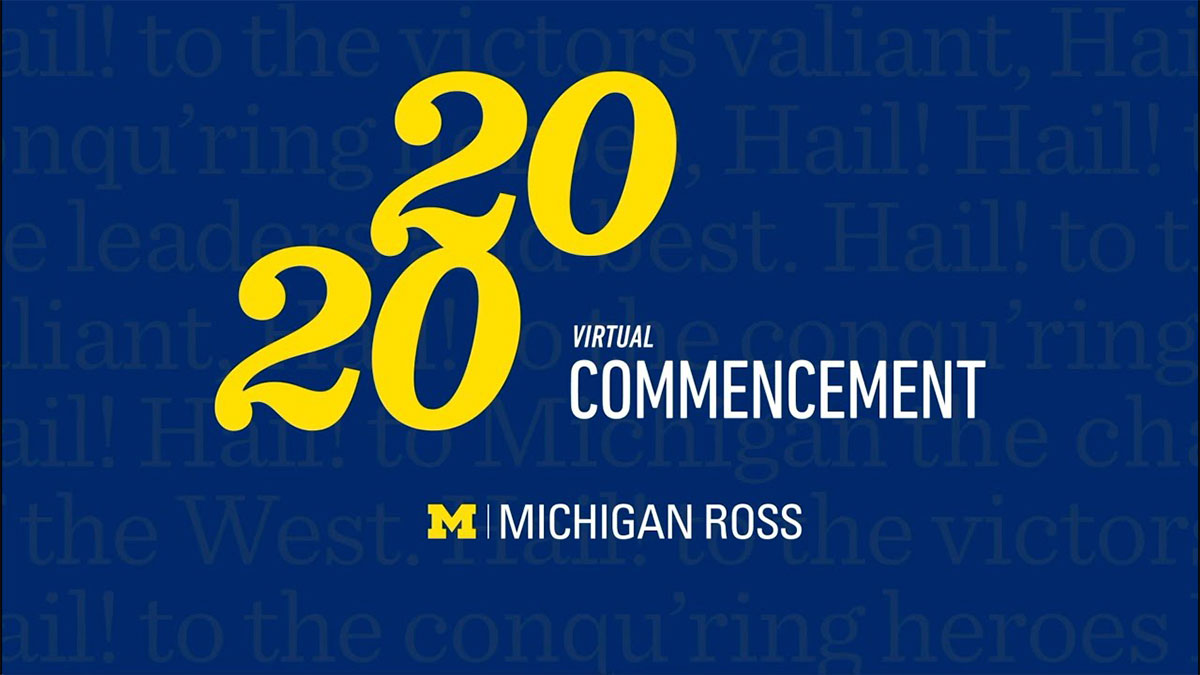 I was among the students and faculty who were tasked with rethinking the Michigan Ross commencement in less than four weeks to celebrate graduates and send them off into a world that no one could have imagined a few months earlier. It wasn’t easy, but together we produced a virtual event that greatly exceeded our expectations.

The day before Spring Break, I accepted an offer from Lisa Kozlo, director of undergraduate experience at Ross, to be a name-reader at the Ross commencement ceremony on May 1. However, just days after we returned to campus, the University of Michigan canceled in-person classes as COVID-19 began quickly spreading around the U.S. We began asking how long the virus would disrupt our lives.

To say that the last two months have been hard would be an understatement. People have lost loved ones, jobs, and more that can’t be put into words. For the graduating Ross Class of 2020, the abrupt ending to practically everything was a devastating conclusion to an amazing four years. So, I was skeptical when Lisa reached out again, six weeks after the initial request to be a name-reader, inquiring about my interest in joining a planning committee for virtual commencement. By then, in-person commencement had been canceled and the idea of graduating on Zoom just didn’t seem the same. But if there was going to be an attempt at putting the event together, I decided I wanted to be a part of it.

My committee was made up of four Ross staff members and eight students. As the administration planned the main event, our task was to decide how to best celebrate the graduating class of BBAs.

When we first met as a committee, there were 22 days until the scheduled virtual commencement. We had a lot of questions about what such an event would look like and if people would even be interested in watching such a celebration. Making things more difficult, the students on the committee were dealing with the transition to online classes and had finals on the horizon, with some also moving from Ann Arbor during this time. The staff members had their regular responsibilities on top of planning a commencement. But over the next three weeks, we battled tight deadlines and uncertainty to piece together the virtual celebration.

Early in our meetings, we discussed what virtual commencement wouldn’t or couldn’t be, but the conversation quickly shifted to what we could do. This serves as a reminder during these trying times: Very little makes sense right now, but making the most of our lives has never been more important. It would’ve been very easy for Ross to punt on a commencement event entirely and focus on a potential makeup next spring. But that isn’t the mindset that’s taught or practiced here; rather, the mindset is to define problems and create solutions. That’s exactly what happened.

Going in, we knew at the very least that virtual commencement was going to be an event that gave the graduating class finality. It would allow family and friends to plan celebrations, even if they weren’t as grandiose as original plans may have been. But the way that it played out on the morning of May 1 was so much more than that.

A star-studded list of speakers that included Tom Brady, Brad Keywell, and Stephen Ross himself helped Dean DeRue deliver an exciting hour of messages to send off the graduates. Then, the BBAs got to thank their family, friends, and professors via message submissions, share memories through pictures, hear their names read, and hear some final words of wisdom from the faculty members that inspired them throughout the last four years.

Given the circumstances, I don’t think the event could have possibly been any better. It was the perfect way to virtually send off the graduating class, even though it wasn’t how we planned to celebrate our achievements.I’ve never been prouder to be a part of the Ross community than I was that morning.