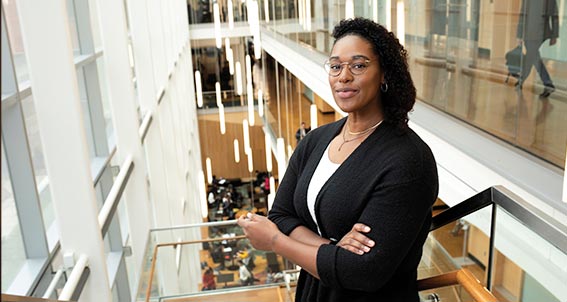 Naja Edwards is a graduating MBA from Chicago, IL. In 2012, she graduated from the University of Illinois with a Bachelor of Science in aerospace engineering. Prior to Ross, she worked for Boeing as a propulsion engineer for both military and commercial programs. During her time at Ross, Naja focused on business and data analytics. Naja also was an intern at Amazon headquarters as a senior product management technical in AWS. In her free time, Naja trains in Olympic weightlifting and enjoys experiencing new cultures through art, music, and travel. In addition to serving as president of the Ross MBA Council, Naja is also the Class of 2020 Section 2 president, an International Investment Fund member, BBSA 2018 UpClose Committee Social Chair, and served on the BBSA 43rd ALE Committee Logistics Team. After graduation, Naja will be an operations associate at McKinsey. 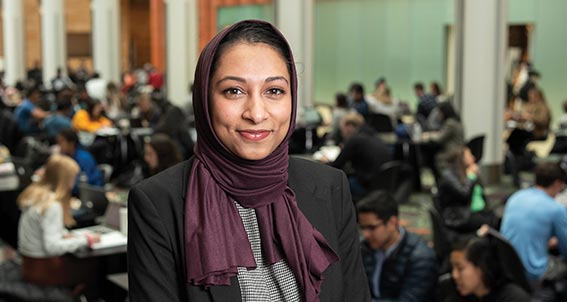 Hiba Asad is graduating with a Master of Management, with focuses in marketing and organizational management. During her time at Ross, she served as a +LAB Lead fellow for the Center for Positive Organizations, and vice president of the Muslim Business Students Association. An Ann Arbor native, Hiba also attended U-M for her undergraduate degree, graduating with a Bachelor of Science in psychology in 2019. In her free time, she enjoys art, design, and community-building. 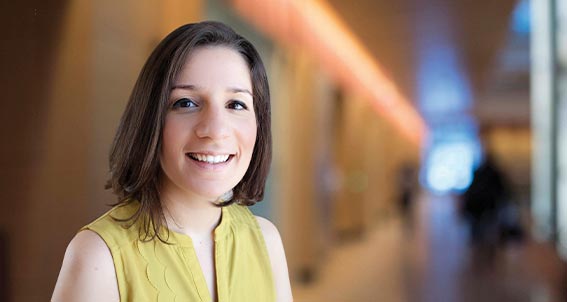 Katerina Athanasiou was raised in West Orange, NJ and holds a bachelor’s degree from Cornell University. After graduating, she spent four years working for New York City Parks as an urban planner. At Ross, Katerina co-led the Smart Cities Club, and served as an Open Road fellow and academic chair. Her journey would not be possible without her parents, for whom she is immensely thankful.

Student award recipients were selected by their graduating peers for being exemplary role models who display continuous dedication to the Ross School of Business.

The Frank S. Moran Distinguished Leadership Awards are presented to two graduating students who have made outstanding contributions to improve the business school experience for students, staff, and faculty, and have been active in all aspects of the Michigan Ross community. One award is given to a student in a graduate program, and another award is given to a BBA student. Both are supported by a special endowment honoring Frank Sullivan Moran. Frank Moran was not just a successful business leader; he also was a philosopher and educator who cared deeply about helping people.

Hailing from Chicago, IL, Naja is a graduating MBA with a focus on business and data analytics. She served as president of the Ross MBA Council and was a part of several other organizations on campus. Naja received her bachelor of science in aerospace engineering from the University of Illinois in 2012 and went on to work for Boeing as a propulsion engineer for both military and commercial programs. After graduation, she will join McKinsey as an operations associate.

Maximillian is a young whippersnapper hailing from the small town of Rancho Cucamonga, CA. Although he is a Californian through and through, his love of Michigan has grown every day with every person he has met and every lecture he has attended. He is a graduating BBA with an emphasis in finance and a minor in performance arts management. Although his adventure at the University of Michigan has come to its conclusion, he will forever hold U-M in his heart and always consider it his home.

The Ross Global Citizenship Community Service Awards are presented annually to the graduating students who have made exemplary contributions to their community — both at Michigan Ross and beyond. Each award recipient designates the charity of his or her choice to which the award stipend will be donated. Conceived in 1998 by students of the Ross Global Citizenship Club, this award is supported by an endowment created through gifts from club members, students, faculty, staff, and alumni.

Vishnu is a graduating international MBA student from Kerala, India. He served as vice president of global student experiences on the MBA Council among other roles at Ross. Prior to Ross, he received his degree in mechanical engineering at the Indian Institute of Technology, Bombay and worked in the data analytics consulting space in the U.S. for seven years. After graduation, he is headed to A.T. Kearney in New York to begin his dream career. A donation will be made in his name to The Trevor Project, a non-profit supporting LGBTQ youth with counseling & support services.

Kush is a graduating BBA, originally from Long Island, NY. While at Ross, he was a First Year Experience peer coach and the vice president of undergraduate engagement on the BBA Council among roles in other campus organizations. Post-graduation, he plans on taking his insights from his global experiences and coursework to begin an international marketing career in the consumer packaged goods industry. A donation will be made in his honor to the CDC Emergency Response Fund.

The Michigan Ross Outstanding Leadership Awards recognize graduating students who have made impactful contributions and demonstrated outstanding achievement within the Master of Management, Master of Supply Chain Management, Master of Accounting, Global MBA, Evening MBA, or Weekend MBA programs. The Sanger Leadership Center is the first sponsor of this award. Sanger's mission is to build a more connected, creative, and prosperous world, one leader at a time.

Taylor was born in Ann Arbor and raised in The Woodlands, TX. She received a bachelor of accountancy from The University of Mississippi in 2019. Taylor always dreamed of attending U-M and was elated when she was accepted into the MAcc program at Ross where she served as president of the MAcc Student Association. After graduation, she will return to Texas to start her career at Deloitte in their multistate tax practice in Houston.

Blake Washington, raised in Southfield, MI, devotes himself to leading through service and living his life for Jesus. At a young age, he suffered from meningitis that left him with moderate hearing loss, but he has been blessed to overcome this challenge and went on to excel as an undergraduate student at U-M. Blake studied computer science and was a member of the track and field team, soon after, he became a Master of Management student at Ross. He has accepted a position in software engineering.

Vikas is a graduating MSCM student. Prior to Ross, he was a chief management engineer on large oil and gas ships, and also holds expertise in the clean energy and sustainability sector. After completing over 400 maritime operations across 60 countries, he sought action-learning at Michigan Ross to better understand supply-chain and learn to make more informed business decisions. Post-graduation, he will continue in operations stream with the Amazon Pathways Program.

Born and raised in Ohio, Kapil received a bachelor of arts from The Ohio State University where he studied theatre and international studies. Kapil then joined Teach For America and became a science teacher in public schools in the rural south. After completing his service, he joined Google where he works on digital marketing strategy and has been there for four years. During his time at Michigan Ross, Kapil served as president of the Weekend MBA Class of 2020 in his first year and president of the PTMBA Association in his second year.

Lucy completed her undergraduate degree at Grand Valley State University. She went on to work in logistics and transportation in Atlanta, GA, and then returned to Michigan to pursue an account executive role with Penske Logistics and to pursue her MBA at Ross. Lucy served as a student ambassador, Functional Accountability Career Team group leader and peer coach, and was a member of other clubs. After graduation, Lucy will return to PwC Advisory in Chicago, where she completed her internship last summer, as a senior associate.

Yuta completed his MBA with a focus on strategy and technology, resulting in a data and business analytics concentration. He also served as class president and committed to organizing meaningful events for his class. Prior to business school, Yuta worked at JX Nippon Oil & Gas Exploration, the largest oil and gas group in Japan. Combining his passions for energy and social impact, he looks forward to making positive differences in these industries after graduation.

The Neary Teaching Excellence Awards are selected by the student body in recognition of outstanding contributions to their academic learning experience at Michigan Ross. All awards are presented at the respective program’s commencement celebration. The stipends that accompany the awards are made possible by the generosity of Robert D. Neary, BBA ’55, and Janet E. Neary, AB ’54. Mr. Neary’s career spanned 38 years with Ernst & Young, and both he and Mrs. Neary have been actively involved with the university since graduation. The Nearys’ support of these awards affirms their belief that teaching excellence is largely “the ability to make the pursuit of knowledge an exciting endeavor ... the kind of excitement that is contagious and long-lasting.”

Aflaki is an associate professor of operations management. He is visiting Ross from HEC Paris where he serves as the academic director of the operations module in the EMBA program.

Burson is an associate professor of marketing. She explores judgment and decision-making in consumer behavior, including biases in self-assessment and their effects on product choice.

Gallo is the Coopers and Lybrand, Norman E. Auerbach Assistant Professor of Accounting, and a Jones Research Scholar.

Gao is an assistant professor of strategy. His research focus is strategy in nascent industries, technology and innovation, entrepreneurship, and nonmarket strategy.

Leroueil is a lecturer at Michigan Ross and the vice president of healthcare for the William Davidson Institute. Her research is focused on applying business practices to sustainably address human health needs in emerging markets.

Narayanan is the Robert Morrison Hoffer Professor of Business Administration and a professor of finance. His current research focus is on corporate governance.

Rogala teaches business law courses and helps students learn how the law impacts us personally and professionally. Aside from teaching, she researches methods to improve course content and delivery.

Rogers is an associate professor emerita of management communication. She is one of the two faculty members overseeing the Global MBA Multidisciplinary Action Projects at Michigan Ross.

Yu is the Arthur Andersen Professor of Accounting. Her research focuses on how accounting information affects various real economic outcomes, especially in an international setting.